Being stuck at home can be boring. The DI Arts staff has taken advantage of a few sources of entertainment that have become available while the CDC recommends practicing social distancing. 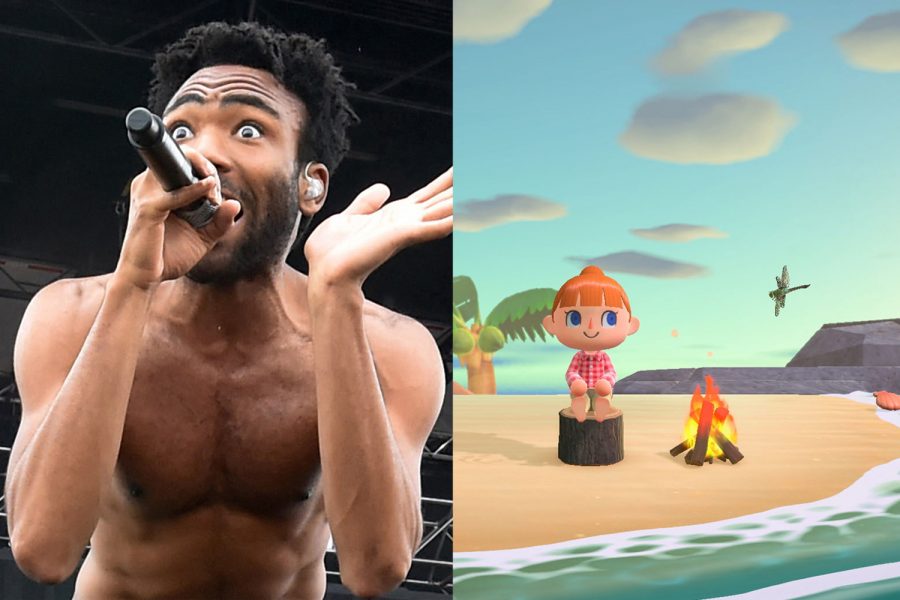 (Left) Childish Gambino performs before the 140th running of the Preakness Stakes on Saturday, May 16, 2015. (Kenneth K. Lam/Baltimore Sun/TNS) (Right) Animal Crossing: New Horizons "The outside world is full of wonder." (Nintendo)

As COVID-19 continues to sweep the globe, the CDC recommends practicing safe social distancing to keep ourselves and our loved ones safe and healthy. While the prospect of being stuck at home for weeks on end is not every person’s ideal way to spend their spring break, a few new entertainment releases the DI Arts staff has taken advantage of may offer a way to stay entertained — while also staying safe.

Although it’s not exactly the tropical getaway that spring breakers were looking for, Animal Crossing: New Horizons, released March 20, brought island-living to the Nintendo Switch, and it couldn’t have come at a better time.

At the time of writing this, I’ve been self-isolating for a little over a week now, so I was more than ready for a new distraction. I was surprised to find New Horizons provided me more than just a new way to pass time.

Self-isolation has had myself and several friends that I’ve spoken to (via text and FaceTime, of course) feeling unproductive, secluded, stressed, and in need of a creative outlet. New Horizons provided solutions to all of those problems in one wholesome package.

Like its predecessors, New Horizons is a fairly simple game with a charming aesthetic. The game has two primary objectives: gather materials and do-it-yourself guides to improve the island, and befriend the island’s other inhabitants.

Players can also visit the islands of other players, so long as they have access to wireless play, and can create custom designs for their avatar to wear or decorate with.

Shortly after I began planning, gathering materials made me feel more productive. Even though it’s just a game — and chopping wood from trees is as easy as clicking a button — collecting materials and building new things for the island felt rewarding.

Since online classes at the University of Iowa have been postponed for another week, I haven’t had much structure in my life since spring break began. Having a clear goal and completing it feels good during times of uncertainty, even if that goal is just to gather 30 virtual pears. The low-stakes nature of the game and the cute animation style is stress-reducing and takes my mind off the real world for a little while.

Additionally, I found the creative outlet I was looking for. New Horizons’ custom design feature provides plenty of opportunity for originality.

Players can create pixel art that can be displayed on their avatar’s clothing or around the island. It’s easy to get the hang of, and more addictive than expected.

Since nobody can be sure how long we’ll be self-isolating, I find some comfort in knowing that there’s a game that both eases my self-isolation blues and will have new content as time goes on. While I can’t be sure of what’s coming next, I do know there are friends and activities waiting for me on my virtual tropical island.

A variety of streaming services are providing deals to cure boredom while practicing safe social distancing. Although every service isn’t entirely free, now that we’re in a global pandemic, free trials come in handy.

Hulu and Amazon Prime Video give users a 30-day free trial. Showtime is giving new users a free trial for 30 days when they sign up before May 3. Netflix, and Apple TV, HBO Now, and Disney+ are all offering a weeklong free trial. Disney+ also offers bundles with Hulu and ESPN.

Netflix Party is a new way that users with Google Chrome can freely watch movies and shows with their friends from the safety of their own homes. It’s a way for friend groups who typically have movie nights to continue their traditions, while also social distancing.

There are also free streaming services that come with ads.

Personally, I’ve been using Netflix and Amazon Prime to watch TV shows and comedy specials. I finished “Chicago PD”’ on Prime before the chaos ensued and I was still in my dorm, and then moved to Netflix to watch “Legacies”. Last night, I watched Taylor Tomlinson’s special “Quarter Life Crisis” on Netflix, as well. Yesterday, I made the decision to use the free trial from Broadway HD to fill my theater void.

For those who are deeply missing the theater while performance venues are closed down, there are alternative ways to ease the pain.

Broadway HD has a 7-day free trial with musicals like An American in Paris, classic shows like Oklahoma starring Hugh Jackman, and Shakespeare plays like Romeo and Juliet with Orlando Bloom. Globe Player streams other Shakespeare plays like Hamlet, A Midsummer Night’s Dream, and Henry IV. There are multiple language options, including Turkish, Korean, Spanish, and English.

Whether you’re an action movie fanatic, romance movie lover, Broadway enthusiast, or avid binge-watcher, there’s a streaming service to keep you company in the chaos.

Amid the COVID-19 outbreak, musicians all over the world, big and small, are continuing to release new singles, EPs, and even full albums — Childish Gambino is no exception.

On Sunday, Gambino released, 3.15.20 — an album consisting of 12 songs. Ten of the songs are titled after their timestamp location on the album. The two songs that are named differently are “Time,” a six-minute-long pop bop which features Ariana Grande, and “Algorhythm.”

From the moment I saw the completely white, blank album cover, the mystery behind the nothingness of 3.15.20 grabbed my attention immediately.

In this new album, Gambino explores a multitude of music types from the rap that he is known for, to R&B and electro music. He uses unusual forms of auto-tune, spoken word, and instrumentals, and yet every song is still astonishingly his own.

The first time I listened to this album was the morning it was released, when I made the mistake of playing it on shuffle. I had a sneaking suspicion that I should be listening to it in order, as some of the songs seemed to either end or begin oddly.

I then started from the beginning and listened in order, and I found that my suspicions were correct. The entire album, when played in order, makes up a single, 58 minute-long song. The end of each song is the beginning of the next.

3.15.20 is by far my favorite Childish Gambino album, due to the wide spectrum of music types and the concept-album format.

I appreciate Donald Glover, the name behind Childish Gambino, as well as other artists who continue to provide their fans with unique entertainment that pushes boundaries, even throughout this trying time.