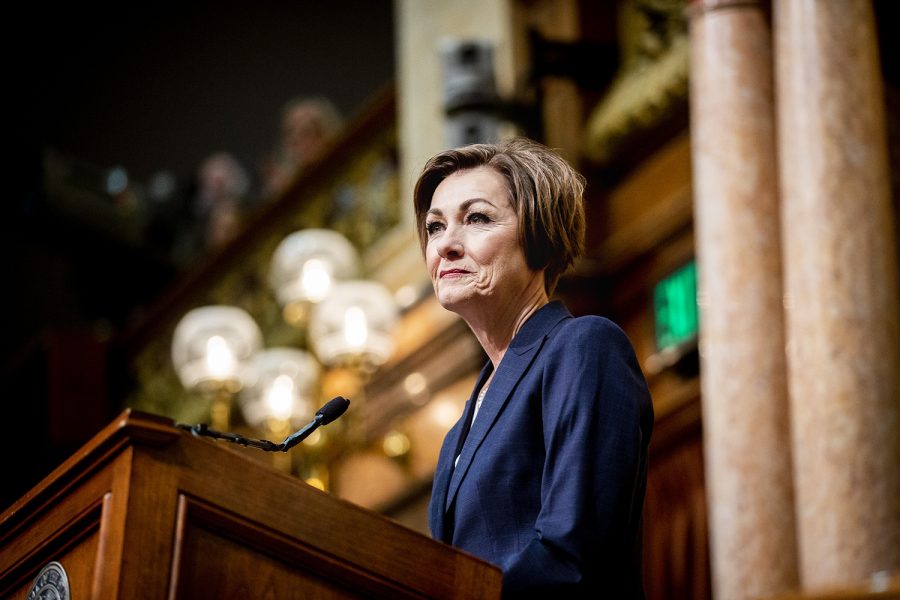 Gov. Kim Reynolds gives the Condition of the State address at the Iowa State Capitol on Tuesday, January 14, 2020.

In a press conference Monday, Gov. Kim Reynolds announced updates to testing, K-12 schools, and unemployment coverage after confirming Iowa’s 23rd case of the coronavirus, a resident in Dallas County.

The spread of the novel coronavirus has hit industries in Iowa and nationwide hard as stock markets tumble and national health officials urge Americans to stay home when possible.

Earlier in the day, Iowa Workforce Development announced Iowa would help cover unemployment claims for those who were laid off because of COVID-19. Claims that are filed and identified as a direct or indirect result of COVID-19, will not be charged to employers, according to a Monday afternoon press release. Fact-finding interviews for these claims will be waived and not be held although employers will be notified of claims received. The Iowa Workforce Development will process unemployment insurance payments.

Those that meet the criteria are those laid off due to COVID-19 or staying home to self-isolate, care for family members or due to illness related to COVID-19. The person applying for unemployment benefits must also have worked for an employer for at least six of the last 18 months and have earned at least $2,500 in the same time period.

The governor also said the State Hygienic Lab, a lab located in Iowa City that has been conducting the bulk of the coronavirus testing in Iowa, will add a second shift to pump out more tests more quickly. Daily capacity will ramp up from 54 to 108 tests per day, Reynolds said. She added that health officials are prepared to add a third shift if the situation warrants.

In an email to University of Iowa Hospitals and Clinics staff, UIHC CEO Suresh Gunasekaran said clinicians no longer needed permission from the Iowa Department of Public Health or the Program of Hospital Epidemiology to request a test from the State Hygienic Laboratory. But, because of limited availability of test kits, the laboratory was only testing those with the highest likelihood of COVID-19 or required hospital care.

She also said that national labs are beginning conduct tests from Iowa, and that positive test results would be included online. Reynolds said the state was placing orders for respirators and other health equipment to private vendors and at the Strategic National Stockpile.

In Des Moines, a hospital official offered a grim outlook for medical supplies for his facility. Chief Medical Officer at Broadlawns Medical Center in Des Moines Yogesh Shah said “We do not have enough of supplies,” to address the coronavirus, according to the Des Moines Register.

Over the weekend, Reynolds ordered the closure of K-12 schools in Iowa for at least a month due to evidence of “substantial community spread,” of the coronavirus in Iowa, which means there are cases of the virus where the origin of the infection is unknown.

She said she would work with legislative leaders to pass a measure that would waive the time requirement for K-12 schools. Schools in Iowa are required to complete 180 days or 1,080 hours of instruction per academic year, and a month-long school closure would derail those planned school years.

Although other states have ordered the closure of restaurants and bars, Reynolds said she was not yet recommending business closures, though she urged at-risk Iowans and those who aren’t feeling well to stay home and avoid large crowds and public areas.

Earlier Monday, President Trump called for strict nationwide guidelines to curb the spread of the virus. He recommended to avoid gatherings of more than 10 people.

In a press release from the City of Iowa City, officials applauded businesses who decided to alter their plans to mitigate the spread of the virus. Home to the University of Iowa, businesses in Iowa City already see a depletion in business during spring break and other holidays when less students are around. The UI’s spring break is scheduled to end March 23, but classes will be conducted online for at least two weeks after spring break.

“We applaud the local businesses that have decided to close, limit hours, or shift to delivery and pickup models ahead of the holiday. Though a difficult decision for business owners, we urge others to do the same,” the release stated.

Reynolds urged Iowans to take precautions with their health, calling for those with even mild symptoms of a cold or flu to stay home and avoid public places.

“I’m calling upon each and every Iowan to be an active part of our statewide mitigation strategy,” Reynolds said. “You really can make a difference. Now is a time to mitigate and slow the spread of the virus in our state, but it takes all of us to work together to make that happen.”