As students prepare to leave campus for the next three weeks for spring break and virtual-learning courses until at least April 3, local businesses are preparing for the impact this and the ongoing spread of coronavirus may have. 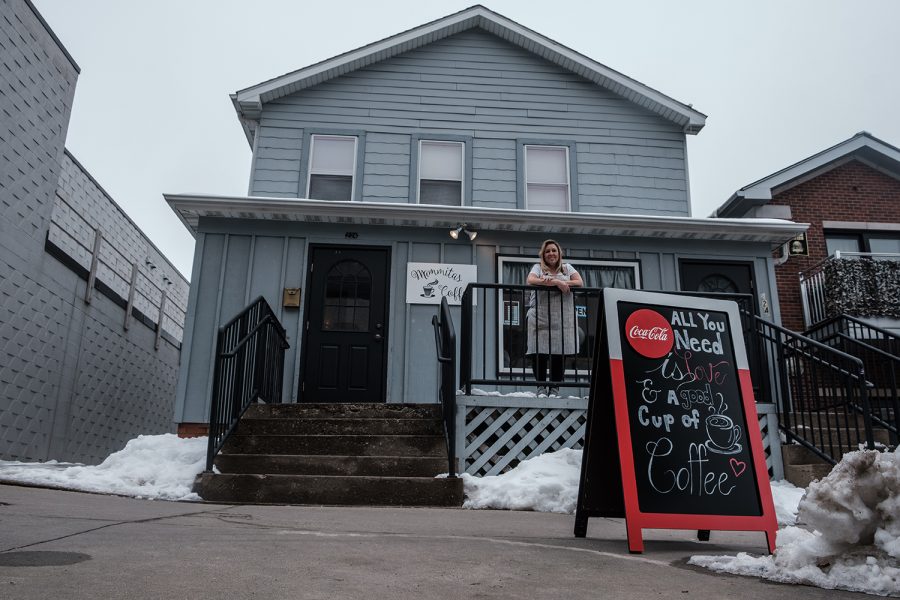 Mammitas Coffee Owner Jacquie Milian poses for a portrait outside of her shop in Iowa City on Thursday, January 30, 2020. Mammitas Coffee will have a grand opening event on January 31 from 5-8 p.m. Attendees can purchase a flight of five different beverages for five dollars.

From open to close a steady stream of people stopped in to buy drinks and pastries at Iowa City’s Mammitas Coffee on Thursday, emptying the pastry case by midday.

Owner Jacqueline Milian was on her feet making coffee and smoothies by herself for most of the day, until one of her employees arrived to help take orders from customers.

But, Thursday was supposed to be more than business-as-usual — Mammitas was set to cater refreshments for the Lamplight show with SCOPE Thursday night. The group canceled the event Wednesday due to rising concern about the spread of novel coronavirus, as universities across the country announced they’d be shuttering campuses. Milian, however, said she’d already purchased all of the supplies she needed.

After the cancellation, SCOPE member, Vivian Le, sent out a message on Twitter telling University of Iowa students and the Iowa City community to stop by the coffee shop and support the business. Community members joined in to post it on their own social-media accounts and spread the word, telling people to go to the coffee shop.

“When I came in today, I was so nervous … and I was like, ‘Wow this coronavirus thing — and everybody that’s leaving and hearing about how they’re shutting down the UI,’ I was like, ‘This is not going to be good for business,’” Milian said.

The University of Iowa announced Wednesday that classes will be taught virtually for at least two weeks after spring break, until at least April 3, amid concern about the spread of COVID-19. Students will be allowed to return to residence halls and any permanent off-campus residences as classes move to an online format.

Mammitas opened in January, and Milian said she only anticipated one slow week while students would be away for the spring recess — not three.

UI of Business Analytics professor Jennifer Blackhurst said the economic effects of coronavirus will be seen on supply chains all over the world. Even if a company in the U.S. does not have a direct supplier in China, she said one of its suppliers could import goods from China which could cause a delay in expected shipments.

“Companies also are planning for this as much as they can, so they’ll have business continuity plans, they’ll be looking at where the inventory is, they’ll be deciding on the best way to serve their customers,” Blackhurst said.

This is not the first time industries have faced epidemics and similar disasters, Blackhurst said, so companies should have plans in place for something like this.

President and CEO of the Iowa City Area Business Partnership Kim Casko said the organization has advised local businesses to follow guidelines from the Centers for Disease Control and Prevention and the Iowa Department of Public Health.

Related: UI residence halls and dining operations will remain while classes move online because of coronavirus

“I would be concerned about some of the smaller businesses, like the retail shops [and] the restaurants in terms of just decreased foot traffic during this time,” Casko said.

The UI’s decision to move to online classes will have a ripple effect on businesses large and small in Iowa City, she said.

The Iowa Department of Public Health hasn’t issued recommendations for Iowa businesses to shutter. The department does advise businesses to actively encourage employees to stay home when they feel sick, monitor worker traveling and follow travel guidelines from the CDC, and disinfect frequently touched areas of the workplace, such as countertops and doorknobs.

Although Milian is uncertain what the next few weeks will hold for her business, she said she is hopeful after the way customers turned out Thursday.

“It just gives me hope for the future, because the coronavirus may be here now but it’s not going to be here forever,” she said. “We’re going to get through this as a people — as a community — and it just gives me so much love.”