Athletes of every age have stepped up for Iowa softball this season, and that has translated to a great deal of success on the field early in 2020. 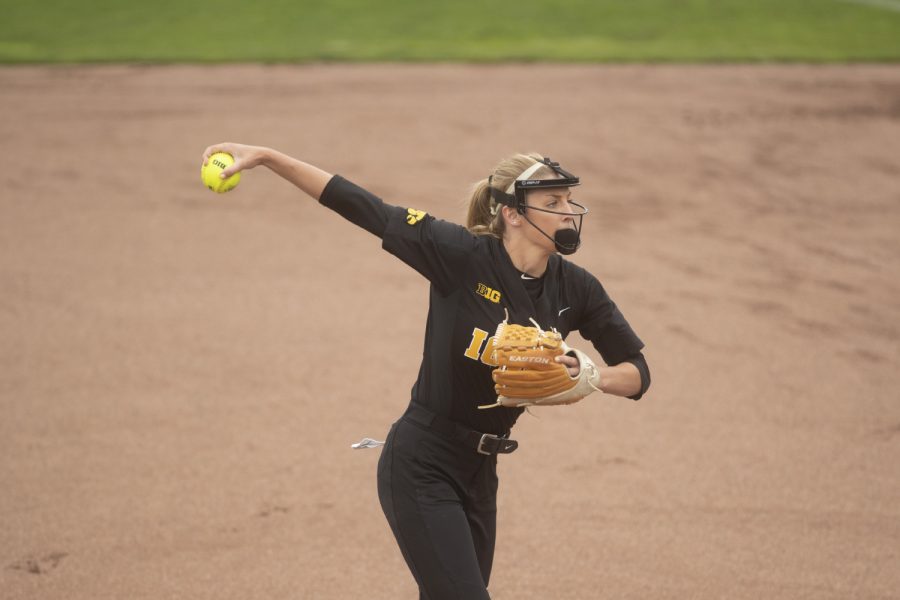 Iowa pitcher Allison Doocy winds up for a pitch at the Iowa softball game against Indian Hills at Pearl Field on Sunday, October 6th, 2019. The Hawkeyes defeated the Warriors 21-2.

Iowa softball’s roster features six seniors, and that has allowed room for younger players to step up and become an important part of the locker room dynamic.

After some roster turnover, there were plenty of fresh faces joining the Hawkeyes for the 2020 season. Five freshmen and several other transfers have just recently joined the team.

The seniors and other leaders got the fresh faces acclimated quickly.

“Whenever they first came in, you want to be available to all of them and help them whenever they’re struggling,” senior Havyn Monteer said. “The people that were on the team last year really just want to help them get through their rough times and tell them what they’ve done to overcome these problems and stuff.”

There were plenty of natural challenges for the newcomers, especially since many of them traveled long distances to come to Iowa. Freshmen Nia Carter and Kalena Burns are both from California, but they have felt right at home thanks to the senior class.

“They’re very welcoming and open to hearing your opinion, so it doesn’t matter if you’re a freshman,” Carter said.

Carter and Burns have already excelled for Iowa, earning Big Ten Player of the Week honors this spring. The pair also leads the team in hitting, batting over .400 apiece.

Burns slugging ability has also been evident this year, slugging .694. She has hit five home runs and batted in 20 runs.

Carter is efficient at the plate, too. She has only struck out four times in 55 at-bats.

Players contribute in different ways for Hawkeye softball. Some players are more vocal, while others like to lead by example.

“I think a lot of the previous lettermen step up but even the new girls like Kit and Boogey have really been the vocal ones,”  Monteer said.

Through the whole experience, Carter looks up to Aralee Bogar as one of the strongest leaders of the team. The freshman also has related to her closely as the season has gone along.

“I remember watching her last year, and she was a leader on the team as a sophomore and coming in. I wanted to be like that and make an impact on the team,” she said.

The impressive run the team has gone on to start the season is a testament to its quality leadership.

The Hawkeyes sit at 17-5 overall with just one tournament to go until Big Ten play begins.

It is apparent that the Hawkeyes have a great deal of trust in each other. As a result, each player has been able to shine and play up to their full potential, no matter what their role in the team is.

“There’s been leadership throughout. Like I said, all grades have some leaders in them,” senior pitcher Allison Doocy said. “Everyone’s working hard. Everyone’s doing what they need to do and we all have confidence in each other.”

The team will compete in Tampa Bay, Florida, this weekend before opening Big Ten Conference play against Maryland next week in Iowa City at Bob Pearl Softball Field.