As multiple bills move through the legislature to change Iowa's medical marijuana laws, patients are grappling with the effects of the program. 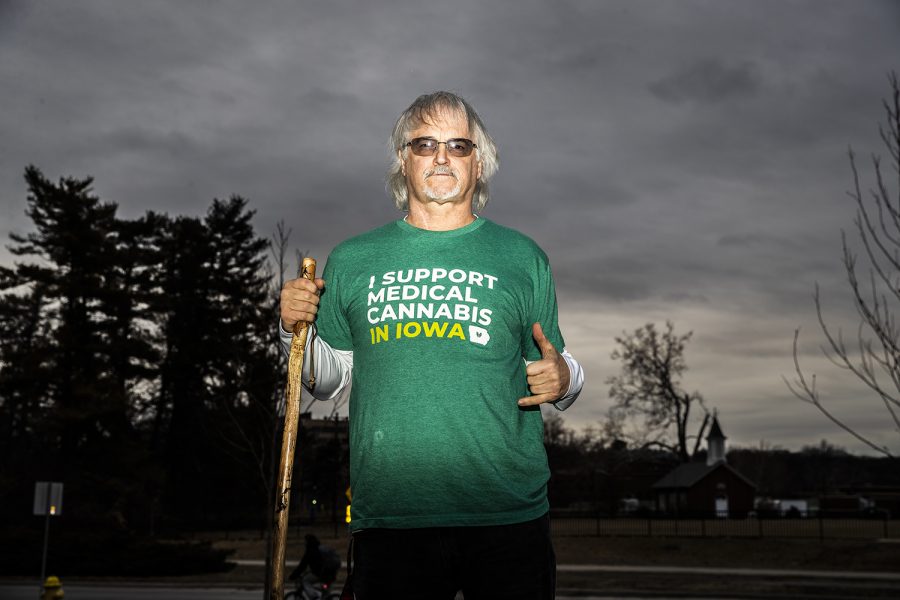 When he first joined Iowa’s medical marijuana program, 61-year-old Navy veteran John Fenner tried to treat the nerve damage in his left leg with the most potent THC product he could obtain. But the product wasn’t effective, he said.

Iowa’s medical cannabidiol program, which began in December 2018, allows patients with certain conditions to be certified for medical products containing up to 3 percent THC—the main chemical in cannabis that causes the “high” and helps with some conditions like chronic pain.

Fenner took home the strongest product available from a dispensary in Davenport, a $78 tincture bottle that was one part cannabidiol, or CBD, and 20 parts THC, but THC still made up only 3 percent of the overall formula. He had to take so much of it to relieve his pain, he said, that the bottle was empty in three days.

Many patients in Iowa who live with chronic pain face the same battle as Fenner, and a change in the regulation of how the system works could further limit access for patients.

Iowa’s Medical Cannabidiol Board recommends removing the 3 percent strength cap and instead setting a limit of 4.5 grams of THC over 90 days. Set in April 2019, the board’s proposal would allow stronger products to be sold in dispensaries but limit how much patients could buy.

The board’s recommendation comes from reviews of limited medical studies, said Owen Parker, project manager at the Office of Medical Cannabidiol. He said he couldn’t point to any specific studies the board used to inform their decision, but stressed that there are few robust, randomized control trials regarding medical cannabis the board could review.

“They really defer to the medical literature, and one of the things that again is missing is there’s really no randomized control, those types of FDA caliber studies, around actual dosing,” he said. “So that’s where that number comes from is what the literature currently says…And until there’s evidence that shows that some of those higher dosages are indicated for these conditions, they’re not likely to move.”

Between the last two meetings of the board in November and February, four patients, including Fenner, attended to advocate for a higher purchase limit during public comment periods according to minutes from the meetings.

Fenner has been dealing with chronic pain since he was injured in 2012 while working at a company called InSinkErator in Racine, Wisconsin. The injury left him with four herniated disks in his neck and permanent nerve damage in his left leg.

On his first visit to a dispensary in Iowa, Fenner was convinced he was in the wrong place.

“I could not believe what was there, that had to be a fake store,” he said.

The Ottumwa resident had been to two doctors attempting to get certified for Iowa’s medical cannabidiol program after a first doctor denied him because he didn’t believe in medical marijuana, Fenner said.

Having visited medical dispensaries in Florida and Illinois, Fenner said those locations were stocked with cannabis flower, gummies, oils, vapes and creams of varying strengths. He was expecting something similar in Iowa, but instead found a limited range of products at doses too low to be effective.

Dispensaries in Iowa sell capsules, tinctures, topical creams, and vapor products produced by MedPharm Iowa. The vapor products are available for the lowest-THC formula only.

From 2012 to 2017, Fenner was prescribed opioids to manage his pain, but even with the medication, his leg was barely usable and he needed a walker to get around. He went off opioids in 2017, in part because he didn’t like the effects they had on his mental state, which left him feeling groggy.

Instead, Fenner had a spinal pump inserted that used Prialt, a cone-snail venom that paralyzes the damaged nerves and allows him to use his leg, but a significant amount of pain remained.

So, Fenner turned to using marijuana illegally to manage the pain. Not wanting to continue breaking the law but desperate for a solution to his pain, Fenner joined Iowa’s medical program in October 2019. He was disappointed with the options available to him at dispensaries.

Chronic pain is the most common condition of people on Iowa’s medical program. But for people like Fenner with severe pain, the low potency of Iowa’s medical cannabis products is sometimes not enough, said Mary Clifton, a New York City-based doctor who conducts telemedicine for patients in Iowa.

After making a few more visits to dispensaries in Davenport and Des Moines, Fenner stopped going, saying there was no sense in spending $78, with no insurance coverage, on a product that wasn’t effective.

A presentation by Parker at the Iowa Medical Cannabidiol Board’s Feb. 14 meeting showed that 68 percent of patients in the program hadn’t renewed their registration cards after expiring.

Fenner said he has transitioned to vaping products, which he obtains in Illinois, with a higher concentration of THC than what’s available to him inside the boundaries of Iowa’s medical program.

“I don’t want to do anything illegal,” he said. “…I try to follow the rules. I try to do everything the way you’re supposed to. But that’s what I told that board, ‘you’re forcing my hand. I’m not going back to opioids, your stuff doesn’t work, you’re not giving me much choice.’”
The Medical Cannabidiol Board
Iowa’s Medical Cannabidiol Board, a panel of health-care professionals and law enforcement officials appointed by Gov. Kim Reynolds, makes recommendations for how the medicinal marijuana program is run and which conditions are accepted for treatment.

The board’s recommendation includes provisions allowing doctors to waive the 4.5-gram purchasing cap if they determine that the limit is too low, and it allows the limit to be waived for terminally ill patients.

Last year, Reynolds vetoed a bill passed by state lawmakers that would have set a purchasing limit at 25 grams over 90 days, saying she wanted to follow the board’s recommendation of 4.5 grams.

According to Parker’s presentation, 132 patients in the program have purchased more than 4.5 grams over 90 days, with 96 percent of them using it for untreatable pain. The average THC purchased among those patients was 8.1 grams.

Fenner said he’d like to see the board populated with more diverse voices. The junior vice commander of the Disabled American Veterans chapter in Iowa, he said he’s concerned that there isn’t representation for veterans, especially considering the high number of veterans who deal with PTSD.

The Medical Cannabidiol Board recommended in November 2019 that PTSD be added to the list of qualifying conditions, but that decision was denied by the Iowa Board of Medicine.

“They’re making all kinds of decisions, no one’s representing our side,” Fenner said. “They’re making these board meetings and nobody’s there.”
State lawmakers divided on how to advance
Two bills in the Iowa Legislature would make changes to Iowa’s medical program, with major differences in their approach. Both bills would remove the 3-percent strength cap and instead set a limit on how much THC can be purchased over time.

Republicans in the House passed a bill Tuesday night, falling largely along party lines, which follows the board’s recommendation and sets the limit at 4.5 grams of THC over 90 days.

In the Senate, a bill introduced by Sen. Brad Zaun, R-Urbandale, would set the purchasing limit at 25 grams over 90 days, similar to the legislation passed last year. The bill has reported out of committee but hasn’t yet been brought up for vote. A second legislative funnel is approaching on March 20, and bills need to pass through at least one chamber of the legislature to remain viable past that date.

Sen. Joe Bolkcom, D-Iowa City, said he doesn’t think the House’s bill will pass in the Senate, where both Democrats and Republicans introduced bills at the 25-gram limit.

“It’s two steps backward,” Bolkcom said. “It will reduce the THC and the medicine that’s currently available to patients. It will force more Iowans to travel to Illinois to break the law to get the medical care they need. It’s not worth passing.”

However, Senate Majority Leader Jack Whitver, R-Ankeny, said he was open to compromising with the House on a bill, saying he would follow Reynolds’ lead for the decision. Reynolds said on Feb. 21 she was comfortable with legislation that followed the board’s recommendation.

“I’m committed to trying to get a bill passed to expand our program, committed to working with the governor to find a level that she seems comfortable with,” Whitver said.

Rep. Wes Breckenridge, D-Newton, who was on the subcommittee for the House bill, said he’d like to see the legislature find a compromise at a higher purchase limit.

“My hope is that we can have conversations with the House majority and see if we can’t come to a compromise between the Senate bill and the House bill,” he said. “We may not all get what we want, but we’ll get closer to what was passed in a bipartisan fashion, something that would be effective for those suffering.”
Doctors navigate medical marijuana program
Clifton, the doctor who does telemedicine in Iowa, also works in other states and said Iowa’s program is easy to navigate.

“I think Iowa is just a great state,” she said. “I’m excited to be able to do cards there. The card process is simple and straightforward and there’s not any excessive burden to the person getting the card or to the person filling out the paperwork.”

Dr. Sayed Shah, who practices integrative medicine in Davenport, said most of his patients have seen improvements after being certified for the program.

The biggest problem Shah said he saw in the program is the difficulty of access to doctors that will certify patients for the medical cannabidiol program.

Shah said dispensaries, which are the first source many people approach for information, are barred from pointing patients toward doctors that would certify them for the program. Many doctors are hesitant to recommend cannabis, he said, either because the doctor’s employer discourages it or because of a lack of knowledge about it.

Patients often need to call the Iowa Department of Public Health to get pointed in the right direction, he said.