Iowa men’s golf has been searching for ways to solidify its lineup since Matt Walker graduated in 2018-19. Junior Jake Rowe has stepped in and filled the hole left by Walker. 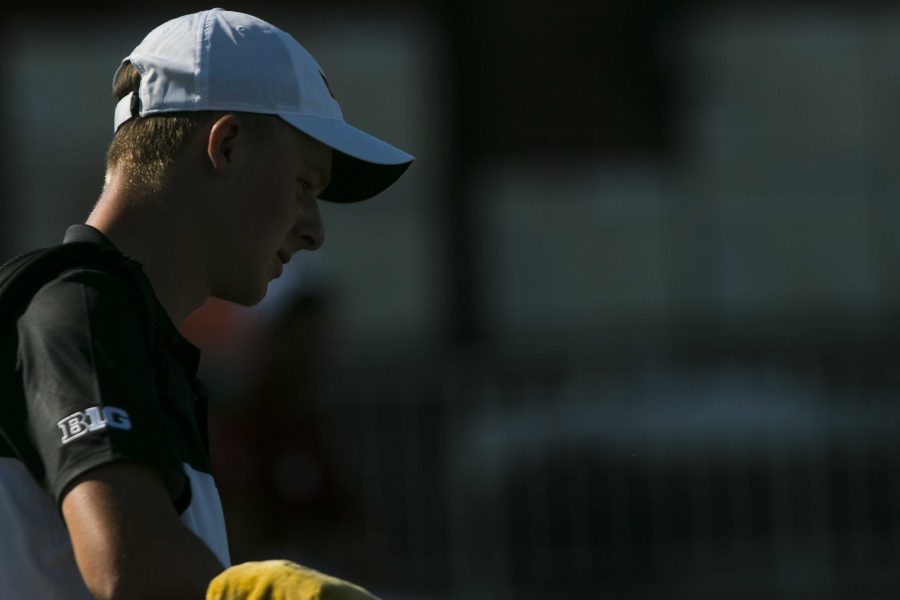 Iowa's Benton Weinberg walks towards the clubhouse during a tournament at the Donald Ross Course at the Cedar Rapids Country Club in Cedar Rapids on Tuesday, Sept. 19, 2017.

Finding an opportunity to play college golf is often not easy. Rosters are exclusive, typically made up of less than 10 golfers.

At Iowa, things are no different.

“I started [at Iowa] as a freshman, and I didn’t play on the team for a single tournament my freshman year,” senior Benton Weinberg said. “Ever since the second event [on the schedule] my sophomore year, I’ve played every event. It’s been nice the last couple years to travel every week, get really close to all the guys.”

Weinberg didn’t get his chance to play at Iowa just because he earned seniority with age. He had to play his way into a spot at Iowa, just like everybody else.

Head coach Tyler Stith and assistant coach Charlie Hoyle hold qualifying rounds at different times during the year. The six golfers on the team with the best stroke average across qualifying and competitive rounds are the ones that get to play tournaments.

Last year, Iowa’s six-man lineup was consistent. This has not been the case so far in 2019-20.

Iowa has had many faces enter and exit its lineup this season, including the likes of junior Jake Rowe and freshmen Matthew Garside, Mac McClear, and Garrett Tighe.

“We saw every single freshman play in the fall,” Schaake said. “I don’t think that really resonated well with Jake.”

Rowe responded well to the shake ups in the lineup. He began to play better golf, shooting a career low two-under-par 70.

“Just being around the guys, coming out here, there’s a whole lot of good players that we play with all the time,” Rowe said. “We go out, we challenge each other on the course. You’re in that type of environment where you’re always just going to get better. You’re working hard every day.

RELATED: Zeitler proving to be superstar for Iowa golf

Rowe’s success is not completely uncommon for a golfer that is trying to break into the six-man lineup. According to Weinberg, pressure impacts every golfer differently.

“Being safely in [the lineup] takes a little stress off in tournaments,” Weinberg said. “It kind of frees you up a little bit. It also is nice to be trying to crack the lineup, because everybody else is pushing you, and there’s constant competition with the other guys trying to get in the lineup, too. I guess it’s good on either side.”

The Hawkeyes’ next event will come in Naples, Florida, at the Calusa Cup beginning April 5, giving them some time to work out the kinks in their refurbished lineup.