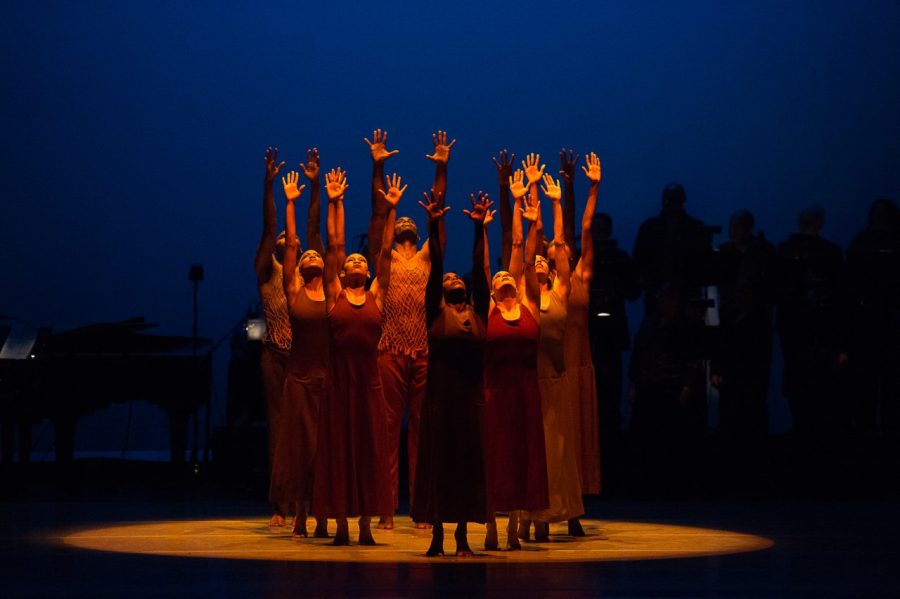 Bright lights will shine through the darkness of Hancher Auditorium’s Hadley Stage to show the clinically precise movements of the dancers of Alvin Ailey American Dance Company tonight. The group will make their way to the stage with performances of three different dances, BUSK, Ode, and Revelations.

Ronni Favors is an Iowa City native who serves as rehearsal director for the company. Favors originally began her training at the University of Iowa’s children’s dance program, where she was urged to pursue her dream of dancing.

Favors first saw the dance company herself at Hancher when she was in high school. Before the performance, she was set on becoming a ballerina. Although she did not want to go, her mother took her to Ailey’s performance, and afterwards, she found her worldview changed.

“[The Alvin Ailey American Dance Company] changed my outlook about the kind of dance I wanted to pursue and the kind of person I wanted to become: a real cosmopolitan citizen of the world,” Favors said. “I could see these dancers — I could see so much in them besides their obvious artistry.”

Favors ended up pursuing a more modern style of dance with the company. While Favors no longer dances, she still oversees the choreography and stays involved in rehearsals.

One of the pieces she oversees for the show is Ode by Jamar Roberts. Roberts’ piece deals with gun violence and splits the dancers into an all-women’s cast and an all-men’s cast for the performance.

“It’s an elegy and meditation on a beauty and the fragility of life,” Favors said. “We’re talking about love, about life, but obviously there’s so much going on right now, we’re really talking about how he’s choreographing his or her own way coming at the preciousness of life.”

Sarah Daley-Perdomo, a dancer in all three performances, said Ode has become one of her absolute favorite dances.

“From the time that we start in the beginning with me is a really interesting movement that can get overwhelming in the process because it’s just, it’s so much. But the way that [Roberts] does everything together and creates this world, I think, is just so wonderful,” Daley-Perdomo said.

Daley-Perdomo is from South Elgin, Illinois and, like Favors, had a career-changing first experience with Alvin Ailey’s company.

The Illinois native was taken to Chicago with her dance studio to see the company perform, and she said she immediately fell in love. The event became an annual excursion for her and her dance studio until she graduated high school and went to Ailey’s elite B.F.A. program.

Daley-Perdomo went from the B.F.A. program to the Ailey II group to the main company by 2011 and has been working with the Alvin Ailey American Dance Company ever since. She said her dance company forms a unique relationship with the audience.

“The more energy that we get from the audience, that fires us up,” Daley-Perdomo said. “I think that that’s a really beautiful relationship that I don’t know if all companies share.”

George De La Peña is a dance professor at the UI and starred in the film Nijinski. He said he believes the company is internationally well-known for a reason.

“The company is very exciting, and they’re going to be bringing very interesting work,” De La Peña said. “We are all very excited that they are coming.”