The two 165-pounders met up again in the conference finals and the matchup lived up to the hype. 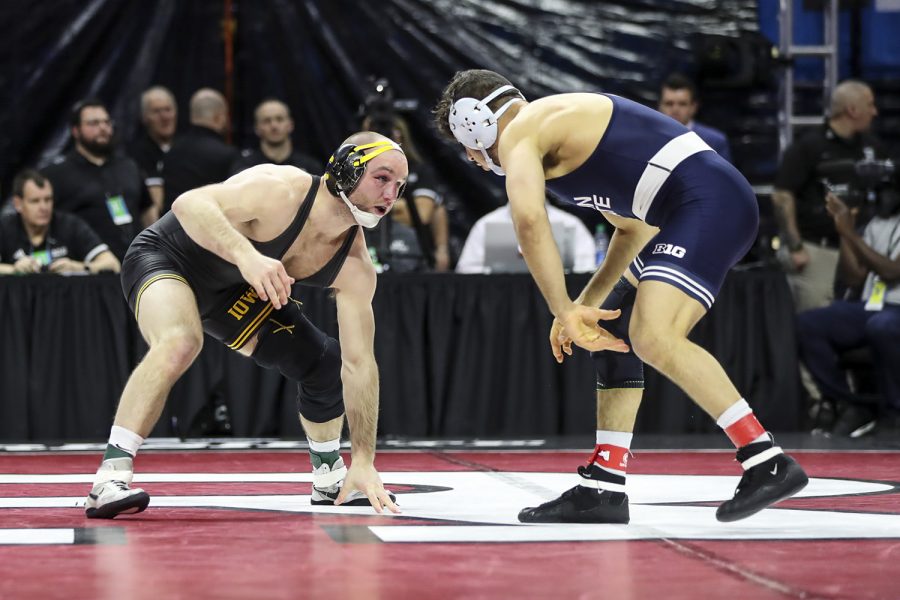 Marinelli secured a takedown with 15 seconds remaining in the third period to take the lead and secure his second consecutive Big Ten title. It is also the second year in a row Marinelli has defeated Penn State’s top-seeded Joseph in the finals.

“I love competing with that guy,” Marinelli said. “He’s very competitive and so am I, so it’s always fireworks every time we wrestle. I love it as a competitor.”

Marinelli and Joseph, a two-time NCAA Champion, have met two other times outside of the Big Ten Championships. In a 2018 dual, Marinelli upset his Penn State opponent with a 9-6 decision in Pennsylvania.

Earlier this season, Joseph handed Marinelli the first loss of his Carver-Hawkeye Arena career when the Nittany Lions and Hawkeyes met on Jan. 31.

Marinelli knew he was likely going to see Joseph again for a Big Ten title.

With the experience the two 165-pounders have with each other, it was tough for one of them to find an apparent advantage.

The two countered moves and most of the bout was tied at 1-1 until Marinelli’s takedown.

“[Marinelli] applied pressure the whole time,” Iowa head coach Tom Brands said. “There’s a lot of things there, it was hard wrestling and we didn’t hang. So when [Joseph] went into those positions, we’re not hanging. That’s why [Joseph] never really could get on our elbow where he could really cinch us. We don’t want to be dilly dallying it around in there.”

By a score of 3-2, Marinelli took down No. 1 seed Vincenzo Joseph to earn his second @B1GWrestling [email protected]_Wrestling | @FloWrestling

A fifth matchup between Marinelli and Vincenzo could be coming up at the NCAA Championships. They will likely be the top two seeds in the national tournament.

Marinelli could not carry the momentum from his Big Ten title into NCAAs last season. He finished seventh in the country after being upset in the quarterfinals. The junior is focused on making sure the results are different this time around.

After his upset over Joseph, Marinelli will likely be the top seed in the NCAA Championships.

Between now and then, Marinelli said he won’t be found on the golf course or enjoying the spring weather. He’ll be in the wrestling room looking to become the latest in a long line of national champion Hawkeyes.

“I haven’t gotten a national title yet, and ever since I was little I ended my wrestling season off with a state title,” Marinelli said. “I never lost the state tournament. Going through these last couple years, losing sucks. You can’t spend the summer the way you want to. It’s always in the back of your mind and for a real competitor, that haunts people.”