Both Hawkeyes earned gold at the 2020 Big Ten Wrestling Championships for the first time in their careers. 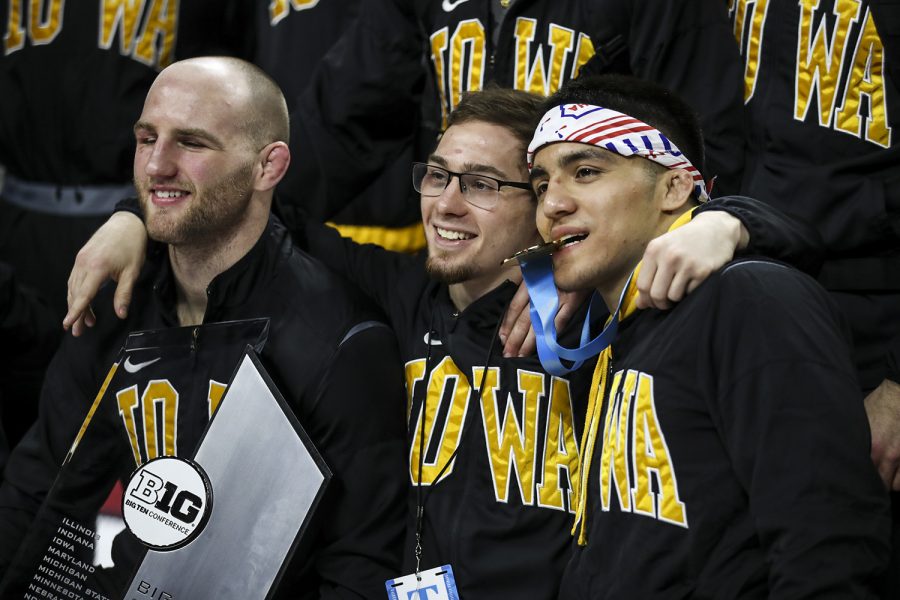 Iowa's 165-pound Alex Marinelli, 125-pound Spencer Lee, and 149-pound Pat Lugo smile for a photo after all three won their respective championships during the final session of the Big Ten Wrestling Tournament in Piscataway, N.J., on Sunday, March 8, 2020. Iowa won the team title with 157.5 points.

PISCATAWAY, N.J. – Spencer Lee had done a lot of things in his career, including winning two national championships, but he had not won a Big Ten title coming into this year’s conference tournament.

He quickly took care of that.

Lee bulldozed through his three matches at the 2020 Big Ten Wrestling Championships on his way to defeating Purdue’s Devin Schroder in the finals at 125 pounds via a 16-2 major decision. That wasn’t a good enough championship performance for Lee.

“It’s a conference tournament, so you’ve got to do what you’ve got to do,” Lee said. “I’ve just got to keep scoring points. I think there were a lot of slow moments in the match. Both of us just kind of working top and bottom. Probably pretty boring to watch. Maybe I’ve got to get back on my feet some more.”

That type of mindset has led Lee to an undefeated 2020 season and his first Big Ten title.

“I’ve talked all year long about Marinelli, Kemerer, and Lee,” Brands said. “They are leaders. This was maybe a milestone for [Lee] in his own head. He’s a competitive guy, make no mistake on that. It means something.”

The Homestead, Florida, native wrestled for two seasons at Edinboro in Pennsylvania before becoming a Hawkeye. That decision has developed Lugo into the wrestler he is today.

“Not to throw shade on other organizations, but this is the best organization I’ve ever been with since day one,” Lugo said. “It’s not just a wrestling team; it’s more of a family. If you want to be something more than yourself, more than just wrestling — if you’re a high-school wrestler you should text the coach you committed to and say, ‘Hey, man I’m going to Iowa.’”

Winning an individual B1G title and clinching a team title in the process: #JustPatLugoThings. 💪

Thanks to a first period takedown, @Hawks_Wrestling’s Pat Lugo is the @B1GWrestling champion at 149 [email protected] | @FloWrestling pic.twitter.com/MP1RqSa0Fx

Lugo met up with Ohio State’s top-seeded Sammy Sasso in the finals at 149. The bout was a rematch from earlier in the season, when Sasso handed Lugo his only loss of the year.

The match took place at Carver-Hawkeye Arena and went down to the wire. A late review went in Sasso’s favor, giving him the match. Lugo has been waiting for another shot at the Buckeye.

“I started thinking about that [first] match a week before,” Lugo said. “We had Nebraska, but [Assistant coach Ryan Morningstar] came up to me and said we had Sasso next. Since then, I’ve been thinking about him. He’s a good competitor, a good wrestler. He beat me the first time. It wasn’t over yet. I might see him again at nationals. I hope I do.”

Like the previous match, this championship bout went down to the end. Lugo defeated Sasso 2-1 after jumping out with a first-period takedown. Sasso nearly won the match at the last second with a takedown but it was not held up under review.

Lugo finished third at Big Tens a season ago. His jump up to first place is something he attributes to his Hawkeye teammates.

“I feel like I’m the best in the world,” Lugo said. “That’s how much my confidence has grown over the past year. Just being around guys like Spencer Lee, Alex Marinelli, Michael Kemerer — that winning is contagious. That confidence is contagious. It’s just like watching the flu. You hang around guys with the flu — you catch the flu. You hang around winners — you’re going to become a winner.”