After going 2-2 last weekend, the Hawkeyes are eyeing a sweep on the coast this time around. 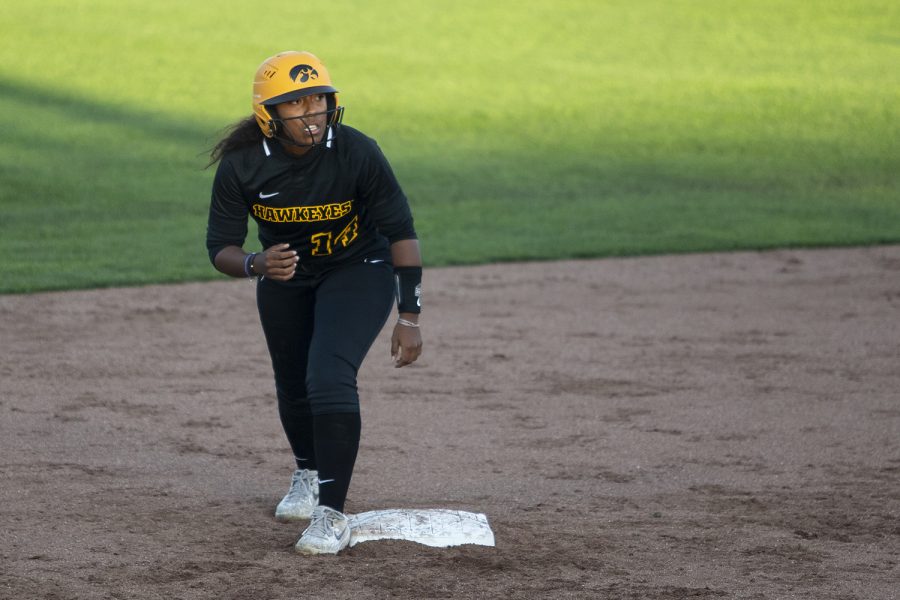 Infielder Nia Carter leads off the base during the Iowa softball fall opener against Des Moines Area Community College on Friday, Sept. 13, 2019. The Hawkeyes beat the Bears 4-1 in 10 innings.

After going 2-2 in Madeira Beach last weekend, Iowa softball will look to improve on the previous tally with four more games in the same spot this weekend.

The team faced adversity with some travel issues the previous week, including not getting much sleep before playing its series-opening game. However, it is something the team has overcome early this season.

“I think coming from this past weekend we’re going to be even stronger,” freshman Nia Carter said. “It was just a challenge, but we did really good and stepped up to it even if we took a couple of hard losses.”

With a lot of young and new players in the rotation and lineup, such tough experiences have helped the team grow and become closer. Although the team will have traveled five weekends in a row after this weekend, many of the players are enjoying the moments and are not ready for it to end just yet.

“It’s still enjoyable because we get to go as a team, and we make memories every time,” utility player Aralee Bogar said. “It can get long since it has been a month now, but we’re almost to our first home game, so we’re really looking forward to that.”

With the team going back down to play at the same location as last weekend, the familiarity will be a boost.

This week, the team will take on Loyola Chicago, South Dakota State, Ohio, and Central Michigan. The Ramblers look to be the biggest challenge out of the four teams, as the team sports an 11-5 record. The Hawkeyes have an early start against Loyola, which seemed to have an effect on the team last week.

Loyola has five players over .300 hitting so far this season, which could be a challenge for the pitchers. The team also has several batters with a slugging percentage over .500, but Iowa’s pitchers are confident in each other to get the job done like they have all season.

“Our pitching staff is confident in ourselves as well as each other, and we know that if we can’t get the job done someone else is going to come in and take over,” senior Allison Doocy said.

The team will be looking to continue its solid run of hitting with the likes of Carter and Bogar having huge weekends last time out. The key to the team’s success could be in getting runners home.

Although Iowa has been a solid hitting team so far this season, the team has struggled at times to get runs when they matter most.

The improvements the team has made this season has head coach Renee Gillispie confident in the group not only for this season, but for getting the program back on the map.

“Our biggest thing we’re trying to do is to show the softball world that we’re back on track, and we’re going to be able to compete against anybody,” Gillispie said.

Iowa starts the weekend against Loyola Chicago in another Friday game and two Saturday games.