Both the men's and women's teams have a full schedule of weekend competition. 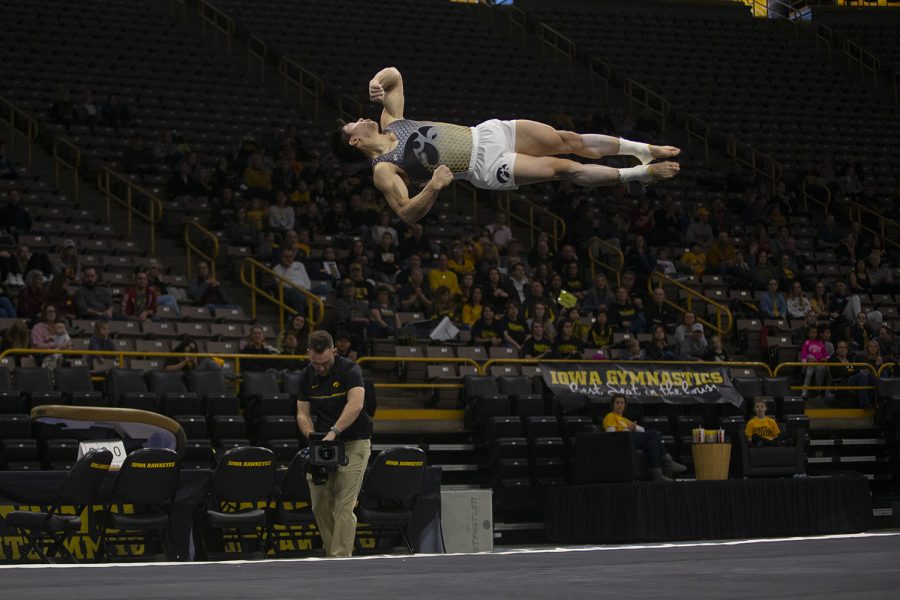 Iowa’s all-around Bennet Huang performs his floor routine during a gymnastics meet at Carver Hawkeye Arena against Minnesota and the University of Illinois at Chicago on Saturday, Feb. 1, 2020. The Hawkeyes won with a final team score of 400.00. Huang earned a score of 14.000.

Both the Iowa men’s and women’s gymnastics teams have a full weekend ahead, which includes facing off against a ranked Big Ten contender for the men and a double-header against an in-state rival and Big 12 competition for the women.

Coming off of an abnormal draw to Illinois, the No. 9 Iowa men’s team travels to Columbus this weekend to match up against No. 5 Ohio State. Northern Illinois will also be present, but it will compete at the collegiate club-level, as its varsity program was discontinued in the ‘90s.

Ohio State is 1-2 in dual matches this season, including an 0-2 record against Big Ten teams. The Buckeyes earned their first win of the season against Navy and tallied their highest team score of the season, 408.900. The Buckeyes are led by junior Sean Neighbarger, whose career high on vault is 14.750, as well as sophomore Jesse Tyndall, who performed a perfect 15.000 routine on floor against Michigan on Feb. 2.

After a week off, the No. 27 Iowa women’s team continue its annual Iowa Corn CyHawk Series against Iowa State on Friday, traveling to Ames. The Cyclones are ranked No. 17 nationally and have won their last four contests, putting them at 8-6 for the 2019-20 season. Junior Natalia Ros Vaquer leads the Cyclones to a No. 12 rank on the uneven bars, earning a season-high with 9.950.

The tight race between the two in-state rivals last season resulted in a 196.275-196.250 loss for the Hawkeyes in Iowa City, yet multiple season and career bests took place during that competition for Iowa.

After Iowa State, the GymHawks stay at home March 8 and host the Big 12’s West Virginia in Carver-Hawkeye Arena in the afternoon. The No. 31 Mountaineers are ranked 26th on floor, averaging 49.047 on the event as a team and tallying individual 9.900s over this season.

West Virginia won its last match up against Rutgers last week with a team 196.425 — its best of the season — and completing a winning season thus far with an 11-7 record. The Mountaineers are led by senior Chloe Cluchey on floor (9.925) and sophomore Esperanza Abarca on beam and bars (9.900).

Iowa’s last competition was at the Big Five Meet, hosted by the Big Ten Conference in Toledo, Ohio, which resulted in a disappointing fourth place finish on day one. The Hawkeyes completed a team 195.725, with outstanding performances by Lauren Guerin on floor (9.875) and Bridget Killian on beam and vault (9.800 and 9.875).

Next week, the women host Western Michigan for Senior Night March 13, while the men host No. 2 Michigan at home in Carver-Hawkeye Arena on March 15.