The Iowa House of Representatives passed a bill Tuesday evening to ensure medical amnesty to Iowans. After University of Iowa Students fought for this bill over the last five years, it will now move to the senate. 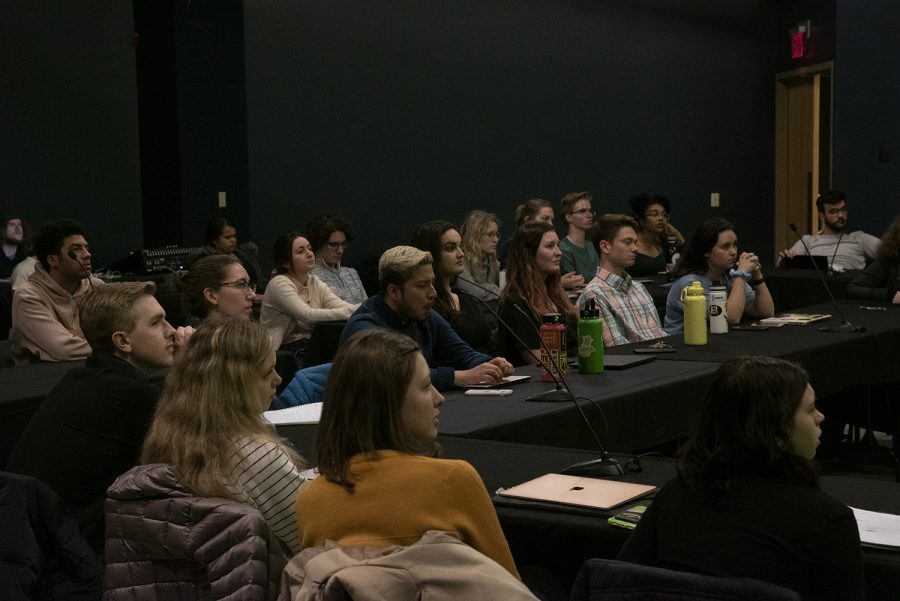 UISG meets in the Blackbox Theater in the Iowa Memorial Union on Tuesday, March 3rd, 2020. UISG is going to Des Moines on Wednesday to advocate for the UI, specifically through medical amnesty (a law that allows students who are underage to call an ambulance and not be persecuted for the well underage drinking stuff) and renting issues.

A University of Iowa Student Government-backed bill in the Iowa Legislature that would grant under-aged intoxicated individuals amnesty when seeking medical assistance in alcohol-related emergencies cleared the Iowa House Tuesday.

Student-government leaders have pushed lawmakers to pass these protections for the last five years, but Tuesday marked the first time the bill came to a full chamber vote.

House File 684 passed Tuesday on a 95-3 vote, sending the bill to the Iowa Senate, where the bill must pass before it can be signed into law. Clearing a legislative chamber was a goal that University of Iowa Student Government Director of Governmental Relations Connor Wooff had in his mind since he first began in UISG.

Wooff has been personally involved in this initiative since last academic year, when he began his tenure as the director of governmental relations. He said that the House’s vote marked a monumental moment for the legislation that Iowa State University, the University of Northern Iowa, and the UI fought for.

“I’m very excited about [this vote],” Wooff said. “The House was the biggest hurdle. That’s where similar bills have died before. It’s never been brought to a full vote. Today was a big deal.”

Wooff and other UISG representatives will travel back to the capitol today to urge state senators to support the bill.

Sen. Zach Wahls, D-Coralville, helped the student organization this year, Wooff said, and actively voices his support for the bill. The UI alum said in a Jan. 22 interview that when UISG leaders reached out to him, he knew that passing a medical amnesty law was important to protect students on campus and in the state of Iowa.

“Medical amnesty is a concern because there are underclassmen who can find themselves in a position where they have to choose between doing the right thing medically and protecting themselves legally,” Wahls said. “I don’t think that we ever want to put anyone in that situation. We want to make sure the law reflects that. If someone needs help, they should get help, period.”

Wahls said that UISG helped him understand the priorities of the students whom he serves. He said he’s always willing to hear from students about their concerns while on the UI campus.

Wooff said this policy currently exists in 39 other states, including Minnesota, Kansas, and Wisconsin. He said that of the 19 percent of underaged people who find themselves in an alcohol-related emergency without a law protecting them, only four percent will call. A 2006 Cornell University study found that after introducing medical amnesty policies there was a 22 percent increase in calls for medical assistance.

“We’ve learned [through research] that this is a very effective law,” he said. “When I first became director and a new legislature began, this was a clear agenda item that we needed to fight for. This law will save lives. Iowa is the only state in the Midwest without a [medical amnesty] law. It’s bipartisan and it’s very clear that this law works.”

Wooff said that as a resident assistant, he has seen students who could have benefitted from a medical amnesty law and he isn’t alone.

UISG Deputy Director of Governmental Relations Conrad Beech said that he has seen the UI’s Responsible Action Protocol, a similar policy to medical amnesty that ensures the university won’t punish under-age students in emergencies, in action. He said he knows that this potential law could be effective if passed.

“It’s exciting to finally have [the bill] out of the house,” he said. “I’ve been in situations where the university’s [Responsible Action Protocol] has saved people’s lives. I think this [fight] is really important and hopefully we will have it as a law soon.”