University of Iowa officials said Wednesday any change in delivery method of instruction would occur in coordination with public entities. They emphasized they're confident risk is low in Iowa. 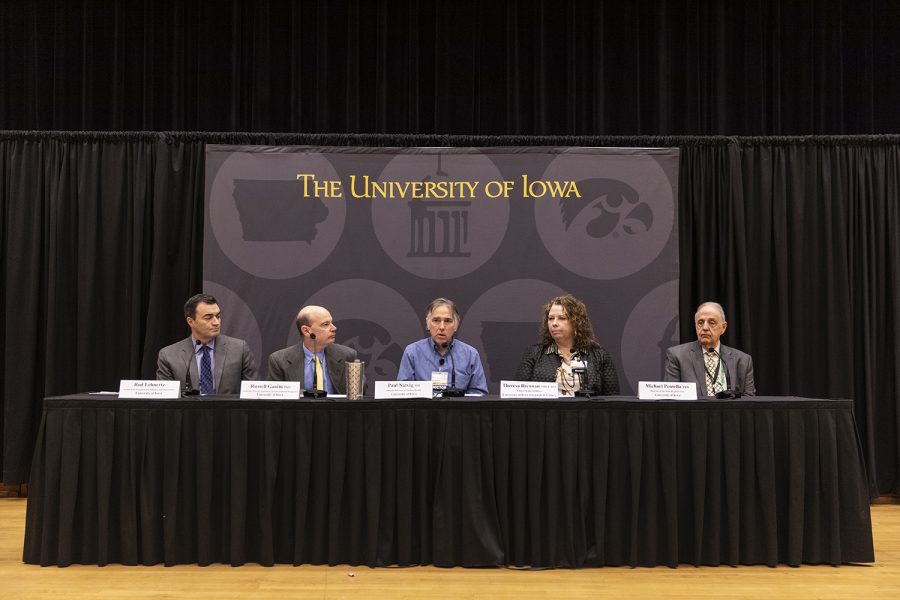 University of Iowa officials speak during a media availability event at the IMU on March 4, 2020. The university officials spoke to reporters about the UI's actions regarding coronavirus.

An email sent to Tippie College of Business students from an associate dean on Monday said instructors are preparing for novel coronavirus in Iowa City and would possibly cancel some class meetings to prevent further spread, though University of Iowa officials on Wednesday said they’re confident the state’s risk for the virus remains low.

Asked whether moving classes to an online format and widely shutting down regular course operations was a possibility in the event of a widespread coronavirus outbreak, UI Senior Vice President for Finance and Operations Rod Lehnertz told The Daily Iowan Wednesday morning the UI will continue to monitor the evolution of this matter with federal and state agencies.

“We would never do it in a vacuum,” he said. “We have state, federal, Board of Regents, gubernatorial connections that we will have before any of those kinds of changes in our standard practice for teaching our students, for conducting the business of the university. We will not do that on our own and in a vacuum. It will be based on what we learn from the [Centers for Disease Control and Prevention], the Iowa Department of Public Health, and our coordination with the state, with federal agencies, our Governor’s Office, and the Board of Regents.”

His remarks follow a message Tippie Associate Dean Ken Brown sent to business students Monday saying, “Instructors and [advisers] are preparing for the possibility that we will see the virus here in Iowa City and, as a way to prevent further spread, cancel some class meetings and appointments. Now is a good time to ensure that you have access to remote collaboration tools such as OneDrive and Zoom web-conferencing software. Should the need arise, your professors and [advisers] will let you know what software will be used to continue with meetings and other learning activities.”

The DI sought clarification from the UI on whether the guidance provided in Brown’s message stemmed from the UI administration or team coordinating the response to coronavirus, or whether these are Tippie’s plans. UI Assistant Vice President for External Relations Jeneane Beck wrote in an email that “the university is in the process reviewing continuity plans and ensuring we have the support mechanisms in place, in the event we need to make changes to how we operate or how we teach.”

Lehnertz on Wednesday shared with reporters during a media-availability session that the UI is following the campus’ critical-incident management plan to cooperate with public entities that manage disaster control to continuously plan and minimize risk from such incidents.

The UI has canceled its Japan study-abroad programs after suspending programs to countries affected by the coronavirus, including Italy, China, and South Korea, International Programs Dean Russ Ganim said Wednesday.

UI International Programs on Sunday shared it canceled the UI-based CIMBA Italy program and other affiliated programs in the country. The university suspended the China and South Korea programs in February.

Ganim said the Japan cancellation affects five UI students. Three hadn’t left yet as the academic calendar there differs from the U.S. One UI student from China scheduled to study in Japan is still in Beijing, he said, and one UI student is in Japan on a yearlong program.

He said providers understand the reasons for canceling the programs and the UI has communicated with students whose programs were canceled about their options in regard to earning academic credit.

“In order to ensure the health and safety of our students … we have had to cancel some programs,” Ganim said. “We continue to monitor the situation, because at this point … most of our students now are in are in countries where the conditions are stable.”

Ganim said most students whose programs were suspended were not returning to Iowa City and instead went back to their homes.

The Iowa Department of Public Health advises anyone returning from at-risk countries to self-isolate for 14 days by staying home to monitor symptoms.

Interim UI Student Health Director Paul Natvig said most students on these study-abroad programs did not live in the residence halls, but added the UI would accommodate students if needed.

“If a situation arose where a student had no place to go, we would make arrangements,” he said. “Keep in mind, this would be somebody without symptoms.”

Cambus management has worked with the UI Parking & Transportation Department on pandemic planning in case of a coronavirus outbreak, according to an email sent Tuesday to employees.

“All functions of the department have been evaluated to determine if they are critical, important, or not critical to continue in the event of an outbreak,” said the email, which was signed by Cambus Manager Brian McClatchey and Cambus Operations Manager Mia Brunelli.

Because Cambus provides support to the UI Hospitals and Clinics, its services have been deemed critical to maintain in the event of an outbreak, they wrote.

“Should there be adjustments to university classes or services (such as suspending classes in an outbreak), Cambus will continue to operate,” they wrote. “However, operations, routes, and schedules would likely be reduced and altered to support the needs of UIHC. Those who are not sick will be expected to report to work as scheduled, unless otherwise notified by Cambus management.”