Another electric vehicle charging station located at the Court Street Transportation Center in Iowa City joins a fleet of stations that are adding to the city’s Climate Action Plan through a reduction in greenhouse-gas emissions. 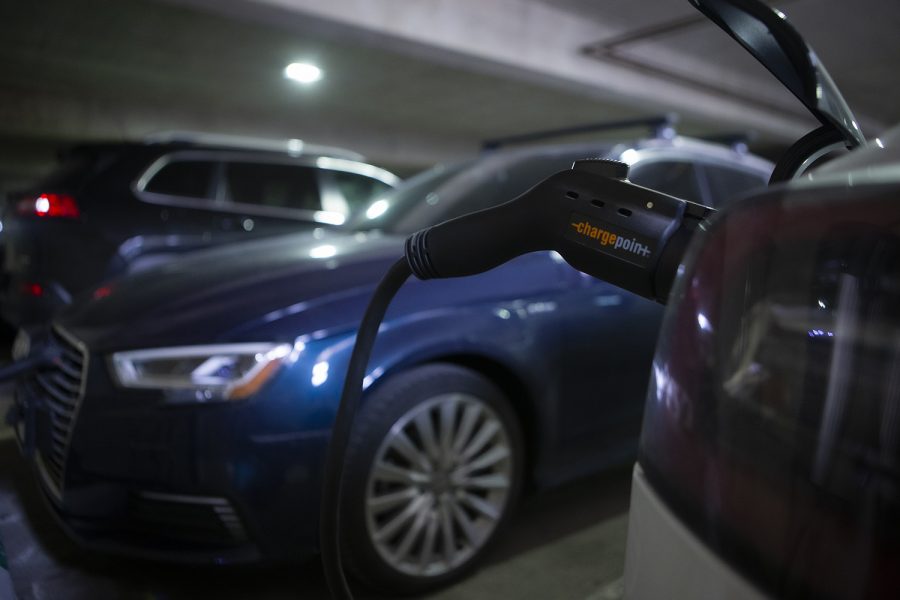 Two cars recharge at the station in the Court Street Transportation Center on Monday, February 24, 2020. The new stations recharge electric vehicles for a maximum of four hours.

An electric-vehicle charging station is now open for use at the Court Street Transportation Center in Iowa City. The station opened to address the needs of energy-saving drivers, as well as to reduce the city’s greenhouse-gas emissions.

Iowa City Associate Director of Transportation Services Mark Rummel said introducing these stations will prepare Iowa City for future increases in the use of electric vehicles. The city started implementing these stations in 2017 to increase energy-saving car usage and to get a better idea of how many drivers actually use them.

Other electric-vehicle charging stations in Iowa City are located on Capital Street, Dubuque Street, in the Chauncey Swan garage on Gilbert Street, and at the Harrison Street Ramp. There is also a plan to open a future charging location at the Tower Place parking ramp on South Gilbert Street, he said.

“We are monitoring the current demand on units. We do have plans to install another dual set here at Tower Place,” Rummel said. “The city will have stations at all of our parking ramps at the point.”

Iowa City Operations Supervisor Daniel Bissel said the reduction in greenhouse gases by the charging stations complement the city’s Climate Action Plan and sustainability goals. In 2018, the electric-vehicle charging stations averaged 3.5 tons of greenhouse-gas emissions, and in 2019 that number grew to 12.5 tons, he said.

“City council has made it a priority to elect a Climate Action Plan, and one of those goals is to encourage us drivers to switch to electric vehicles, so this definitely works towards that goal,” Bissel said.

Iowa City Sustainability Coordinator Brenda Nations said these numbers indicate the gradual offsetting of emissions they want to continue into the future.

“In our climate action plan, we have identified that transportation is one of the categories we are looking at to reduce our emissions, and so electric vehicles really help with that,” she said.

The number of electric-vehicle drivers is a small percentage as of now, Nations said. However, the city anticipates electric vehicles to become more prevalent in the next 10 years, so she said these stations are a proactive way to prepare.

“It is a part of the bigger infrastructure we are looking for,” she said.

Data collected by the city’s parking and transportation indicate an increase in drivers over the last few years, Bissel said. From 2018 to 2019, the number of drivers with electric vehicles grew by 114 in Iowa City. The use of the charging stations also followed that growth, he said.

Rummel said the city does have a budget for future expansion, but officials are monitoring numbers to determine what will be best for the future.

“We have funds in our budget for this calendar year and next to expand,” he said. “But it will depend on our need as far as what we will do.”