Bernie Sanders won the Democratic primary in his home state but was bested by Joe Biden in other Super Tuesday states. 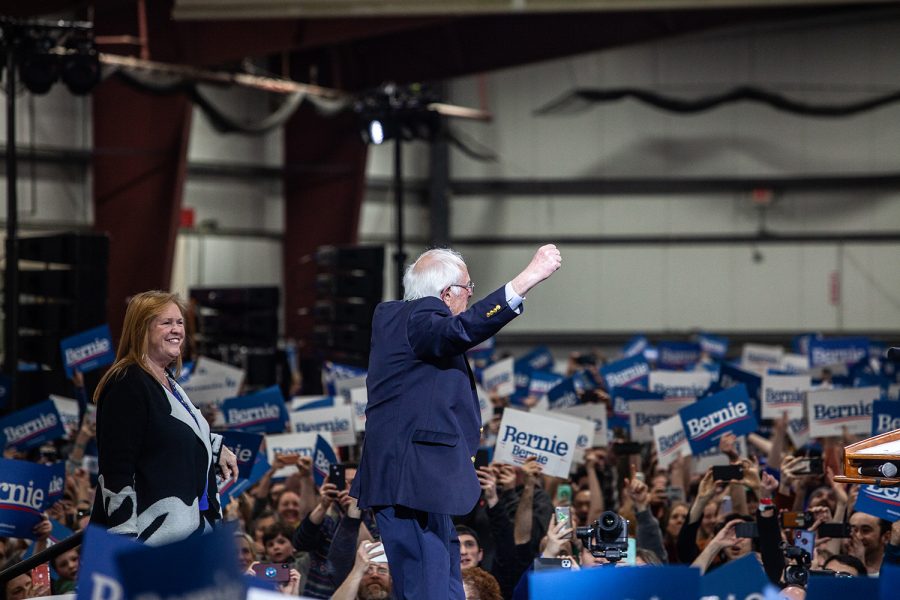 BURLINGTON, Vt. — Working off of momentum from early-voting states, including Iowa, Bernie Sanders won a majority of delegates in his home state of Vermont on Tuesday, pulling in 51 percent of the vote.

“I want to once again thank the great state of Vermont and all of the people in this state,” Sanders said at a rally in Essex Junction, Vermont Tuesday night. “Not only for the victory you gave our movement tonight, but for the years and years of love and support you have given me and my family.”

Sanders got 11 delegates from Vermont, while the other five went to former Vice President Joe Biden. It’s a less-than-ideal showing for Sanders, who took every delegate in his home state 2016 and was expected to do the same this year.

Voters in Vermont seemed certain Sanders would take the popular vote on Tuesday night. While Sanders has a celebrity status in many parts of the country, he’s a regular townie for the citizens of Burlington.

Although Sanders took the stage in Burlington two-and-a-half hours after the scheduled start of the rally, the long wait did nothing to discourage the energized crowd which broke out into familiar campaign chants throughout Sanders’ speech.

With only two states — Vermont and Colorado — being called for him at the time of his speech, Sanders was optimistic about his standing even as Biden picked up key battleground states and the popular vote in a majority of Super Tuesday states. By midnight, the Associated Press had called eight states for Biden and two more states — California and Utah — for Sanders.

“I don’t know what’s going to happen later tonight,” Sanders said. “We’re doing well in Texas right now, we won Colorado, and I’m cautiously optimistic that later in the evening, we can win in the largest state in this country, the state of California.”

The five-year Burlington, Vermont city councilor was running for reelection on Tuesday, down the same ballot as the Democratic presidential primary.

Roof said Sanders is popular in Vermont, and it’s been unique to see him advance from mayor of Burlington to a major presidential candidate.

“Right after my first election [in 2015], this whole movement started,” Roof said. “And so, to see a place that knew Bernie as mayor really come behind him for something like president was really cool.”

Vermont is the smallest of the 14 states that voted on Super Tuesday, representing 16 of the 1,357 delegates in the mix on one of the most consequential days in the presidential nominating process.

Sanders went into Super Tuesday the frontrunner in the Democratic primary, but underperformed in several states and lost his delegate lead to Biden . Biden, who had only won one primary before Tuesday, won most of the state primaries on Tuesday, picking up wins in highly contested states such as Virginia and Minnesota.

Two major moderate candidates in the race — Amy Klobuchar and Pete Buttigieg — dropped their bids for the Democratic nomination in the last few days and put their support behind Biden. Ted Calcagni, 31, a Sanders voter in Burlington, said that might make it difficult for Sanders to get a majority of delegates nationwide.

“It definitely makes me feel less certain about Bernie’s chances,” Calcagni said. “I think that Biden is not as strong of a candidate, but I think that having the moderates condense and kind of consolidate the field is going to make it more difficult.”

Sanders was the overwhelming favorite of Burlington voters. In 2016, Sanders took nearly 86 percent of the vote in the city.

“As I watched TV last night, I was reminded that once you get above 15 percent, you may get a delegate or two, and so I thought that’s why it was even more important for me to vote for Joe today, hoping to push him a little bit up to 15 percent,” she said.

Did the caucuses affect your decision?

Sanders had a strong showing in Iowa on caucus night, receiving the highest raw body count in both the first and second alignments. This victory did not seem to carry much weight in the senator’s home state, according to voters who spoke with the DI.

More than 1,000 miles from Iowa, Burlington voters said they were paying attention on Feb. 3, and most had a negative view of the delayed and inaccurate results that came in on caucus night, and in the weeks after.

“It was a predictable mess, I think, in terms of moving to a new system without having a real solid phone bank set up, their backup system, which was not adequate, failed,” Calcagni said.

Calcagni said the results in Iowa didn’t affect his ultimate decision on who to support. Ella Nadeau, a 19-year-old University of Vermont student who voted for Sanders, said she didn’t consider the Iowa results in making her decision either.

“I think that it’s just another data point, doesn’t influence how I think though,” she said. “I think mainly just what they say in those kinds of events instead of what other people are doing.”

Sharon and Andre Sturm, who voted for Sanders in Essex Junction, Vermont, said they had a daughter who went to school in Decorah, Iowa. She caucused in 2016, and they said it gave them firsthand experience of the drawn-out process and work involved in attending a caucus.

“I think it’s definitely outdated, and to have these elections scattered out. I mean, in Europe, you have six weeks to campaign, and this is all you need, and you’re fed up,” Andre Sturm said.