Rocco proving to be key for Iowa softball

In her first season as a Hawkeye, the catcher is making her presence known behind and at the plate. 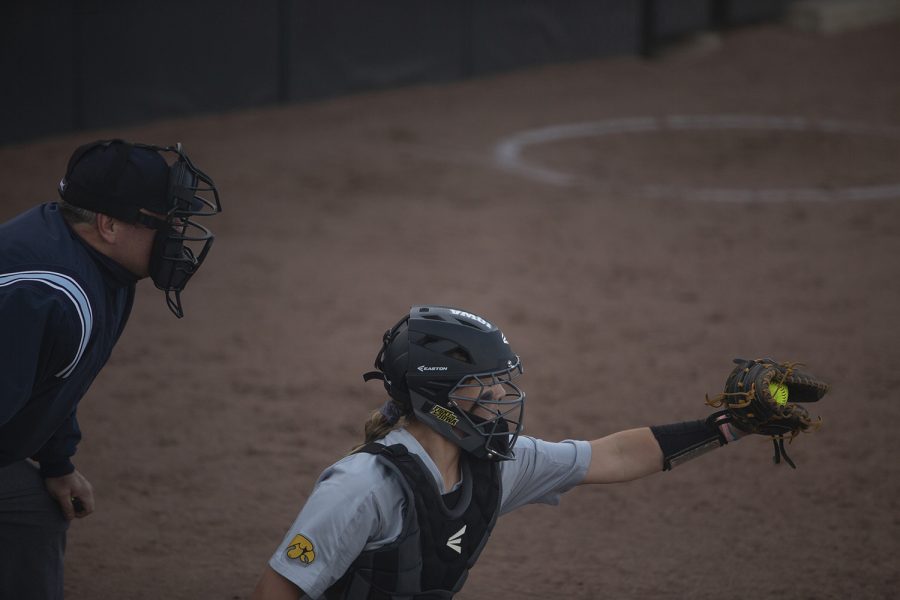 Iowa catcher Kit Rocco catches a pitch during an Iowa softball game against Iowa Central at Pearl Field on Friday, October 4, 2019. The Hawkeyes defeated the Tritons 4-0 in 10 innings.

When the Hawkeyes take on four teams in The Spring Games in Madeira Beach, Florida, this weekend, they’ll have a catcher that should make a difference.

Sophomore Kit Rocco understands how to manage her pitchers behind the plate and how to defeat her opposing pitchers when at the plate.

The Hawkeye’s team ERA is 2.14 this season, while Rocco is hitting .400 with nine RBIs and two doubles. She is tied for second for hits on the team with 14, and her batting average is third on the team.

During her time behind the plate, Rocco recognizes that each pitcher is unique and needs confidence. This is key considering that junior Lauren Shaw and senior Allison Doocy, the team’s leading pitchers, act differently.

“I know Lauren likes to mess around a little bit,” Rocco said. “She’s more of a fun, kind of happy-go-lucky, and Doocy likes to be pretty zoned in and just get the job done and be done.”

Shaw said that when she is pitching, Rocco is really energetic, distracts her from the game, dances with her between innings, and is always having fun.

She is impressed with this considering this is her first year as a Hawkeye. Last season, Rocco played at Northern Kentucky.

“She came in and filled her role right away, and she’s taking advantage of every opportunity she’s given, and she’s amazing behind the plate,” Shaw said. “She matches my energy and to the team — we’re lucky to have her this year.”

Head coach Renee Gillispie said that Rocco does a great job of framing pitches, which helps the Hawkeyes get calls at the plate to go their way.  She also said that Rocco is solid getting baserunners out.

“She shows up practice every day, and she has a focus on her mind on what she wants to do and where she wants to improve, whether it’s throw down to base and being able to throw those baserunners out or being able to get a solid hit every time she’s in the cage,” Gillispie said.

This season, Rocco has moved from being the number five hitter to the number three spot. Regardless of if the Hawkeyes have a runner on base or not when she gets to the plate, she’s looking to get on base. This is evident by her .462 on-base percentage, which is third on the team.

“That’s just confidence,” Rocco said. “And that’s been built up through the whole offseason training of everything that we’ve been working on. Having coach [Trena Prater] and coach [Gillispie] be able to throw live to us in practice and even our own pitchers throwing live to us in practice really helps us all see the ball really deep in the zone.”

In The Spring Games, the Hawkeyes will face Miami of Ohio and Florida Gulf Coast on Friday, and on Saturday they’ll play South Alabama and Florida Atlantic to finish out the weekend.

Though the talent level varies among each team, the Hawkeyes are more focused on themselves than anything else. At practice on Wednesday, they prepared both offensively and defensively for the bunt.

“This is the preseason,” Gillispie said. “This is our season to work out kinks and find out who are starting lineup is because when conference begins that’s the roll.”