The No. 10 Hawkeyes host the No. 6 Fighting Illini this weekend at Carver-Hawkeye Arena. 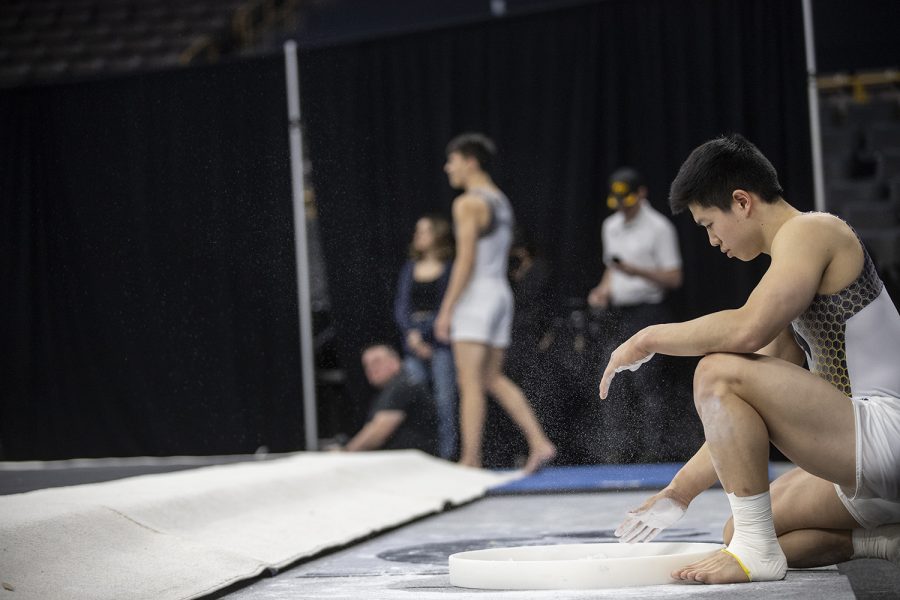 Iowa all-around Bennet Huang puts chalk on his hands during a Men’s gymnastics meet against The University of Minnesota and the University of Illinois at Chicago. The Hawkeyes won with a final team score of 400.00. Huang scored a total of 14.00 on his floor routine.

The No. 10 Iowa men’s gymnastics team hosts Big Ten rival No. 6 Illinois inside Carver-Hawkeye Arena on March 1. The previous matchup between the two resulted in a 398.800-410.450 loss for the Hawkeyes last season.

Junior Bennet Huang leads the Hawkeyes in the all-around with a season-high 81.050 and an average score of 79.670 and is ranked ninth nationally. His career-best on vault (14.550) was performed last year against the Fighting Illini in Champaign-Urbana.

Huang was the sole gymnast from Iowa competing in the World Cup, which is a national meet in preparation for building the Men’s National Team for USA. The Palo Alto, California, native finished 27th overall in the preliminary round (77.900), with his best coming on floor and earning a 13.750.

The Hawkeyes have strength on floor going into the meet, with sophomore Evan Davis leading with a career-best 14.400 against Nebraska in January. Davis earned Big Ten Gymnast of the Week Feb. 11 after his stellar performance against top-ranked Oklahoma.

Senior Mitch Mandozzi is also a key component of the Hawkeyes’ success. He takes vault for Iowa and completed a personal 14.600 against the Cornhuskers.

The Hawkeyes are ranked fifth nationally on vault, seventh on high bar, eighth on floor, 10th on pommel horse, 10th on parallel bars, and 11th on rings.

The Fighting Illini are 3-1 currently in the season, staying steady at .500 in the Big Ten. The team’s only loss in the conference is to Minnesota. Junior Jordan Kovach competed in Las Vegas at the Winter Cup for the Fighting Illini, finishing 37th on parallel bars (11.800) and 39th on vault (12.100).

Illinois is ranked nationally second on rings, third on vault, sixth on pommel horse, sixth on floor, eighth on parallel bars, and tenth on high bar.

Iowa’s next meet is March 7 in Columbus, Ohio, where the Hawkeyes will take on Ohio State at 12:30 p.m.

The March 1 meet is one of only four remaining dual competitions for the Hawkeyes before the Big Ten Championships April 3 in Minneapolis, Minnesota. The NCAA Tournament shortly follows on April 17.