On Senior Night, the sophomore center showed that the future for Hawkeye women’s basketball is already here. 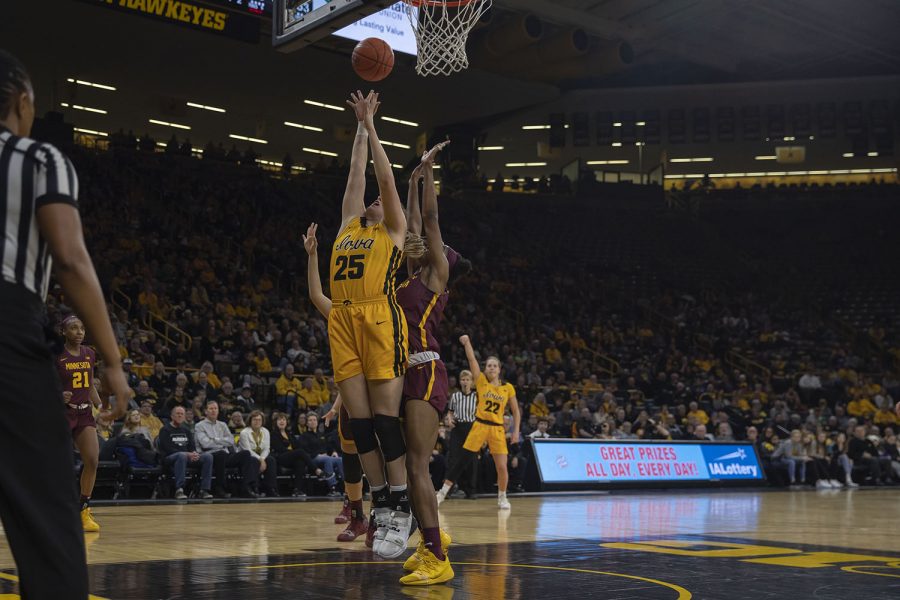 Iowa forward Monika Czinano shoots a basket during a women's basketball game between Iowa and Minnesota at Carver Hawkeye Arena on Thursday, Feb. 27, 2020. The Hawkeyes defeated the Gophers, 90-82.

On Senior Night, it was time for the seniors to shine. They did, but Iowa couldn’t have defeated Minnesota without the help of sophomore center Monika Czinano.

Czinano scored the first basket of the game and never looked back. At game’s end, she had 24 points —tied for the team lead and a career-high — and six rebounds.

“There’s more than one person that goes into one of us having a good game,” Czinano said. “So, I mean I think we all played really well. Our defense definitely got better in the second half. But I’m really just proud of my teammates. This is big for our program, big for our seniors, and I’m really glad we came out with a win.”

Late in the first quarter, Czinano made a nice pass from the low post to senior guard Makenzie Meyer for a corner 3-pointer. On the Hawkeyes’ next offensive possession, Czinano got an offensive rebound and made a layup seconds later. At the end of the quarter, Czinano had six points.

The second quarter was a continuation of the first, as Czinano tallied eight points. With under three minutes to go in the half, freshman guard McKenna Warnock made a smooth pass from the top of the key to Czinano for a layup under the basket.

When it got close at the beginning of the third quarter, Czinano helped distance the Hawkeyes from the Golder Gophers. She made a nice pump-fake layup to extend the lead to three with 7:51 left in the quarter. A little over a minute later, she made a mid-range jumper.

Right before the buzzer sounded, she made a layup off a pass from senior guard Kathleen Doyle to extend the lead to 12.

“I mean, the passes that my teammates have to throw, a lot of the passes are trickier than sometimes they look,” Czinano said. “They have to be nice teardrop passes too, and I got a good one, so shout out to them.”

Iowa head coach Lisa Bluder was impressed with how Czinano has played at such a high level this season, including Thursday night.

“It’s just that consistency of working hard,” Bluder said. “You know, you work hard, you usually get good results. Doesn’t guarantee it, but usually it does, and she works hard.”

Foul trouble kept Czinano out for a good chunk of the fourth quarter, but she did make two key layups in the final three minutes to put away the Golden Gophers final attempt to take the lead.

As suggested by her season stat totals, Czinano is having a very nice season. After not starting at all last season, she’s played every game but one this season, starting 26 of them. She’s getting hot at the right time but has been consistent all season. Czinano leads the nation in field goal percentage at 72.6 percent.

As the seniors said goodbye at their last regular-season home game, they knew that a good player would step up even more next season.