A team of University of Iowa researchers electrically stimulated the amygdala, an area within each cerebral hemisphere of the brain that controls memory, decision-making, and emotional responses, to study its connection to breathing loss and Sudden Unexpected Death in Epilepsy (SUDEP). 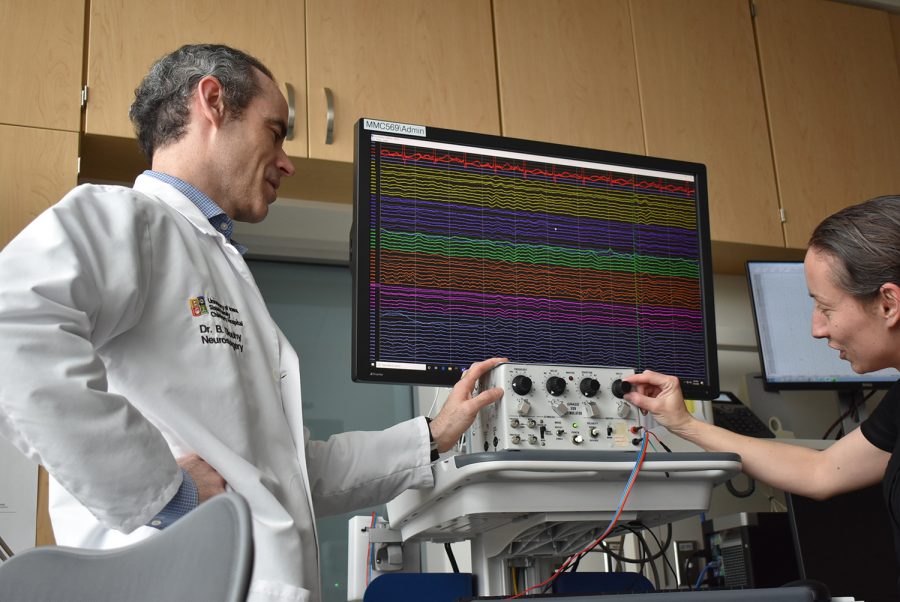 Abby Watkins for The Daily Iowan

Brian Dlouhy poses for a photo a University of Iowa Stead Family Children’s Hospital on Tuesday.

A University of Iowa research team is the first to ever use electric stimulation on the amygdala to affect loss of breathing during epileptic seizures — sparking the possibility that they may be able to predict if and when people are at a greater risk of Sudden Unexpected Death in Epilepsy.

UI Assistant Professor of Neurosurgery Brian Dlouhy unwittingly began the initial research during his residency at the UI while pursuing his interest in the amygdala. Originally, Dlouhy said, he was studying the amygdala’s fear network and its emotional response until he discovered research from animal studies that suggested the amygdala inhibits breathing.

At the same time UI Department of Neurology Chairman George Richerson was interested in looking at Sudden Unexpected Death in Epilepsy (SUDEP) and saw labs that Dlouhy was working within, Dlouhy said. From there, he said, Richerson came up with a hypothesis that involved testing the amygdala in humans.

Dlouhy and his team of UI researchers tested the hypothesis on volunteer epilepsy patients to see if the amygdala specifically affected breathing during seizures. He said the discovered effect of the amygdala’s stimulation occurred due to a natural evolution of events and happened by chance.

To study patients’ breathing during seizures, they first needed to locate the area in the amygdala where the seizures’ focus was, Dlouhy said. Electrodes were placed into the brain, unlike the more well-known technique of using scalp EEG electrodes, which allowed them to record directly from the specific neurons that may be causing the seizures. The process gave researches a very accurate location of where the seizure focus is, he said.

UI Vice Chair for Research John Wemmie said even though the patients stopped breathing, they weren’t aware that their breathing stopped and weren’t distressed when researchers informed them what happened.

Dlouhy said they’ve studied a total of 30 patients, as young as three and as old as 57, and have stimulated over 50 sites within the amygdala. Now, he said, they are able to pinpoint the exact site — about a millimeter in diameter — in the amygdala that causes the patient to stop breathing during a seizure. Dlouhy believes that in the future this research may be able to reverse the effect and actually stimulate breathing.

“The reason that people die had been a bit of a mystery, it’s been thought that it was cardiac arrest that occurred in a person with epilepsy [due to] anesthesia. It’s now becoming clear that for a large number of patients it’s that their brain stops breathing,” Richerson, the neurology department chairman said. “[They] stop breathing after a seizure and then die. So understanding why this happens is important because if we understand the mechanisms, then we can come up with better treatments or preventive measures that you can use to keep people from dying.”