Opinion: The problem of suffering should include nonhuman animals

Eating meat is treated as normal in most societies, but using animals as commodities is ethically troublesome. 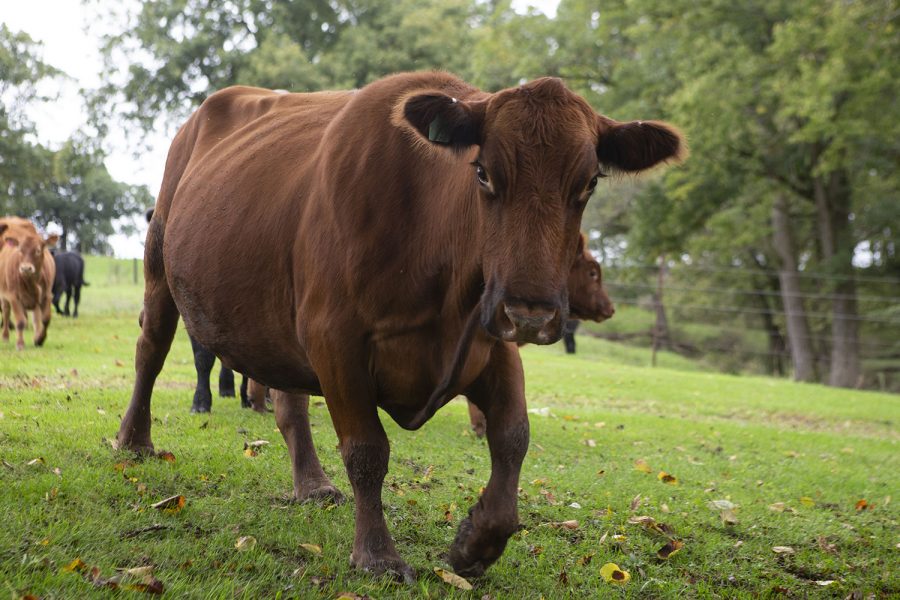 The Bierman family moves cattle from one pasture to another outside Tipton, Iowa on Sunday, October 6, 2019. Jamie Bierman identified her family as ‘meat snobs,’ citing that they can taste the difference between grass-fed and grass-finished beef. She went on to say it is up to consumers to ask the right questions to determine what types of practices farmers use to produce their food.

That reservation is common when speaking on the ethical questions surrounding animal consumption. The painful process of shredding a chicken’s beak off, formally known as debeaking, in pursuit of a delicious chicken sandwich is commonplace in American culture.

However, replace “chicken” with “golden retriever” and “debeaking” to “de-snouting,” and readers feel quasi-nauseous.

The argument against eating meat is not synonymous with lowering the value of human DNA, rather, it is raising the moral worth of nonhuman animals.

Peter Singer, godfather of the vegan movement, illustrates the suffering problem in his masterpiece Animal Liberation. He wrote, “If a being suffers there can be no moral justification for refusing to take that suffering into consideration.”

Account for every dimension worth considering for a sentient being to have “worth” — such as the range of animals’ intelligence and cognizance of their suffering — in nearly every respect, pigs are as valuable as dogs, if not more so. Nonetheless, humans will drool at the sight of a sizzling pork chop, ignoring the required suffering to land that meat on their plate.

“There are larger problems to worry about” is not foreign to a vegan’s ears. This thinking is deemed inappropriate  upon learning your neighbor’s dog is missing. Yet, we have convinced ourselves that the slaughter of 150 billion animals a year does not permit a moment of attention.

I will certainly grant that this problem, like many of our problems, is largely contained to the first world. Food is still scarce in many regions worldwide, let alone plant-based diets. And in areas with vegan options, it may be financially prohibitive. These are not the people I am addressing; in general, those reading this could minimize their animal consumption if they choose.

Many comments to articles such as these read, “Stop telling people how to live.” By “live,” do they mean to suggest an argument against keeping the vast majority of innocent lives locked in filthy cages is wrong? Do they deserve to live with no room to step, only to have their bellies sliced open or a bolt shot through their head, to simply preserve another option for people to “live”?

Many practices are prohibited, if permitted, which would allow more options to “live.” We don’t legally permit murder of humans in the name of lifestyle choices. It is a depressing observation that homicide is treated as an entirely different category of taboo than slaughtering innocent beings of another species.

Nonhuman suffering extends beyond the meat industry. For instance, many people will sometimes buy animal products, such as leather. If there’s no cultural reason, it ought not to be the case that DNA determines whether or not a sentient being’s skin can be worn for decoration.

The more compelling response for bleeding out living beings for flavor runs, “one person cannot make a difference.” Although counter-intuitive, one person eats 7,000 animals within their lifetime. Preventing 7,000 from suffering is certainly making a difference — consult the animals for confirmation.

In future generations, the scale of our meat consumption will be rightfully viewed as a moral failing. I do not wish, as many writers have pronounced, to place factory farming in the depths alongside slavery. A problem need not reach the stakes of human ownership to raise awareness for its existence.

But as for the taste, I’ll stick with food that didn’t suffer.