As part of the University of Iowa course Art at the End of the World, students will lead an open book club that seeks to provide stimulating conversation about apocalyptic literature. 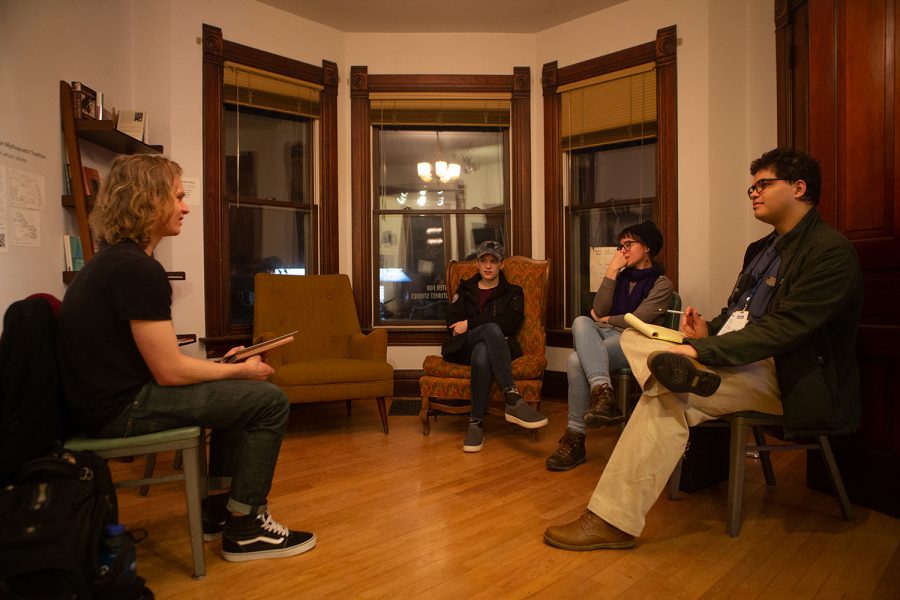 Josh Siefken, a University of Iowa senior, leads Art at the End of the World Book Club on Wednesday, Feb. 12, 2020, at Public Space One, 229 N Gilbert Street. The group discussed the 2018 novel Severance by Ling Ma.

Every Wednesday evening, a group of students led by Vero Smith, the associate curator of special projects at the Stanley Museum, gathers in Public Space One to discuss the end of the world. The club will run every Wednesday from 6-7 p.m. until April 22.

The discussions are inspired by the apocalyptic books that the group reads for their class, Art at the End of the World, taught through the University of Iowa’s Art and Art History program by Smith. The club is also open to the general public.

Smith chose the book list for the class but the students run the book club itself and lead the discussions. On Wednesday the chosen book was Nnedi Okorafor, Who Fears Death by Lucy Corin.

“It’s a collection of short stories that illustrate the end of the world from different perspectives,” said Yager Palad, who led the discussion that night. “It’s very funny in a very dark way.”

Palad is a graduate student at the UI with a focus in printmaking.

“I’m hoping we get more younger folks, like people who are current students at the [UI],” Smith said.

Smith said she was excited to share the book list for the club, which features authors such as Octavia Butler and Margaret Atwood.

Smith said the discussions about apocalyptic literature that will take place every week will explore the ways in which humans struggle in times of crisis.

“This book club is focused on concepts of the apocalypse because we live in anxious times full of dire warnings,” Smith said. “However, no one seems to agree on exactly how or when the world will end. In the meantime, we are here, living in dread. We all have much to learn from previous thinkers and creators about possible world endings and how they might be averted or hastened.”

Despite the darker content of many of the books, Smith and her students hope the club will produce lively and exciting discussions. A different student leads each meeting. During the Wednesday discussion, Palad read one of the short stories from Corin’s collection out loud.

Smith stressed that Art at the End of the World is an opportunity for students and community members to speak about literature, politics, and world issues outside of school.

“The goal of the book club is for my students to think about how we can continue to engage in intellectual conversations and community beyond a classroom setting,” Smith said.  “I hope this becomes a goal for them when they graduate from their various programs — that they keep seeking out conversations that are interesting and based in reading, and in literature, and in artistic production.”