The Iowa City Public Library kickstarted its new snack program which provides free snacks to children to combat food insecurity within the community. 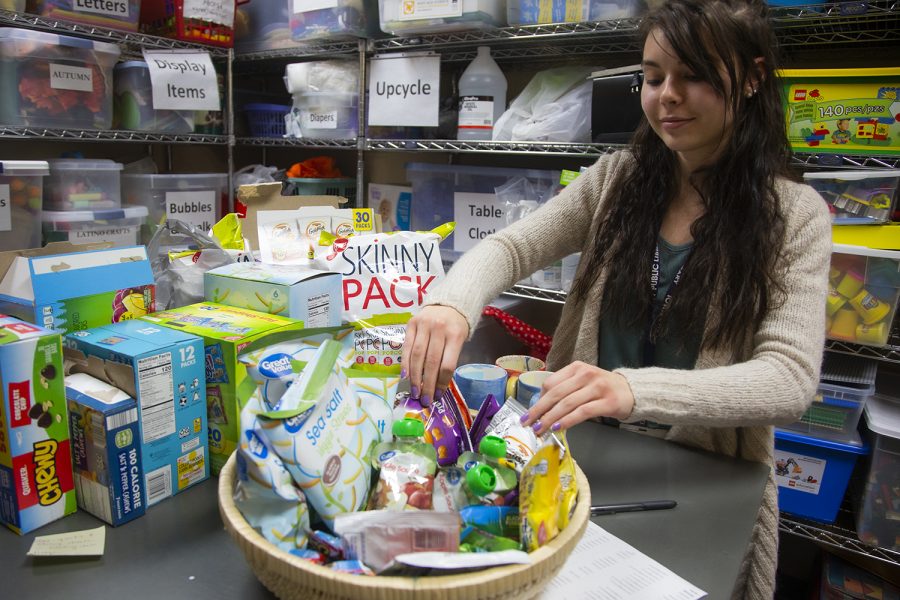 Hayden Froehlich for The Daily I

Children’s Library Intern Lauren Claeys prepares snacks in the Iowa City Main Library on Wednesday, February 19, 2020. The library began serving snacks to children everyday from 4:00 to 5:00 since Feburary 1st. “Before they would ask and we could only give them a few crackers or raisins,” Claeys said. “Now we can give them much healthier options.”

The Iowa City Public Library implemented a free and daily snack program this year for children that visit the library with a donation from a local church, providing an opportunity to combat food insecurity.

Zion Lutheran Church donated about $3,500 to the library to purchase snacks for the program, which occurs daily from 4-5 p.m. Children ranging in ages from 1 to 18 years old can grab a free snack at the children’s desk from a basket the staff prepares.

Iowa City Public Library Children’s librarian Anne Wilmoth said kids would sometimes stay at the library after school every day until closing time, often asking if the library had food or snacks.

“Staff would be buying things with their own money, but it was when they had the time or were out and about,” Wilmoth said. “We wanted to go to something that was more concrete for the kids that was consistent and reliable.”

When the church reached out to Wilmoth and said they were looking for a new social-justice project to donate to, she said she recommended they donate to the public library with the lack of snacks fresh on her mind.

Many children within the Iowa City Community School District are a part of the federal-free or reduced-priced meal lunch program throughout the school year. The amount of students relying on this program per school varies from 4 percent to almost 77 percent of each school’s student body, according to the Des Moines Register’s database for Iowa students that qualify for free or reduced-priced lunches in the most recent 2013-14 survey.

According to the database, Elizabeth Tate Alternative High School has the highest percentage of students in the Iowa City schools who qualify for the free and reduced-priced meal lunch program, at 76.3 percent. Mark Twain Elementary and Horace Mann Elementary School sit at 73.6 percent and 56.1 percent, respectively.

With the funds from the Zion Lutheran Church’s annual Alternative Christmas event, the library was able to officially launch the snack program on Feb. 1.

Wilmoth said the library was able to use the funding to serve about 25 to 40 children on average per day. She said the money provided should be able to support the program through the end of the academic year and plans to keep the program going as long as there is a need for it.

Zion Lutheran Church representative Sue Askeland was part of the committee that reached out to Wilmoth about the donation. She said this was helpful for students who were on the Free Breakfast/Lunch Program at school and were arriving at the library without having something to eat.

“We are supporting an outreach program that saw something that was a need in the community,” Askeland said. “Parents that have their children attend the library after school are knowing their child is now getting some nourishment.”

The library has provided programs like this in the past, Wilmoth said, as the library was a snack site for the U.S. Department of Agriculture over the summer. They plan on being a site in summer 2020.

Iowa City Public Library children’s librarian Casey Maynard said that, because students only qualify for the free and reduced-priced meal lunch program during the school year, the snack site during the summer was a way to provide kids with full bellies that they were not receiving from home.

“… Any way that we can combat and alleviate some of the hunger in these kids, we will provide them that opportunity,” Maynard said.

Now that the free snack program is operating under a grant from the church, she said, the library can continue to provide extra food opportunities to children throughout the school year.

“Hunger is a need in Iowa City,” Wilmoth said. “I think there are only benefits to providing food to people who are hungry. It’s a small snack, but any gesture we can make to meet a community need and strengthen our role as a community member.”