Hancher hosted three spoken word poets Friday night, who told their stories about the joys and discrimination they felt growing up Muslim in America. 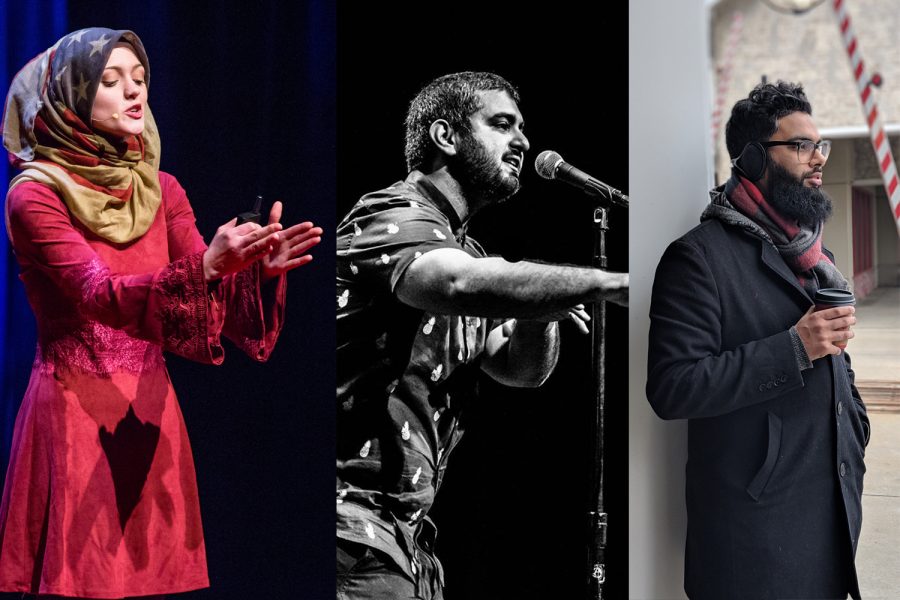 The three poets were born across the United States, growing up in vastly different places, but their experiences being Muslim in America brought their poetry together.

Warsi and Safi made their way to the stage to start the night off with a shared poem about DJ Khaled and his road to success as a Muslim. Kassir and Safi followed it up with their own shared poem about the politics of being Muslim and being ignored or demonized by the media.

What struck me the most about these poems was the hope that came through the pain. In the midst of discrimination and uncertainty, there was a strong, brilliant light that shined through.

Warsi took the stage as the first of the three solo performances. His poems flowed like rap lyrics, fast and complex, filled with stories of childhood struggles.

Warsi shared stories of his father through his spoken word poetry and the speeches he gave in between. There was a beautiful juxtaposition between his father’s own war-filled childhood in Pakistan, where he had developed an early love for learning, and Warsi’s quieter childhood in New York City where he felt lost. Despite this, humor still ran throughout the piece.

“My dad’s so protective he didn’t let me go to Chuck E. Cheese because he said it’s a children’s casino,” Warsi said.

Warsi ended on a poem called Those Eyes, a piece about the looks he recieves because of his appearance — which range from attempts to understand, to threatening stares.

Kassir came up next with a different flavor, but the same hope and humor.

Kassir’s poems ranged from her troubles getting a haircut with the rules of wearing a Hijab, and her love of her family and countries. Her struggles with finding a balance between her Syrian and German identities took a prominent role in her poetry.

“It’s my responsibility to invent culture with every step I take,” Kassir said.

Safi took the stage last, his first poem drawing on the bullying by the other kids throughout his childhood in College Station, Texas. One of the children in his poem asked him where he was from. He told the child he was born in Ames, Iowa.

“Is that in the Middle East?” the child asked him. The audience erupted in laughter.

Laughter was sprinkled throughout all his poems, but perhaps none so prominently than the poem about his grandma, a high-stakes smuggler of saffron, who stole the spice to make his mother happy.

A common culture was presented and created throughout these poems, one of pain and humor and self censorship — but most importantly, one of hope.