Iowa City City Council gave the green light for the 12 E. Court St. development project to be a 15-story building, amid pushback from student-government bodies. about its effect on housing affordability. 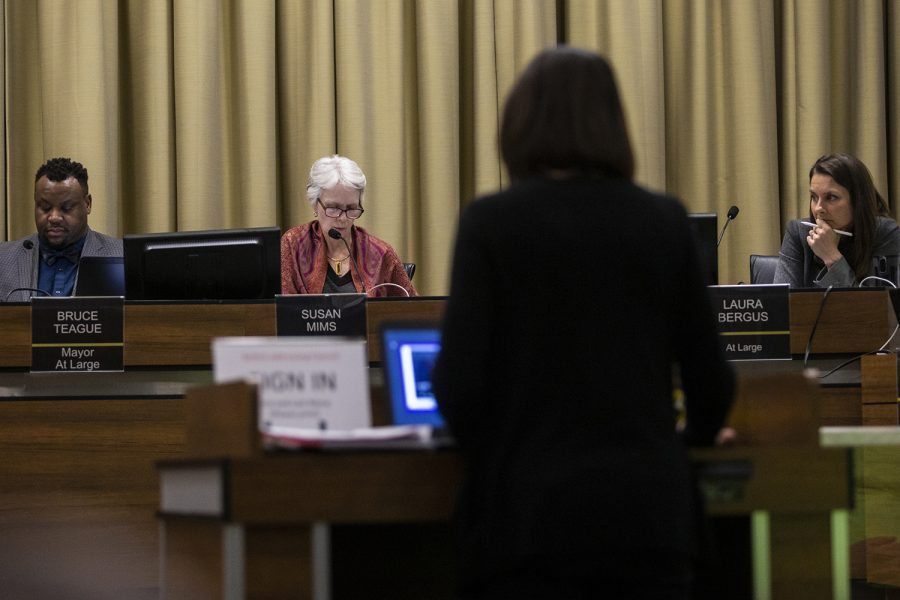 A community member addresses the council about a zoning proposition regarding a proposed animal recreation center at an Iowa City City Council meeting on Tuesday, Feb. 18, 2020.

After a failed motion to defer the decision once again, the Iowa City City Council passed an additional seven-story height bonus to a new luxury apartment complex at 12 E. Court St. in a 5-2 vote. The building will now reach a proposed height of 15 stories, despite opposition from UI student-government bodies.

The council continued the conversation regarding height additions to the development from its joint session with University of Iowa student-government bodies Feb. 11.

Nathan Griffith and Rob Decker of Neumann Monson Architects, the developers of the building, fielded questions about the project before the council at Tuesday’s meeting.

Griffith said the construction of the apartments at 12 E. Court St. is “slab and column,” meaning the interior walls can be removed or demolished in the future, with adaptability to renovate the inside with ease. The balconies play a critical role in adaptability and viability of the project, he added.

Decker spoke to the environmental impact of the development and its walkability, stating that the proximity of the building to the UI campus would lessen the impact of car usage by students.

Iowa City community members participated in public comment before the council, advocating for and against the seven-story height addition. Topics of discussion included energy performance, union involvement, and affordability for UI students.

A dozen citizens spoke before the council, with seven against the added height and five in its favor. Students, union workers, and landlords alike addressed concerns of affordability.

UI Student Government City Liaison Austin Wu spoke out against the bonus, saying that the council should take into account undergraduate and graduate students’ opinions — which were presented during the joint session with the council Feb. 11. The amenities that the building would provide do little to promote naturally occurring affordability, Wu said.

Union Carpenter Local 1260 member and UI student Kara-Marie Halling said she was in favor of the height bonuses as both a student and a parent.

“[This would be] housing for my kids,” Halling said. “It is important to take into account more than just the single student. It’s for families, too. Day care is expensive. This would be a perfect place for family units for the college.”

Iowa City Historic Preservation Commission member Cecile Kuenzli was against height bonuses and the luxurious amenities of this development. She said each would alter the original landscape of Iowa City.

“[We need to keep] preserving the uniqueness of the community and appearance of the city,” Kuenzli said. “When one looks at a building, one needs to think in the context of its location.”

The council began discussing amendments to the development after a deferral motion by Iowa City Mayor Bruce Teague failed.

In a 7-0 vote, the council passed an amendment to remove balconies on the proposed building and also added an environmental sustainability standard. The proposal of parallel parking remained, and approval of the skywalk amendment was not passed in a 2-5 vote.

As previously reported by The Daily Iowan, UI student-government bodies voiced their concerns about the 900-unit development to City Council Feb. 11, arguing that these apartments are a luxury and unaffordable for students who make up a significant portion of the renters’ community.

He added that the construction of this building could provide more attention to more affordable and older apartment complexes, the DI previously reported.

According to City Council documents, the Iowa City Planning and Zoning Commission recommended approval of the height bonus by a vote of 5-2 on Jan. 16.

Griffith addressed concerns over the skywalk and balconies that would be added to the building during construction. In response to previous worries that the skywalk would block views of the Old Capitol, Griffith said the skywalk would not be an issue.

“There is no view to the Capitol,” Griffith said. “With the [skywalk], it will allow a view of the Old Capitol from 12 E. Court to T. Anne Cleary walkway.”

Property owner and landlord for Solstice Properties, LLC., Kelly O’Berry said during the meeting that landlords such as herself are concerned with more than just views of landmarks; they are concerned with the well-being of and affordability for students.

“[This is about] the people that provide a service and care about students,” O’Berry said. “We don’t farm it out to large companies that don’t care about the students.”

Editor’s note: A previous version of this article referenced Kelly O’Berry as a University of Iowa official. She attended the meeting in her capacity as landlord at Solstice Properties LLC. The DI regrets the error.