A University of Iowa internal medicine professor has spent the last decade studying muscular atrophy, working to find a way to treat and even prevent the disorder. 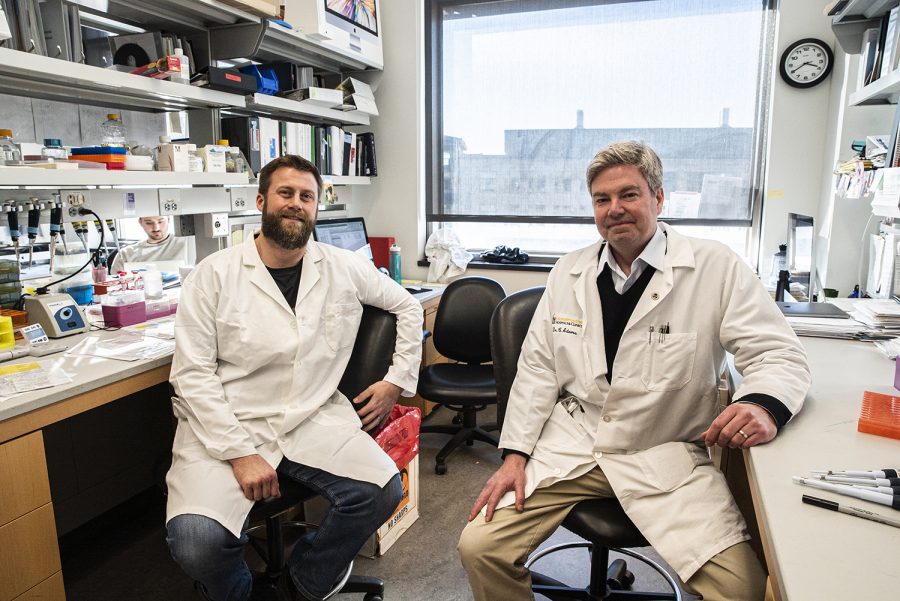 Tate Hildyard for The Daily Iowa

Research scientist, Scott Ebert, and University of Iowa Professor, Chis Adams pose for a portrait in the Papajohn Biomedical Institute on Tuesday, Feb. 11, 2020. Adams’ research focuses on how diabetes and obesity affect muscular atrophy. He and his research team has removed a specific gene in mice to affects the disease.

As people grow older, their muscles begin to weaken, and they may start feeling the effects of muscular atrophy — a condition where the muscle wastes away. One University of Iowa researcher hopes to solve this problem by studying the condition.

UI internal medicine Professor Christopher Adams has studied muscular atrophy at the molecular level. The condition is caused by a lack of muscle use, aging, malnutrition, or illness that leads patients to have weakened muscles.

Adams and his colleagues are studying the nature of human muscle through biopsies when muscular atrophy occurs, he said, compared to people without the condition.

The biopsies allow the research team to identify molecules in proteins associated with muscular atrophy that are in mRNA transcripts, which are complementary to DNA strands, Adams said.

The researchers then look at culture, or laboratory-grown cells in mouse models and investigate if those proteins or genes are required for skeletal muscular atrophy, he said.

Adams has been researching muscular atrophy for 10 years, and said he first became interested in the condition after observing it in many patients as a physician.

“It’s just not well understood at the molecular level, and we don’t have any effective ways to intervene and treat our patients — prevent it in our patients,” Adams said.

Although the researchers have not found a treatment for muscular atrophy yet, they have found molecules that are potential candidates for the cause of the condition, he said.

Adams founded Emmyon, a biotechnology firm, to help translate his research in 2012. The company works in a laboratory on proteins and genes and translates it into something that can help people, Adams said.

“So, the translation means, take it out of the laboratory and take it back to the patients,” Adams said.

Scott Ebert, vice president of biology at Emmyon, has worked with Adams at the company for six years.

During that time, they have published articles on the molecular mechanisms involved with muscular atrophy and developed molecules to improve muscle strength, muscle mass, body composition, and metabolism, Ebert said.

Because muscular atrophy is a common condition, he said, understanding its causes can help develop ways to inhibit it and improve people’s lives.

“With muscular atrophy being such a common problem, it’s critical that we understand more about the mechanisms that cause it,” Ebert said. “With this knowledge, it is our goal to then use this information to find ways to inhibit muscle atrophy and hopefully improve the lives of all those people affected by muscular atrophy.”

After meeting Adams about five years ago, John Talley, Emmyon vice president of chemistry, thought Adams approach to studying muscular atrophy was interesting and wanted to be a part of it.

He comes up with new chemical structures to use in the genes Adams is studying, Talley said.  It’s important to study muscular atrophy because if a patient has restricted movement for long periods of time, it can cause the muscle to weaken, he added.

“Anybody that’s restricted to bed rest or has an injury, broken leg, aging with muscle loss … if we can figure out a treatment modality for that disorder, that would be a pretty big deal,” Talley said.