The Hawkeyes have overcome a number of challenges this season and their head coach should be in the conversation for Big Ten Coach of the Year. 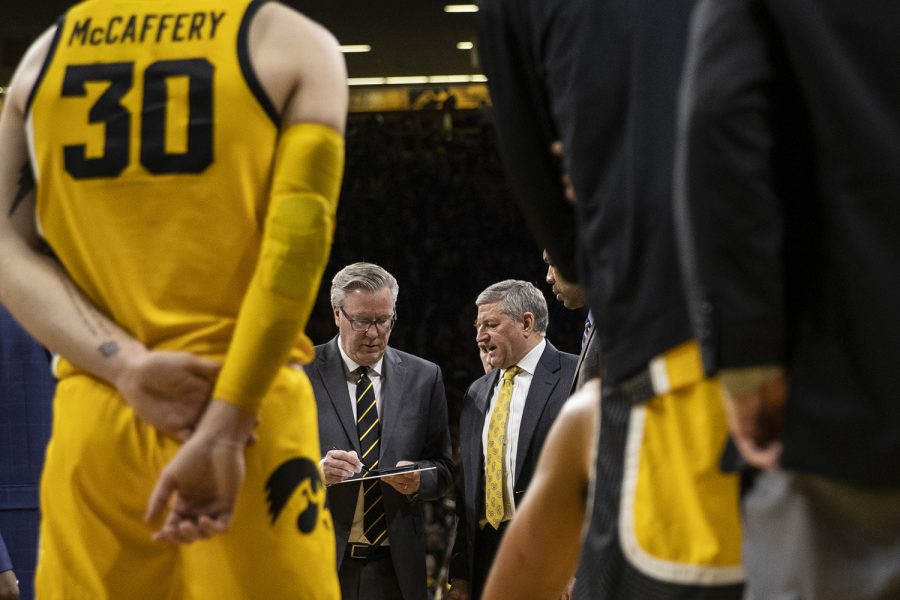 Iowa head coach Fran McCaffrey and assistant coach Kirk Speraw discuss strategy during a timeout during a men’s basketball game between the Iowa Hawkeyes and the Nebraska Huskers at Carver-Hawkeye arena on Saturday, February 8, 2020. The Hawkeyes defeated the Huskers 96-72.

Very few figures within Iowa athletics are subject to as much criticism as head men’s basketball coach Fran McCaffery. Some of that is warranted, but this season McCaffery has shown that he’s one of the best the Big Ten has to offer.

McCaffery should be in the conversation for Big Ten Coach of the Year. With what Iowa has displayed this season, the 10th-year Hawkeye head coach would be a worthy winner.

In all reality, he probably won’t win.

The award is almost certainly going to Penn State’s Pat Chambers or Rutgers’ Steve Pikiell. Both coaches have revived dormant basketball programs. Penn State is ranked in the top 10 in the country, and Rutgers is likely headed its first NCAA Tournament in 41 years.

Both coaches are deserving recipients if they were to win the Big Ten’s coaching honor.

McCaffery has just as strong a case.

Iowa has continued to shift the perception of the program this year by succeeding even when it doesn’t seem like the team should be.

Before the season, most experts picked Iowa to finish toward the bottom of the Big Ten.

Flash forward, and Iowa’s tallied 18 victories and is tied for third place in the most competitive conference in the nation. Most of those games have been played with key contributors out of the lineup.

Jack Nunge (knee) and Jordan Bohannon (hip) were forced to shut things down due to injuries before the heart of the conference schedule even had a chance to start. Patrick McCaffery has been sidelined almost the entire season with health issues related to his 2014 treatment for thyroid cancer.

Standout freshman CJ Fredrick is the latest question mark on the Iowa roster. After previously missing two games earlier in the season with a stress reaction in his foot, Fredrick is out indefinitely with an ankle injury.

None of this has stopped Iowa from being competitive. Even with limited lineup options, McCaffery and the Hawkeyes continue to find ways to win.

McCaffery and the Hawkeyes embraced the us-against-the-world mentality from the start of the season. It was most evident in Iowa’s most recent win Feb. 16 against Minnesota.

The team had only eight available scholarship players at a venue it’s had trouble with of late.

In a game where it seems likely that past Iowa team’s would have floundered at the end, the Hawkeyes used a late comeback to silence the crowd.

That, too, has been the case all season.

In games on Jan. 27 against Wisconsin and Feb. 2 against Illinois, Iowa trailed late but grinded out a victory. The Hawkeyes have a toughness to them this season. That goes back to their head coach.

McCaffery has earned praise from coaches around the conference this season, including Illinois’ Brad Underwood — who said Iowa’s unlikely success story this season can be attributed to McCaffery.

If the regular season ended today, Iowa would be seeded third in the Big Ten Tournament. A trip to the NCAA Tournament is all but guaranteed, barring a “Fran fade” to rival them all.

McCaffery’s critics haven’t been shy in blasting him in the past when things haven’t gone Iowa’s way. It’s only fair that they attribute the same volume of praise now.