After finding success in the latter half of the 2019 season, Iowa infielder Brendan Sher has kept his hot streak going early in 2020. 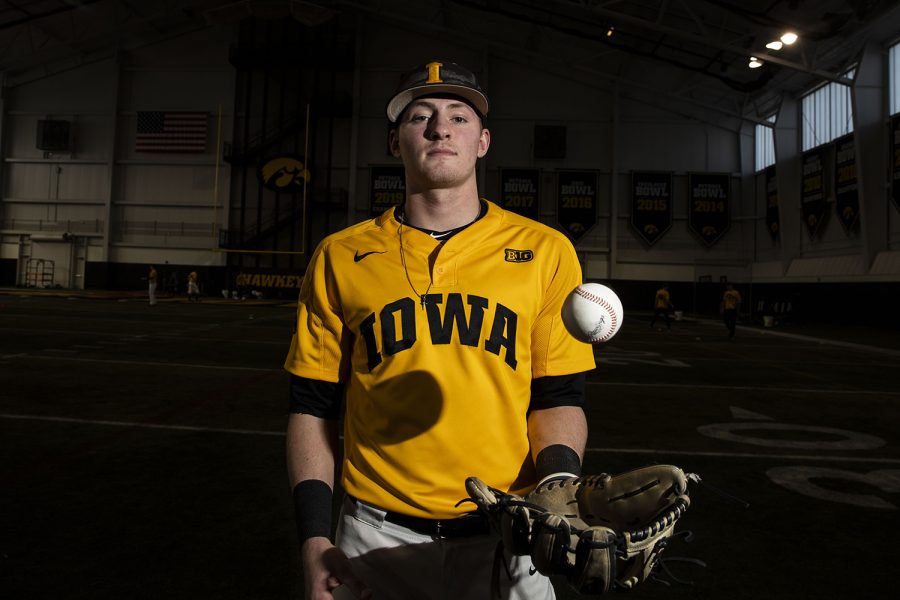 Iowa infielder Brendan Sher poses for a portrait during baseball media day in the UI recreation building on Thursday, Feb. 6, 2020.

Carrying momentum over from one season to the next isn’t easy, but Iowa infielder Brendan Sher has had no problem.

It’s still early, but Sher recorded three hits in Iowa’s first three games of the season. After hitting .301 in 2019, Sher has upped his numbers to .375 with two extra base hits, three walks, and two runs scored.

It’s a welcome start to a new campaign.

“The biggest thing for me was staying consistent last year and making the most of every opportunity that I got,” Sher said. “I think I’m just going to stay with what I was doing and keep trying to be consistent.”

Sher didn’t begin to receive consistent opportunities at the plate until April of last year.

The Indianola, Iowa, native made his mark during midweek games throughout the early part of the season before playing his first full weekend series against Ohio State starting on April 26, 2019.

With Tanner Wetrich’s graduation, Sher took the reins at shortstop for all three contests to open the season. He also possesses the ability to move around the infield.

Along with shortstop — which seems to be his primary position for 2020 — Sher spent time at third base and second base on 2019.

His versatility will only help the team as the season runs on.

“You got Brendan Sher who can play all three, and that’s great,” Iowa head coach Rick Heller said. “If something would happen where Izaya [Fullard] was not playing second base, you’ve got some really good options.

“Brendan’s kind of the guy who can start at shortstop but probably plays third and second better than some of the others.”

Sher will also benefit from the experience he picked up in his first season.

The sophomore saw what it takes to compete in the Big Ten throughout his first season, and he’s taken the steps to improve.

Sher said he entered the program at 180 pounds. Now, he’s listed at 200 and has the ability to put more behind his throws and hitting.

“I don’t know too many people at this level who are satisfied with what they did last year, no matter how good or how bad it was,” Sher said. “I know, for me, I’ll never be satisfied. There’s always more I can do. There’s always improvement on my end of things, not only personally, but on helping the team, as well.”

Finding the field last season also means Sher shared the field with some of the same teammates he’ll play with this season.

Iowa’s infield is deep. Along with Sher, Fullard returns at second base as Iowa’s leading hitter. Newcomer Peyton Williams will split time at first with sophomore Tanner Padgett, and senior Lorenzo Elion and Hutchinson Community College transfer Dylan Nedved will platoon at third.

Judging by Sher’s stats and the Hawkeyes’ solid opening weekend, it seems as if things could be just as smooth as they did in 2019.