In the Iowa-Iowa State game, Iowa Nice needs to make a comeback. 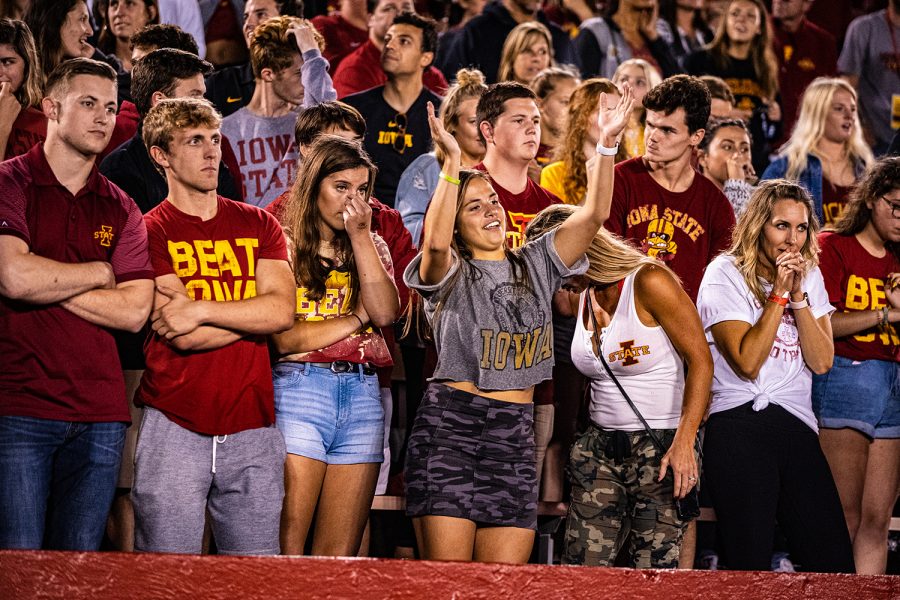 An Iowa fan celebrates a turnover on downs during a football game between Iowa and Iowa State at Jack Trice Stadium in Ames on Saturday, September 14, 2019. The Hawkeyes retained the Cy-Hawk Trophy for the fifth consecutive year, downing the Cyclones, 18-17.

University of Iowa President Bruce Harreld was optimistic in an interview with The Daily Iowan on Feb. 13 that the Iowa-Iowa State football rivalry would resume as planned this year, but made a point to highlight the need for student and fan safety.

“Clearly, we need to do a better job of keeping our band, our athletes, and our fans safe,” Harreld said.

The DI Editorial Board wrote about the Cy-Hawk disorder that occurred during the rivalry game Sept. 14. The controversy centered on allegations from Hawkeye Marching Band members that Iowa State fans had verbally and physically harassed them.

In the wake of the incident, Harreld and the Editorial Board supported the stance that student and fan safety must be assured in order for the annual event to continue. Harreld questioned in a DI interview soon after the rivalry game whether it should continue. With his most recent comments, the Board again agrees with Harreld.

The game is back on, and it appears that all parties involved with overseeing the event are aware of potential problems.

Harreld has worked with ISU President Wendy Wintersteen and their institutions’ band, athletic, and public-safety directors to make sure security and event staff are better prepared to address any potential issues. They have thought through logistics such as entrances and exits, parking, and security for the student musicians.

While the institutions have taken clear steps to address the band members’ safety, Harreld again raised the issue of fan behavior being a challenge across the country, and the Board commends his continued awareness of this root problem. He said UI and ISU officials have contemplated doing public-service comments of sorts encouraging fans to practice acceptable behavior.

“We’re actually going to challenge our fans to actually be Iowans, and to be supportive of Iowa, and to exhibit to the world Iowa behavior, what we would call ‘Iowa Nice,’ ” Harreld said. “But we also know it has an edge, and we can work on how to keep that edge away, and then let the teams just battle it out in the field.”

There are also more rudimentary measures that can be taken, as the Board wrote in September. More security staff and better enforcement of conduct rules, especially concerning alcohol, should be focused on before and after kickoff.

Given statistics showing the number of alcohol-related incidents on college gamedays, such measures to address gameday alcohol consumption are needed.

According to a 2018 Sports Illustrated report analyzing college football gameday safety, using 2017-18 data, there were a reported 74 police incidents on gamedays — 49 of which were alcohol-related incidents.

Of the six other Big Ten schools listed, Nebraska was the only one with a lower incident rate than Iowa. Iowa had a 0.158 incident rate — the number of incidents per thousand fans each gameday. ISU, a Big 12 school, has an incident rate of 0.699, reporting 243 gameday incidents — 212 of which involved alcohol.

The data show the schools reporting different levels of alcohol-related incidents, but it’s clear that steps should be taken to mitigate the disturbances and potential violence that results from gameday alcohol consumption.

SI highlighted the University of Nebraska’s partnership with local nonprofit The Bridge to care for over-intoxicated fans. “When officers transport fans to the Bridge, they are not cited; instead, the organization notes where the patient received alcohol to collect data for the police,” the publication reported. “This can explain why Nebraska has one of the top five lowest incident rates out of all 33 schools [analyzed in its 2018 report].”

Nebraska is a different school, but a unique solution and partnerships with our Iowa City community could be a promising place to look for solutions. Respectful fan behavior should be found beyond Lincoln.

Hawkeye and Cyclone fans should also be expected to behave better, “to actually be Iowans.” With more attention bound to be on the game, fans of both teams have the opportunity to exhibit the sportsmanship that last year’s game lacked.

We can all obviously be better fans and better Iowans. The game depends on it.