Speaking to a health-care summit in Coralville, Grassley said he expects that the The Prescription Drug Pricing Reduction Act of 2019 will pass by May 20. 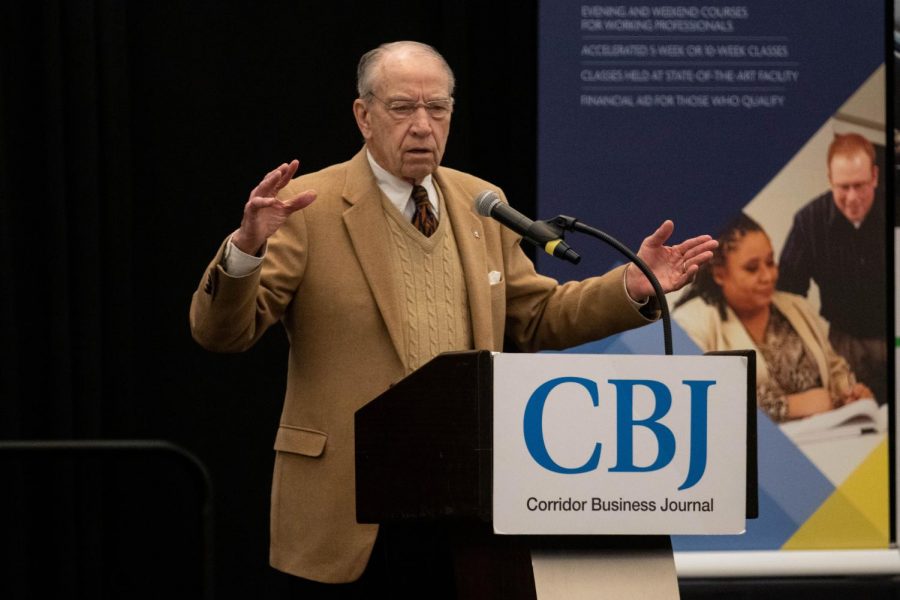 Sen. Chuck Grassley pushed his plan to lower prescription drug prices to health-care professionals in Coralville on Feb. 14, saying he expects the bipartisan bill to pass by May 20.

“The reasons that’s an important date is because right before Christmas, there were a lot of health-care programs that sunset, so they have to be extended,” Grassley said in an interview with The Daily Iowan. “Usually we’d extend them for a year or two, but we extended them just to the middle of this year so we’d have a vehicle to move prescription drugs.”

Several health-care programs are set to expire on May 22, including funding for measuring Medicare and Medicaid quality and funding for community mental health.

Grassley told the DI he has a three-pronged approach to gaining bipartisan support for the bill — negotiating with House Speaker Nancy Pelosi, gaining more Republican senate support, and getting endorsements from the President.

“I knew that the house was going to pass a different bill, so sometime sitting down with Speaker Pelosi, trying to work things out there, or with somebody she would designate for me to do it with,” Grassley said.

President Trump mentioned Grassley during the State of the Union Feb. 4. Trump said during the speech he would sign the bill immediately if it passed both chambers of congress.

Grassley said support from Trump, as well as from Vice President Mike Pence, is helpful in gaining more Republican support for the bill.

“The toughest might be Pelosi, or maybe she’ll be easier than getting more Republican co-sponsors, but I think I have to get about half of the Republican caucus to back it,” Grassley said.

In his remarks at the summit, Grassley said the bill’s provision to limit yearly drug price increases for Medicare recipients is unpopular among some Republicans.

One attendee, who volunteered for the American Cancer Society, said he was concerned about the lack of action on to provide support for Palliative Care, care for those suffering from terminal illnesses, and Hospice Centers in the Senate.

“I and other American Cancer Society Volunteers visited your office to urge your support for the Palliative Care and Hospice and Education Act. It passed the House last summer 435 to nothing … if you could explain why a bill that has that much support … can’t even get to a vote in the senate.”

Others were concerned about tax cuts preventing health-care spending.

“You and your fellow Republicans voted for massive tax cuts last year and over the course of this administration,” said one attendee. “That tax cut is being used as an excuse for difficult choices in health care.”