The Iowa women’s basketball team never got into rhythm against the Terrapins and now trail them in the Big Ten standings. 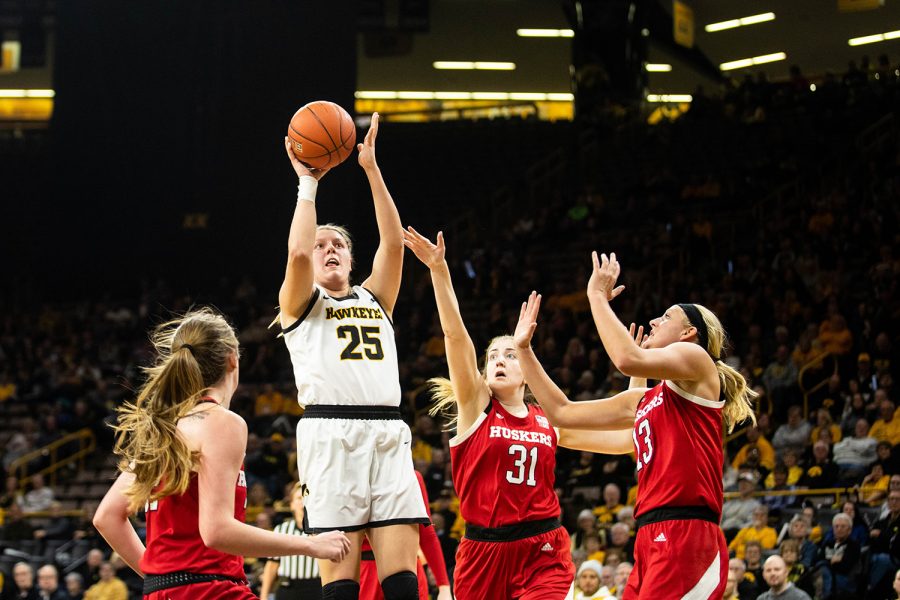 Iowa center Monika Czinano shoots during a women's basketball game between Iowa and Nebraska at Carver-Hawkeye Arena on Thursday. The Hawkeyes defeated the Cornhuskers 76-60.

There was no comeback this time around for the Hawkeyes.

College Park, Maryland, was too much for Iowa to handle, as it lost to Maryland, 93-59. The Hawkeyes were tied with the Terrapins for first in the Big Ten before Thursday’s game.

The lead was never in the Hawkeyes’ favor, and they were outplayed in every part of the game.

Turnovers were a major issue for the Hawkeyes. They had 27 compared to 14 by the Terrapins. The 27 turnovers are the most in a single game by Iowa all season.

This led to the Terrapins to have a 37-9 advantage when it came to points off turnovers. This should not be surprising, considering the Terrapins led the Big Ten in steals and forced turnovers before the game.

“Their press hurt us,” Iowa head coach Lisa Bluder said. “We are usually pretty good at breaking presses. This is one of very few times where we’ve had trouble with it, so I’m little bit surprised by it.”

It was bad for the Hawkeyes in the second quarter, as they were outscored, 23-9.

Senior guard Kathleen Doyle, the Hawkeyes’ leading scorer, scored below her season average of 18.7 points per game, only posting 10 points on Thursday. It ended up being sophomore center Monika Czinano as the leading scorer for the Hawkeyes with 15 points.

Bluder said that they tried to get Doyle the ball, but the Terrapins’ defense was so good that they just couldn’t get her the ball due to their pressure.

Czinano reaped praise from her head coach post game after shooting 7-of-7 from the field against Maryland. She also led the Hawkeyes with seven rebounds.

With the blowout, it provided the Hawkeyes the chance to play some of their reserves, such as freshmen Megan Meyer and Kate Martin and junior guard Zion Sanders.

“It was nice to go in and see Megan get a three,” Bluder said. “Zion spotted us some good minutes, as well.”

The Hawkeyes are now 20-5 overall and 11-3 in the Big Ten. They will have a chance to put this game behind them when they play Wisconsin at 2 p.m. Sunday in Carver-Hawkeye Arena, where they will go for their 34th consecutive home win.