Pat Lugo is not the most explosive wrestler in Iowa's lineup, but he pushes the Hawkeyes ahead with his leadership. 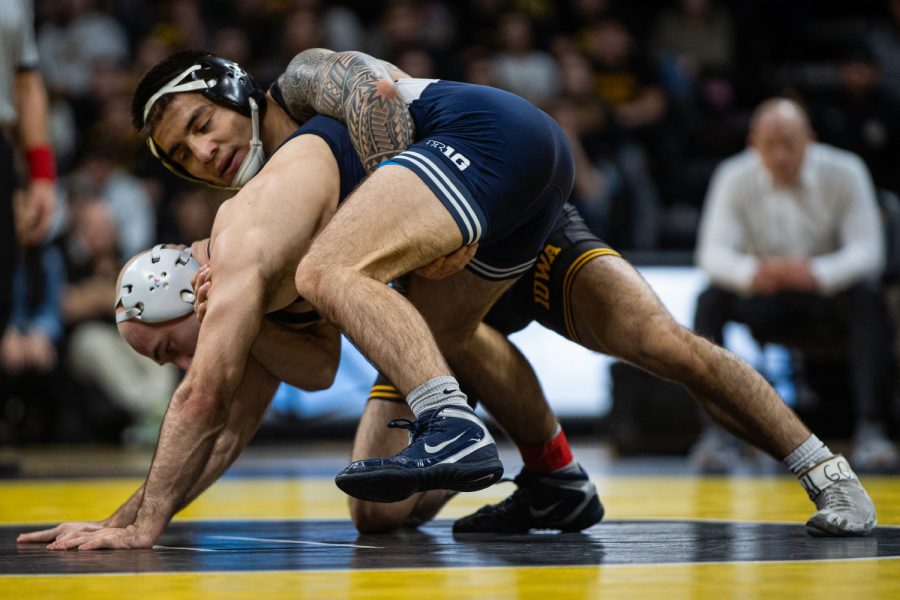 Iowa’s 149-pound Pat Lugo wrestles Penn State’s Jarod Verkleeren during a wrestling dual meet between No. 1 Iowa and No. 2 Penn State at Carver-Hawkeye Arena on 2020. No. 1 Lugo defeated Verkleeren by decision, 6-1, and the Hawkeyes defeated the Nittany Lions, 19-17.

In a lineup that features the likes of reigning national champion Spencer Lee, No. 1 Michael Kemerer, and No. 3 Tony Cassioppi, All-American Pat Lugo is often overlooked.

His track record suggests that shouldn’t be the case.

From Florida, Lugo moved to Edinboro, Pennsylvania, to attend Edinboro college. He went 63-8 across two years of wrestling before deciding to transfer to Iowa.

“There [wasn’t] just one main thing [that made me choose to transfer to Iowa],” Lugo said. “There was a lot of things building up to one big decision in my life. There were just a couple things here and there, like coaching, teammates, the tradition, the culture, the energy level in the room, and stuff like that. All that made it easier for me to transfer.”

Iowa head coach Tom Brands believes Lugo had nothing against Edinboro when he transferred, and that he was naturally attracted to Iowa.

“I can’t speak for [Lugo],” Brands said. “I know that he enjoyed his time in Edinboro, and there was no ill will there. It was more like, ‘What’s the future looking like here?’ He’s fit in very well here, and we look at him as a leader.”

Lugo did not land in the Hawkeyes’ lineup immediately following his decision to transfer. He sat behind All-American Brandon Sorenson.

“I knew I had a redshirt to burn,” Lugo said. “I knew he had one more year of eligibility. So, the plan was for him to finish that year and for me to redshirt while he’s doing his senior year, then for me to step in my last two years.”

The accomplished senior 149-pounder mentored Lugo so he was ready when his time to enter the lineup finally came.

“[Sorenson] helped me a lot. He’s still helping me today, just telling me I need to attack,” Lugo said. “I’ve got those attacks, I just need to use them. I can’t hesitate. By me watching him my redshirt year, the way he prepared for matches, the way he cooled down after a match, helped me develop as a wrestler.”

The Iowa wrestling program announced Dec. 3, 2019, that Sorenson had been diagnosed with acute lymphoblastic leukemia.

Lugo and his teammates have honored their former teammate all season.

“[Sorenson] doesn’t just inspire me, but my teammates, too,” Lugo said. “The Sorenson bandana [we’re wearing this season] is a symbol of us coming together as a family and working hard.”

Lugo went 23-9 and earned All-America honors during his first season as a regular in Iowa’s lineup last year.

This year, Lugo is 16-1 overall and ranked second nationally at 149-pounds. The senior has eight wins over ranked foes this season.

Lugo will have a chance to add another win over a ranked opponent to his resume Saturday against Minnesota. He will likely face No. 7 Brayton Lee.