The Hawkeyes return some important pieces this season, which will be important as they attempt to make a run. 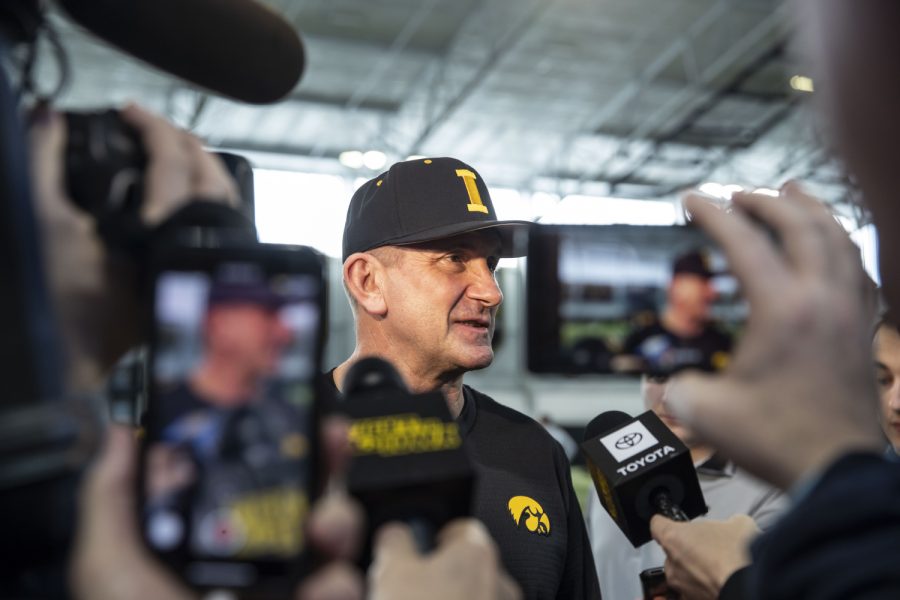 Head Coach Rick Heller speaks to members of the press during baseball media day in the UI recreation building on Thursday, Feb. 6, 2020.

Iowa baseball watched magic unfold in the College World Series last season, but it had to do so from its couch.

The Hawkeyes observed Big Ten powerhouse Michigan win a game of the championship series in Omaha before second-ranked Vanderbilt picked up two victories in a row to take the trophy to Nashville.

Despite coming up a game short, the Wolverines showed what a northern team can do. Now, Iowa wants to see for itself.

It’ll take the first step when it faces Kent State, Saint Joseph’s, and Pittsburgh in the Snowbird Baseball Classic in Port Charlotte, Florida, from Friday through Feb. 16.

“I think what [Michigan] did was it validated what all of us already knew,” Iowa head coach Rick Heller said. “It really sent a message, I think, nationally where our league is.”

Picked to finish fifth in the Big Ten by Perfect Game and Baseball America and seventh by D1Baseball, the Hawkeyes are coming off a 31-24 season with 10 wins over ranked opponents.

Only seniors Chris Whelan, Mitchell Boe, and Tanner Wetrich are gone from the field, while Cole McDonald was the only starting pitcher to leave the program, getting selected by the Houston Astros in the 15th round of the MLB Draft.

Izaya Fullard, who led the Hawkeyes with a .307 average last season, will give Iowa a boost for the second season in a row. Ben Norman also returns after pacing Iowa with 34 RBIs and 14 stolen bases.

While losing last year’s seniors won’t be easy to overcome, the Hawkeyes possess the pieces to make it work.

“I think it’s pretty easy [to put the work in] when we have the guys that we have,” pitcher Drew Irvine said. “It’s just easy surrounding ourselves with such good guys. The coaches do a great job recruiting guys who want to work hard, so it’s easy day in and day out to push each other and work toward our goal at the end of the year, and that’s being at the College World Series.”

The Hawkeyes will also be presented with the chance to pick up some solid wins early in the season.

Iowa’s pitching could pose a problem for those programs.

With Jack Dreyer and Grant Judkins — who both posted an ERA under 3.00 —returning to the starting rotation, the Hawkeyes could cause problems for teams all season.

Throw in Grant Leonard, who went 14-of-14 on save opportunities to set a new single-season school record last season, and things get even more dangerous as the game progresses.