The Iowa men’s basketball team suffered a tough loss against Indiana, but the greater concern surrounds CJ Fredrick’s status after he left the game with an injury. 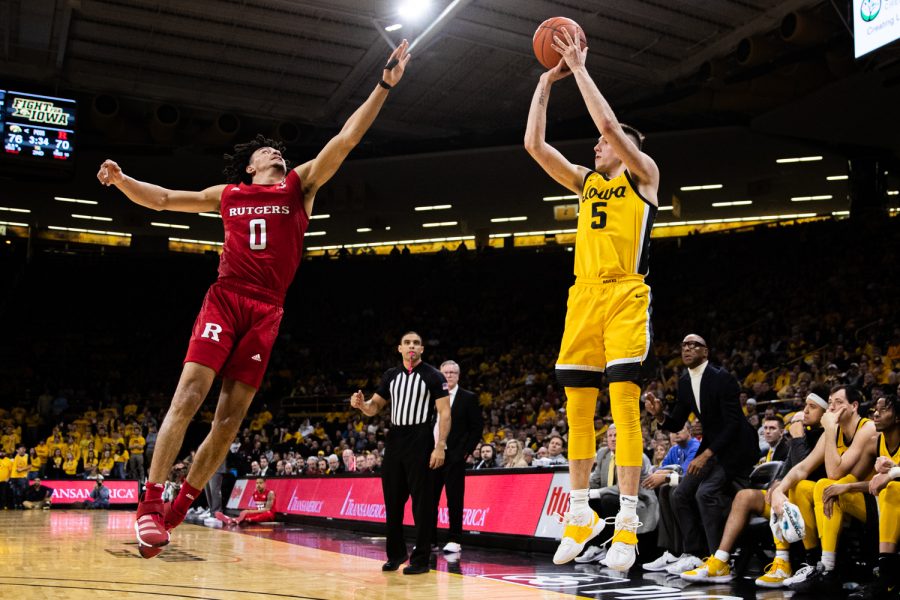 Iowa guard CJ Fredrick takes a shot during a men’s basketball game between Iowa and Rutgers at Carver-Hawkeye Arena on Wednesday, Jan. 22, 2020. The Hawkeyes defeated the Scarlet Knights, 85-80.

Things went from bad, to worse, to absolutely terrible for the Iowa men’s basketball team Thursday night against Indiana.

Iowa got out to an early lead on the road, only for the Hoosiers to take over the game and enter the halftime break with a double-digit lead. The Hawkeyes eventually fell to Indiana, 89-77.

That was the least of Iowa’s issues.

Late in the first half, Iowa guard CJ Fredrick caught a pass on the right sideline, immediately committed a turnover, and went down in pain. The redshirt freshman stayed on the floor for an extended period of time before being helped off.

Fredrick didn’t put any weight on his right leg. At halftime, Iowa announced Fredrick would not return to the game due to an ankle injury.

Iowa head coach Fran McCaffery announced post game that Fredrick suffered a sprained right ankle, the severity of which is unclear at this time.

After Fredrick left the game, redshirt sophomore Austin Ash was inserted into the lineup in his place.

Depending on Fredrick’s availability moving forward, Ash and other Hawkeyes will have to carry the load created by his absence.

“We just need other guys to step up,” McCaffery said. “Connor [McCaffery] has to step up. [Iowa guards Bakari Evelyn and Joe Toussaint] need to step up. I thought Ash and [Iowa forward Riley Till] played about as well as we could have expected tonight. I’m proud of those guys.”

Fredrick is the third Iowa starter to go down with an injury this season. Forward Jack Nunge is out for the year with a torn ACL, while guard Jordan Bohannon underwent season-ending surgery on his hip in December.

Patrick McCaffery has also missed most of the 2019-20 season with health issues related to his previous battle with cancer, and Cordell Pemsl has been suspended twice, causing him to miss three games.

Going into Thursday night’s game, Fredrick had appeared in 21 games for the Hawkeyes this season. He is third on the team with 11.2 points per game and had emerged as one of the team’s best perimeter defenders.

Once trailing by 20 points, the Hawkeyes pulled the game within 10 points at the six-minute mark of the second half.

The junior center scored over 20 points for the 10th straight game and registered his fifth 30-point game of the season.

Just when it seemed there was nothing Garza could do to make a better case for Big Ten Player of the Year, the junior center scored 38 points on 14-of-22 shooting. He also hauled in eight rebounds and blocked four shots.

“He was doing what we needed him to do,” McCaffery said. “We’re going to keep going to him. He didn’t get a lot of help. [Iowa sophomore Joe Wieskamp] did a really good job of attacking the rim in the second half. Obviously it hurt losing CJ. He’s another guy who gives us offense. We needed some other guys to step up and help [Garza].”

Garza’s 38 points are the third highest point total scored by a Hawkeye in the McCaffery era. It’s the second highest scoring output for Garza this season, behind only his 44-point outburst Dec. 6 against Michigan.

The win for Indiana snapped the team’s four-game losing streak. The Hoosiers improve to 13-3 on their home court this season.