By the numbers: The figures that defined the Iowa caucuses

From advertising dollars to amount of field offices, there were more numbers that set the stage for the race in Iowa beyond state delegate counts. 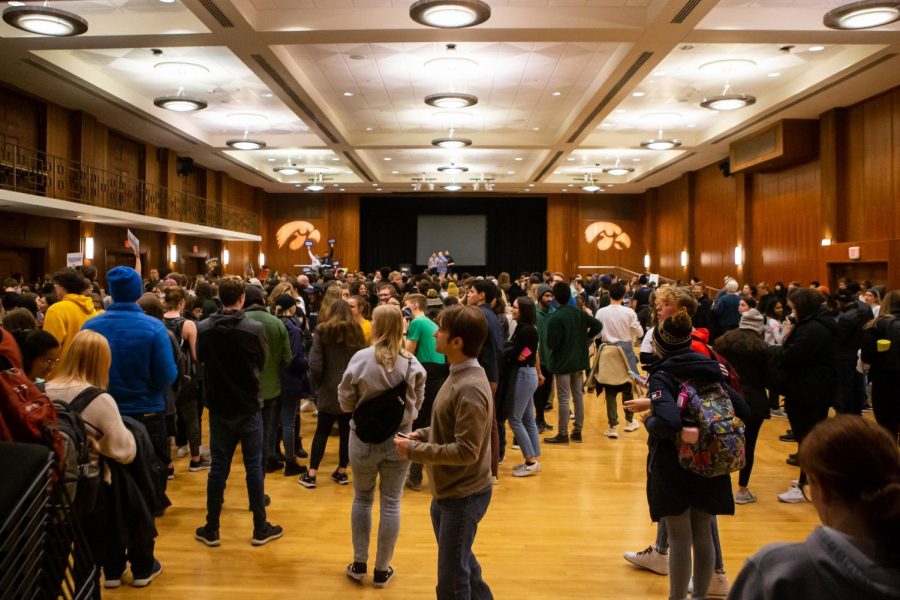 University of Iowa students caucus at the Iowa Memorial Union on Monday February 3, 2020.

Before absent results from the Iowa caucuses caught national attention, candidates traveled across the state, racked up hundreds of campaign stops, and shoveled millions of dollars into local advertising.

The Daily Iowan looked back at the numbers that defined the race for candidates in the lead up to the Iowa caucuses.

As Iowa’s first-in-the-nation caucus status comes under fire, the Hawkeye State stands to lose not just its political prominence, but also economic revenue. In December, ahead of the caucuses, Catch Des Moines, the Greater Des Moines Convention and Visitors Bureau, predicted the 2020 Iowa caucuses would generate $11.3 million for the city in the week leading up to the caucus.
Winners and losers — by the numbers
With 100 percent of precincts now reporting results, former South Bend, Indiana Mayor Pete Buttigieg emerged with a slight lead over Sen. Bernie Sanders, I-Vt. Buttigieg ended up with 564.302 state delegate equivalents to Sanders 561.528. Buttigieg took 14 national delegates, and Sanders had 11.

However, Sanders led Buttigieg in the raw body count support in both the first and final alignments.

Turnout in the Democratic caucuses was around 176,000, according to the Associated Press.

Data from Edison Research show 37 percent of caucusgoers were first-time attendees, down from 44 percent in 2016 and 57 percent in 2008.

Rocky Greenslade, a high-school senior in Des Moines, volunteered for the Buttigieg campaign and caucused for the first time at the Des Moines Precinct 62 caucus site.

“I just turned 18 in September, so I’m really excited that I get to caucus this year and vote, too,” Greenslade said on caucus night. “I did vote for our city council in the community, which was really fun. It’ll be my second time voting, but my first time voting for president.”

State of Iowa polling averages from FiveThirtyEight over the final weeks leading up to the Iowa caucuses did not entirely predict the outcome of the caucuses. On Jan. 31, Buttigieg had a polling average of 15.5 percent — but Buttigieg ended up with 26.2 percent of state delegate equivalents.

Alison Gaynor, 66, said she ruled out Buttigieg among moderate candidates because of his inexperience.

“I’m caucusing for [Klobuchar] but Biden would be my second choice, and truthfully, I’d like to see a Biden-Klobuchar ticket,” Gaynor said.
Iowa stops
With as many as 25 candidates in the race at one time, Oval Office hopefuls traversed the Hawkeye State, stopping in diners, community centers, and local event centers, bringing in extra publicity and dollars into local businesses.

Former Rep. John Delaney, of Maryland, who dropped out of the race Jan. 31 a few days before the caucuses, led the pack of candidates with 269 stops in the Hawkeye state, according to the Des Moines Register candidate tracker.

Buttigieg made a total of 182 stops in Iowa through Feb. 2, according to the campaign, and won the largest amount of rural counties. Sanders made 133 stops.

Although there was no shortage of candidate visits in Iowa in the months leading up to the caucuses, college students said finding time to attend campaign rallies and town halls was difficult.

Alec Bequette, 19, a first-year student at Drake University, said he did not have a chance to see any candidates in person because of his busy schedule.

Bequette said he made his decision to caucus for Buttigieg by reading candidates websites.

“I did not [see candidates] — I really wanted to, but they would come and I would just forget about it,” Bequette said.
Advertising

Campaigns flooded Iowa with political advertisements during this caucus cycle, with candidates spending an estimated $49 million combined on television-ad buys in Iowa, according to FiveThirtyEight.

Businessman Tom Steyer spent significantly more on advertising than his Democratic counterparts, with an estimated $12 million investment, accounting for around 24 percent of ad spending in Iowa.

Behind Steyer, Buttigieg spent the second most on TV advertising, with $6.4 million going to Iowa airwaves.

Some candidates took in millions of dollars in donations throughout the campaign cycle, in a race where candidates such as Sens. Cory Booker of New Jersey and Kamala Harris of California dropped out due to a lack of funding.

Sanders fundraised the most money overall, receiving $73.8 million, according to OpenSecrets.

Both Sanders and Warren made refusing to take money from corporations a central part of their campaigns. According to data from OpenSecrets, around 58 percent of Sanders’ fundraising contributions came from individual donors giving under $200, and 53 percent of Warren’s contributions also came from small donations.

Steyer and Delaney contributed large amounts of personal money to their own campaigns, with Steyer contributing $47.6 million to his campaign, and Delaney spending $9.5 million.

Fourth-year UI student Jacob Almanza, a Sanders supporter, said he would have liked to donate to candidates if it was financially feasible for him as a student.

“I probably would [donate], if it was a campaign that I believed in and had the funds for — but I don’t have the funds for it,” he said at a meet-and-greet with Queer Eye star Jonathan Van Ness Jan. 26.
Staff and field offices

Candidates set up shop in field offices across the state, manned by staff and volunteers.

Buttigieg had the most Iowa field offices, at 33, according to the campaign. Biden was second, with 27 offices.

While campaigns kept track of staffers, many campaigns said Iowa volunteers numbered in the thousands, but there was no official record of volunteers.

The amount of ground-game from campaigns paid off during the caucuses, with Buttigieg, Sanders, and Warren leading the ticket.

Emily Elliot, 40, a precinct leader for Elizabeth Warren at Des Moines Precinct 62, said she has been volunteering for candidates in Iowa for several years.

“I’ve been pretty decided for the last few months, I’ve been volunteering with the campaign and I’m a precinct leader,” Elliot said. “I couldn’t not volunteer for the campaign I’m supporting. I was a precinct captain for Obama in 2008 and 2012 — being involved is important.”