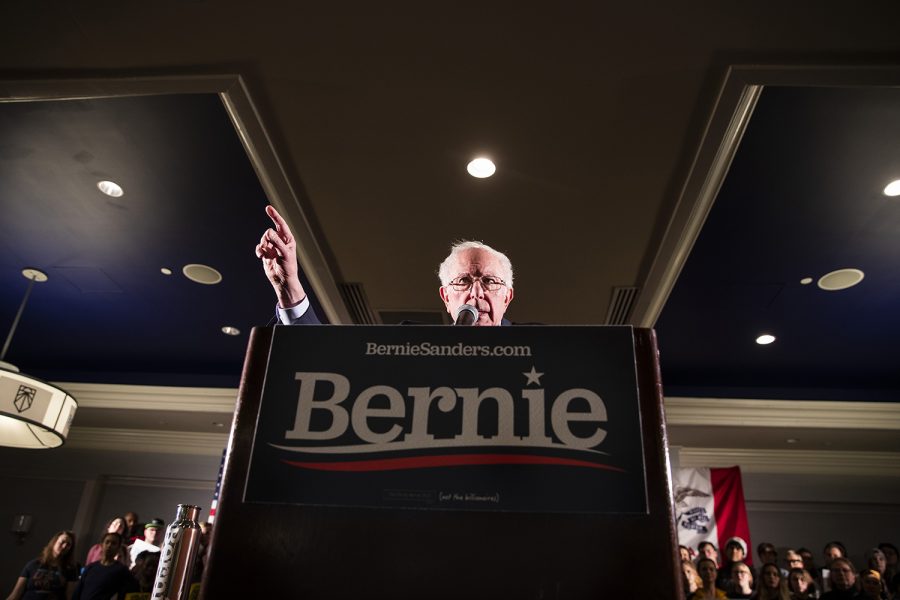 Sen. Bernie Sanders, I-.Vt., speaks during the Iowa City Climate Rally at the Graduate hotel on Jan. 12. Sanders discussed his climate policies, the impact of climate change, the Green New Deal, and the dangers of climate inaction in the government.

Results from the country’s first-in-the-nation primaries on Tuesday night reflected results out of Iowa with Sen. Bernie Sanders narrowly leading former Mayor Pete Buttigieg in vote counts, despite a media storm around delayed Iowa caucus results and errors in reporting.

There were several rule changes to the Iowa caucusing process this year, which resulted in inconsistencies in reporting between final results posted by the party and results from precincts’ tally sheets. Much of the news out of Iowa has surrounded the Iowa Democratic Party and its troubles reporting accurate totals, rather than the performances of the candidates.

Official results from Iowa’s Feb. 3 caucuses were not finalized until several days later, and the Buttigieg and Sanders campaigns requested a recanvass of results for a total of 143 precincts between the two campaigns on Monday. The Iowa Democratic Party said it would not change math on tally sheets even if it was incorrect to ensure the integrity of the process.

Unlike Iowa, whose first-in-the-nation caucuses are run by the state Democratic Party and an army of volunteers, state election officials run the New Hampshire primary. In addition, the state didn’t rely on new technologies, like a malfunctioning results-reporting app in Iowa that prevented many precinct chairs from sending results to state headquarters. In an interview with Politico, state elections officials said that even though a small part of their system relies on computers, they were protected against sabotage and ready to deal with potential glitches.

Nancy West, long-time journalist and founder of nonprofit journalism organization InDepthNH, said that like the culture around the Iowa caucuses, people in New Hampshire are also very well-informed voters, and take their early-state status seriously.

“This whole notion that New Hampshire and Iowa are not representative of the country and shouldn’t have this power — however, what those pundits don’t take into consideration is how well this process is carried out in New Hampshire,” West said.

The conflict in this year’s caucuses sparked questions from critics as to whether or not Iowa should keep its first-in-the-nation caucus status. In a Feb. 4 interview with University of Iowa political-science Professor Frederick Boehmke, he said the recent reporting errors and media coverage added new energy to calls to change the process.

“I think it places Iowa’s status as first in the nation in further jeopardy,” Boehmke said. “It was already under pressure after 2016, and before that.”

In 2016, some Democrats cited biased reporting and lack of transparency in the close margin between Sanders and Hillary Clinton. While the Iowa Democratic Party tried to increase transparency this year by releasing more result metrics, accessibility still remained an issue for many Iowans.

West said that while it was surprising to many people that Buttigieg received the highest delegate count in Iowa, she could’ve seen the Tuesday night primary shaking out a few different ways because of the sheer number of Democrats in the race.

“It’s a good place to float all these ideas and mission statements and, plans and how they separate from themselves,” West said.