While Democratic caucus turnout across the state was lower than expected, Johnson County saw a record turnout at the caucuses, driven largely by high numbers at on-campus locations. 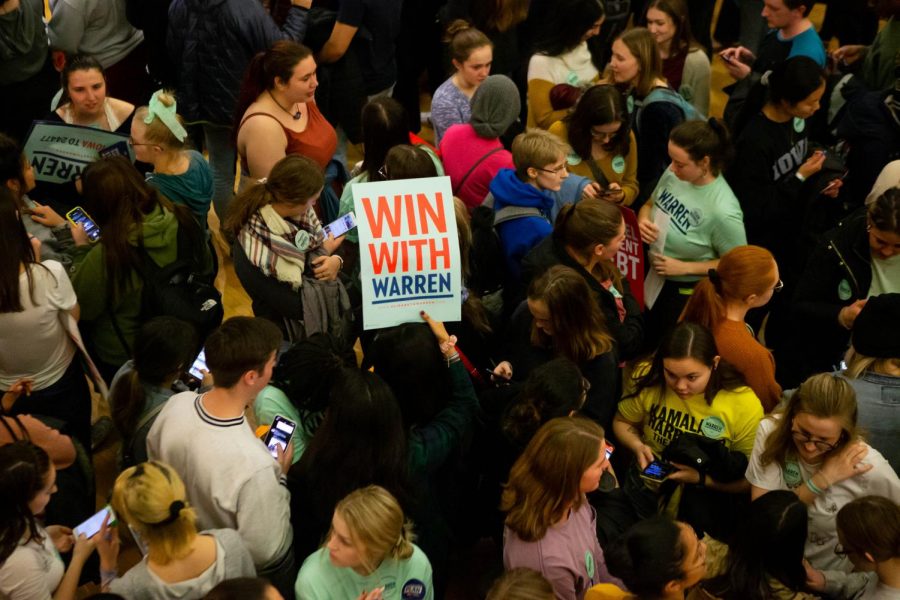 A sign for Sen. Elizabeth Warren, D-Mass. is seen during a caucus at the Iowa Memorial Union on Feb. 3.

Amid lower-than-expected Democratic caucus turnout across the state this year, Iowa’s bluest county set a caucus record, partially due to a record proportion of young people participating.

While Democratic caucus turnout across the state was far below where it was in 2008, Johnson County set a record with 21,437 people showing up to caucus, according to numbers provided to The Daily Iowan by Johnson County organizer John Deeth.

The turnout change is indicative of party trends in Iowa, Deeth said.

“Part of what’s happening is as the rest of the state is getting redder, Johnson County is getting bluer,” he said.

Increased turnout among young people may have contributed to the higher numbers in Johnson County. According to a report from CIRCLE at Tufts University, people aged 17-29 made up nearly a quarter of all caucusgoers in 2020, the highest proportion recorded in a Democratic caucus.

David Redlawsk, the University of Delaware Political Science and International Relations Department chair who studies the Iowa caucuses, said high turnout among young people was partially driven by Bernie Sanders. Sanders drew 48 percent of support among people under 30 statewide, according to CIRCLE.

Turnout rose significantly in precincts on campus, with Iowa City Precinct 11 at the Voxman Music Building increasing by 146 people from 2016, and precinct 5 at the Iowa Memorial Union increasing by 129. Sanders won in both precincts.

“To the extent that Sanders generated some enthusiasm to get people out, he clearly has a significant support among the youngest caucusgoers,” Redlawsk said. “To the extent young people came out, a lot of them were clearly driven by support for Sanders.”

Roof said students on campus were interested in getting involved in politics, but a lot of them weren’t sure how the caucus process worked and wanted to learn more.

“I think a lot of young people are sick of sharing posts on Facebook and Twitter and not feeling like they can do anything about it,” she said. “And so I think people are energized to turn out because they feel sick of feeling like nothing that they do matters.”

While people under 30 made up 24 percent of statewide caucusgoers, turnout didn’t increase in every area with a high concentration of young people. Poweshiek County, another heavily Democratic county and the home of Grinnell College, had a lower turnout than in 2016, Grinnell College political-science professor Barbara Trish said.

“Chances are, explaining turnout, like many political phenomena, is a multivariate explanation,” she said. “All sorts of things are in the mix, some would be unique to a particular location, others would apply more generally.”