The Hawkeyes earned a win in their home opener while posting their second-best point total of the season. 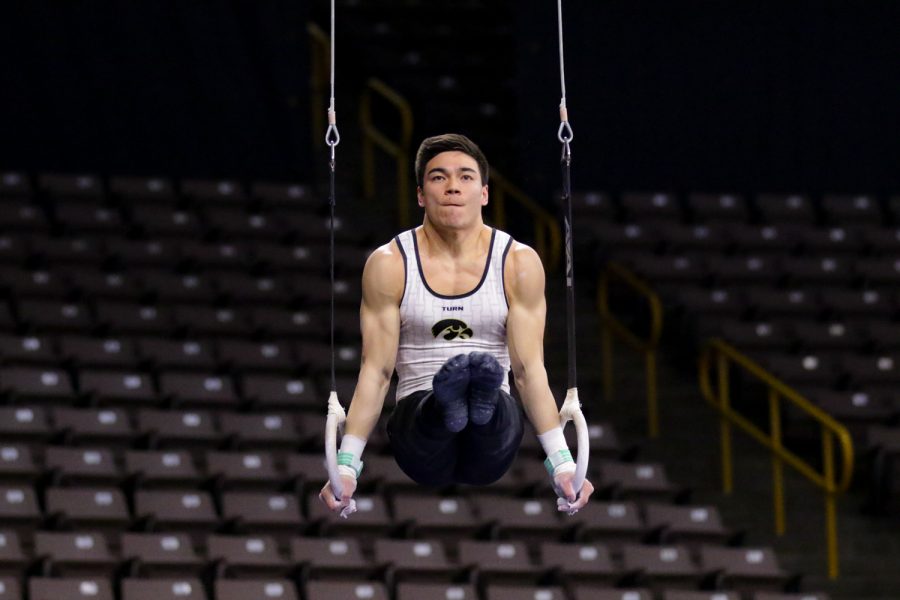 Iowa gymnast Brandon Wong performs on the rings during a gymnastics meet against Minnesota and Illinois-Chicago on Saturday, Feb 2, 2019. The Golden Gophers won the meet with a total score of 406.400 with the Hawkeyes scoring 401.600 and the Flames scoring 355.750.

As the Hawkeyes’ best outperformed their opponents on vault — 70.850 to Minnesota’s 70.050 —senior Brandon Wong, who performed a career-best of 14.100 on vault, notes that wins at home always feel extra special.

“One of our goals this year is to be undefeated at home,” Wong said. “So, we really put that on the guys to make sure we step up and defend our home and that we’re not losing here. This win feels really good. Coming into a home crowd was really cool. Everyone was excited, and we kept the energy up. I thought we did a good job.”

Along with the win at home, the Hawkeyes earned their first Big Ten victory of the season over No. 4 Minnesota.

“Any Big Ten win is fantastic, even at this point in the season,” Iowa head coach JD Reive said. “There’s a lot of things to iron out on both sides. Being at home, the first meet and the freshman getting to experience coming out of the tunnel their first time and getting the win at home is just fantastic. It’s a great amount of motivation going into next week.”

Another area of strength for the Hawkeyes against the Golden Gophers was on floor. Iowa tallied a team score of 67.750, with junior Bennet Huang leading the team with an individual 14.000, winning the all-around in the three-team meet at 81.050, and completing a season-best on the high bar.

On Saturday, Iowa moves onto the number-one ranked Oklahoma Sooners, a team who averages 413.880 this season. Coach Reive sees the opportunity for strong competition and knows how to prepare his team.

“We’re going into Oklahoma, which is going to be fairly stiff competition,” Reive said. “The game is to continue to get better week-to-week, practice-to-practice, weekend-to-weekend and make sure that the meets continue to rise in score.

“The stuff that we’re looking at and focusing on is showing up out on the floor and in front of the judges. And that we are conscious with intent on what we are doing out there. We saw a lot of that tonight, but there’s still plenty that we have to work on.”

Competition between the Hawkeyes and Sooners begins at 5 p.m. Feb. 8. Iowa is back in action again on Feb. 20-21 when the Hawkeyes travel to Las Vegas for the Winter Cup.