The afternoon before the Iowa caucuses, presidential hopeful Andrew Yang made a stop in Iowa City. 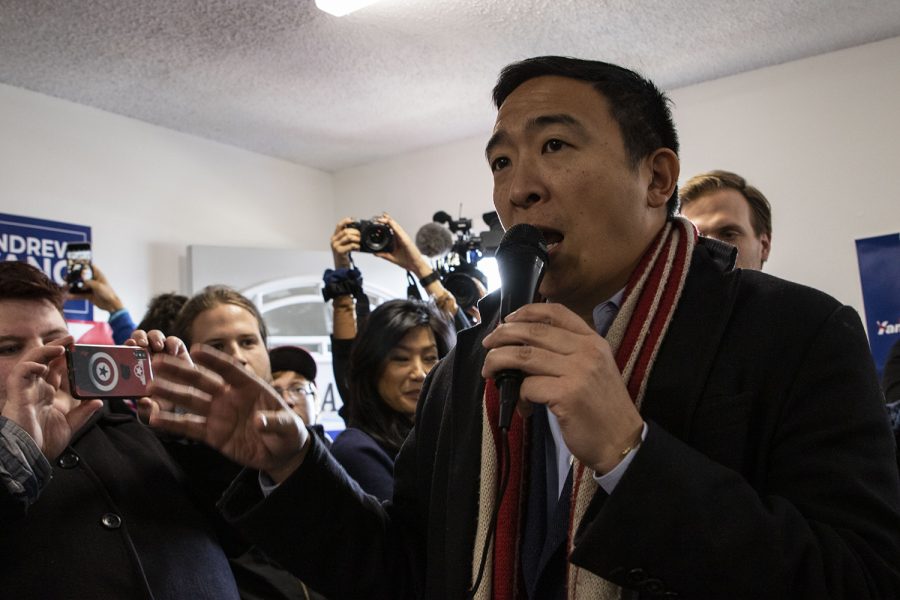 Democratic candidate Andrew Yang addresses fans during a meet and greet in his Iowa City campaign office on Feb. 3. Yang greeted fans and cheered them on for the caucuses later tonight.

A crowd of around 75 gathered at the Iowa City office of Democratic presidential-nomination candidate Andrew Yang as he and his wife Evelyn spoke on Monday, the morning of Iowa’s first-in-the-nation caucuses.

“My phone has been blowing up all morning with messages from people all over the country today texting me saying, ‘Good luck today, Andrew,’ ” Yang told the crowd. “You know what I say to them? Stop texting me and start texting someone in the state of Iowa.”

The Iowa City stop follows a morning stop in Grinnell, Iowa. Supporters gathered to the walls of the office in hopes of seeing the presidential hopeful.

Howard Yang, an organizer in Orange County, California, said he believes that California doesn’t matter without an “awesome showing” in Iowa.

“A lot of us come out here because this candidate has inspired us and works hard for his vision,” Howard Yang said. “This is the Super Bowl for us — the country is on the line, the stakes are high.”

Related: Andrew Yang talks education with students at the IMU

Among the supporters, a crowd of high schoolers from Waubonsie Valley High School in Aurora, Illinois, were present to learn about the Iowa caucuses and hear from candidates. Anvita Agraval, a high-school junior, was among the crowd to show her support for the presidential hopeful. Although Agraval will not be old enough to vote come Nov. 3, she still is interested in the caucusing process.

“A lot of times, we feel underrepresented as the youth, no matter what we do, we will make a change,” Agraval said. “This is a chance to be upfront and to see the real action of what goes on.”

Andrew Yang encouraged his crowd of supporters to talk to potential caucusgoers before the evening’s caucuses, urging them to make the country listen and share the vision.

“Iowa City, I think we’re going to win this thing,” he said.