From start to finish, the cast and crew of Hit The Wall took great care to ensure the story of the Stonewall Riots was told right. 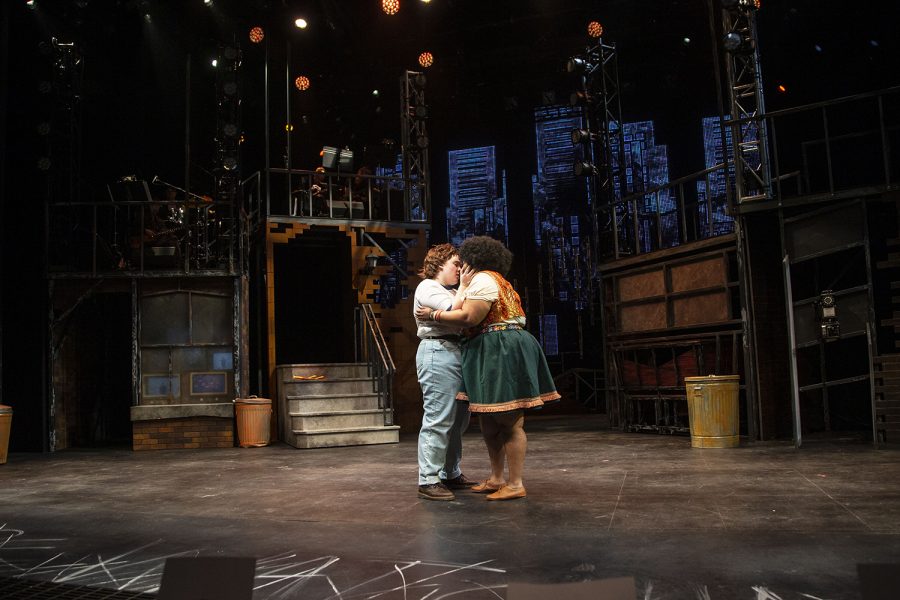 Hannah Frame and Britny Horton kiss during the Hit the Wall dress rehearsal in the Theater Building on Tuesday, Jan. 28, 2020. Hit the Wall depicted the violence of Stonewall riots.

After a psychedelic rock performance from the show’s onstage band, Hit The Wall opened with two of the actors in a documentary-style interview, complete with a screen that broadcasted the interviewee’s Stonewall testimony to the audience.

Although the rest of the show was performed theatrically, framing the opening scene as a documentary served as more than just a hook for the audience. Hit The Wall is a retelling of a true story, its characters influenced by real people who put their lives on the line during the Stonewall riots that broke out in the summer of 1969.

The cast and crew brought the reality of Stonewall to the stage through a combination of heartfelt acting and excellent lighting and sound design that enhanced the show’s most powerful moments. Although improvements were in order for the believability of the fight choreography in several key scenes, the performances by Akeem Celestine as drag queen Carson and Hannah Frame as the young lesbian Peg were no less heartbreaking and vulnerable as both fought full-force for the rights of the LGBTQ community.

Characters such as outspoken and determined feminist Roberta, played powerfully by Britny Horton, and perfectly in-sync Tano and Mika, played expertly and hilariously by Brandon Treviño and Steven Willis added perfectly timed energy to the show. Every minute the audience could expect something new and captivating, each actor owned the stage proudly.

Every character was played authentically and with care, a refreshing approach to LGBTQ characters who are too often played as stereotypes, or in a way that divorces them from the LGBTQ community to avoid being perceived as a stereotype. While many ensemble characters in Ike Holter’s play are, even by name, archetypes, characters like Peter Noll’s “Newbie” and Kyler Johnson’s “A-Gay” were played with honesty, raw energy, and a newness that made them anything but background characters.

Their ability to represent ‘60s LGBTQ culture while never letting the audience forget that their characters are so much more than clichés was instrumental to the show’s success.

The heart of the show came from the characters’ relationships to one another. The Stonewall riots are usually portrayed in historical recounts as angry activists taking a stand. While this is true, and is also present in the show, people rarely get to see emotions other than anger tied to Stonewall. Seeing the characters care for each other humanized them, and reminded the audience that anyone has the potential to take a stand.

While I was very impressed with the cast, there’s no denying that the crew played a monumental role in making the show memorable.

The lighting effects leading up to and during the riots could shift the audience’s emotions with the change of color or effect. A stage washed dimly in thick purples and greens perfectly portrayed the interior of the Stonewall Inn and dark alleyways behind, while the riot scene was spotlighted in moments of bright red to highlight the raw violence effectively, making for some unforgettable visual moments.

The set and costumes went a long way to establish the show’s time period, season, and location. More than that, they gave the audience an idea of what kind of people they were about to see portrayed and what kind of circumstances those people were in without having to say a word.

Fashion has played a significant role in the LGBTQ community for decades. For many gay men, lesbians, and drag queens alike, fashion was integral to their self-expression and helped them identify other members of their community. The script itself made note of this when two of the characters, Mika and Tano, watch people pass by their stoop and make a game of determining if they’re “funny or serious” (gay or straight, respectively).

The stoop itself was missing several bricks and looked a bit rundown. Such scenic detail gave the audience the impression that many of the rioters in the Stonewall neighborhood were poor, the reality of many openly LGBTQ individuals at the time.

Clearly, the cast and crew put a lot of thought into the decisions they made for Hit The Wall, and it paid off. It’s no surprise that the opening night performance was sold out.

Josie Fischels contributed to this review.