Gina Chavez gives a lively performance for parents and children 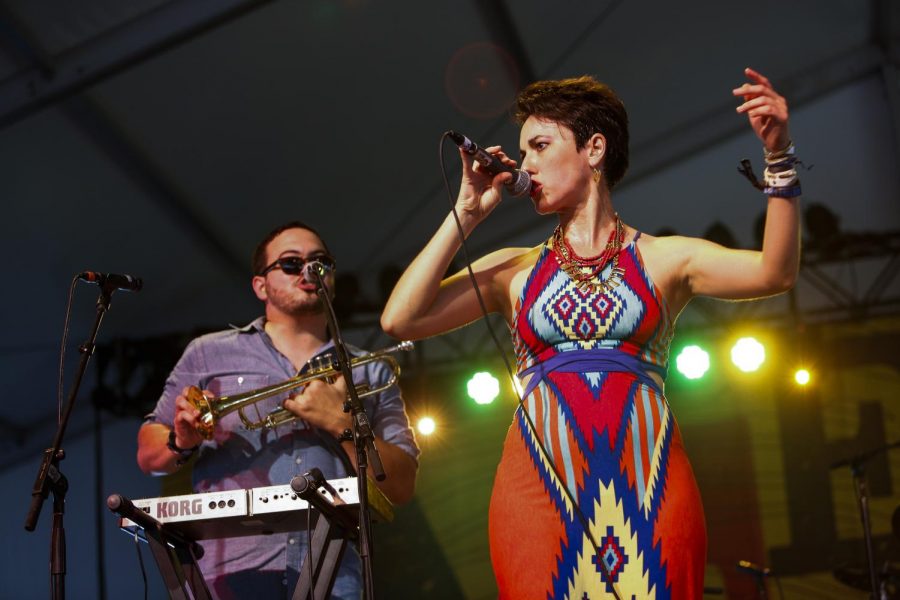 Tens of little inflatable ball-like seats sat before the stage that children immediately took to, bouncing side to side, while attentive parents watched them in some of the rows of chairs and tables behind them.

The room glowed purple and was speckled with white star projections above the stage as the director of Hancher, Chuck Swanson, invited kids to take advantage of this time, dancing and doing anything to make the afternoon their own.

Gina Chavez and her crew then took the stage, and Strauss Hall filled with applause from both children and adults, or “the big kids,” as she and her band called them. One excited child’s hand shot up straight away, ready to ask questions, but was encouraged to wait a little while longer to get through the introductions.

Chavez explained the band’s origins in Austin, Texas, remarking on how cold the Iowan winter was. She said visiting Iowa gave her the most snow she had ever seen within a mere weekend. She continued to ask about the amount of Spanish the room knew, teaching a few short phrases to the children like hola and mucho male.

After her introduction, Chavez launched into her first song, “Thousands of Miles,” which conveyed a bittersweet  message of homesickness. A groove style of music swept the crowd into the English introduction of the song, and then switched between Spanish and English lyrics starting in each following chorus.

Clapping was sprinkled in and out throughout the show, only stopping entirely for the trumpet solo, which was just as impressive as it was funny. Occasional strange sounds blurted from the trumpet, causing the children to laugh.

As the song came to an end, Chavez invited the audience to take a journey through song to Central America. With shouts of readiness, Chavez spoke about her time teaching in El Salvador and the Central and South American ukulele-like instrument, the charango, that she played for the song.

The song, sung entirely in Spanish, was about not giving up. Chavez instructed the audience to shout the word “dale,” meaning “do it,” when the time came. With upbeat and fun melodies, some of the children danced along right next to the stage and began to do the Macarena during the song.

The next song was a crowd favorite for an obvious reason: it was about ice cream. Everyone shouted out their favorite ice cream flavor before the song began.

The audience shouted,“Give me some ice cream,” after every few lines as the song about a hot Texas day played.

Before continuing on with the music, the trumpet player, Mr. Michael, invited the children to play a quick game. First, the kids moved their chairs — or “sparkly donuts” as they were now called — to the front, and a game of following directions began.

Clapping and hand sounds learned in this game became the basis for the next song about Argentina, where Chavez studied abroad. The stage filled with an orange-red glow as the Spanish lyrics filled the air.

As the show went on, the children got up and danced, sang louder, and were even able to help create a song alongside Chavez. Parents helped throughout, clapping along to every song and occasionally attempting to sing louder than their children.

When the show ended, both parents and children left the room with smiles on their faces.