Speechwriter and podcaster Jon Lovett, famous for hosting podcasts such as Pod Save America and Lovett or Leave It, gave a comedic discussion at Hancher Auditorium to discuss the upcoming Iowa caucuses. 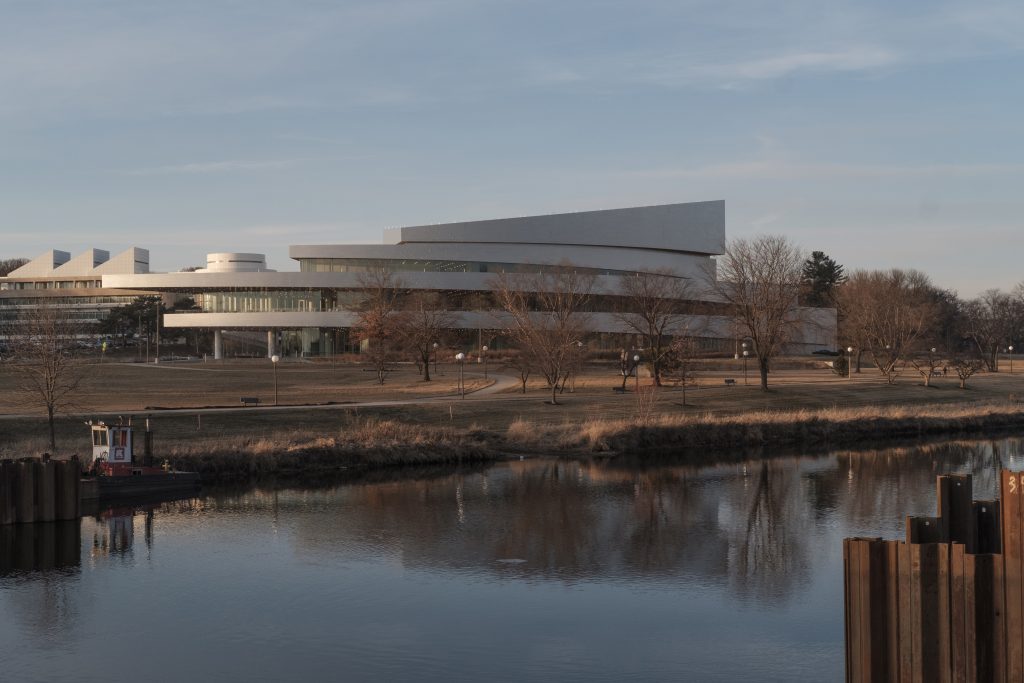 Sitting down to tune in for a live podcast, audience members flooded Hancher Auditorium ― whether they wore an Elizabeth Warren sticker or Bernie Sanders T-shirt ― to see former President Obama speechwriter and podcaster Jon Lovett give a talk on the Iowa caucuses last Thursday night.

Before Lovett took the stage, a projector in the background depicted President George Washington wearing a clown nose, plastered on a sketch of Iowa. After making his appearance, he was greeted with a roaring applause.

Similar to the style of his podcast, Lovett formatted his act like a television show, treating his audience with quizzes and segments.

“You gotta love other people before you love yourself,” he said, in reference to Bloomberg never visiting Iowa.

Moore was the first guest to accompany Lovett, donning a Hawkeye hat as he walked on stage. Aside from comedic banter, the two immediately transitioned into Moore’s previous endorsement of Vermont Independent Senator Bernie Sanders.

Moore said Democrats should not take President Trump for granted in the primaries, saying this was largely why he believes Trump won the 2016 presidential election.

“Understand that the R can win again,” Moore said, referencing the Republican party. “The question should come down to fight for what you believe in.”

Walker said that because Iowa has a predominantly white population, the state isn’t reflective of the Democratic Party.

Despite all of the games and light-hearted jokes, Lovett changed his tone and discussed how Democrats need to vote based on removing Trump from office.

Ally Wobe-Bowen, an audience member from Maryland, said she’s been following the show before the 2016 election and she enjoys the style of humor they incorporate while discussing politics.

“His message is really cool, that we all need to come to the primaries, no matter what happens,” Wobe-Bowen said. “I know it’d be really hard for a lot of people if their candidate wasn’t there, but we really need to fight Trump together.”

“I really like the variety of guests and how it brings a humorous, non-straight view to politics,” Brown said.

Throughout the night, Lovett emphasized how the Democratic party needs to become united, ending his event with a message of unity.

“No one will know how this will end,” Lovett said. “The differences are real. Whoever we nominate, support them like hell.”

Editor’s note: The story initially incorrectly said “Walker said Warren seemed to be a popular second contender, but he also said too many people in Iowa feel undecided on who to caucus.” The DI has corrected that statement to reflect Walker said Sanders is a top choice for many Iowans.