Hawkeyes looking to stay on top against No. 2 Penn State

Iowa and Penn State are two of the most renowned teams in all of college wrestling. Tonight, the two programs will square off for the right to be No. 1 in the nation. 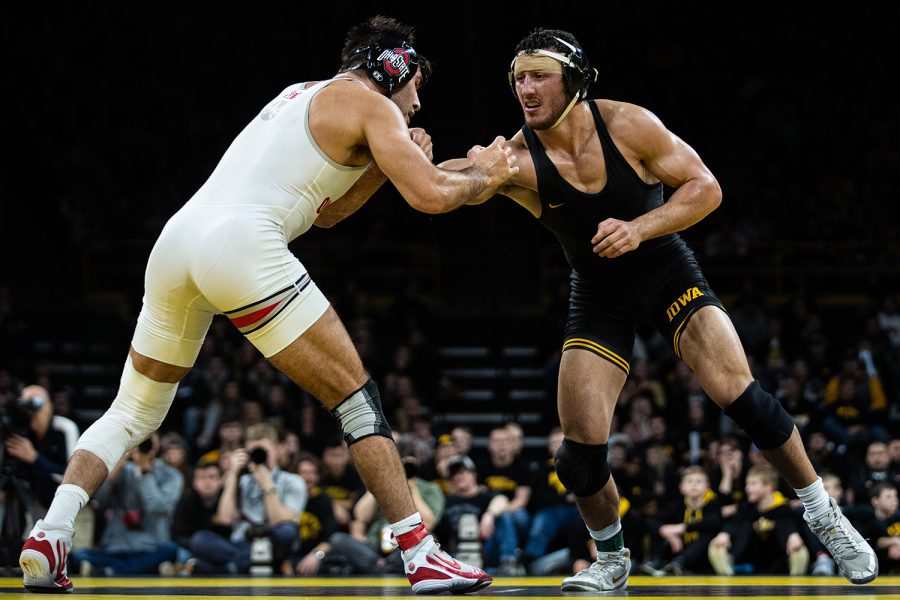 Iowa’s 174-pound Michael Kemerer wrestles Ohio State’s Kaleb Romero during a wrestling dual meet between No. 1 Iowa and No. 4 Ohio State at Carver-Hawkeye Arena on Friday, Jan. 24, 2020. No. 2 Kemerer defeated No. 8 Romero by decision, 6-1, and the Hawkeyes defeated the Buckeyes, 24-10.

A Penn State-Iowa wrestling dual at Carver-Hawkeye Arena — it doesn’t get much better than that.

Over the past nine years, the Penn State has dominated the landscape of college wrestling. The Nittany Lions have taken eight of the last nine NCAA titles, stumbling only once in 2015 when Ohio State won it all.

This season, Iowa wrestling has been an unstoppable force, blowing past ranked opponents like a runaway freight train. The Hawkeyes have defeated No. 9 Wisconsin, No. 18 Iowa State, No. 16 Princeton, No. 13 Purdue, No. 6 Nebraska, and No. 3 Ohio State. Iowa has not surrendered more than ten team points in any of those matchups.

Despite differing records, the two teams have many similarities. Both teams have an abundance of wrestlers hailing from Pennsylvania. According to the teams’ probable lineups, as many as seven wrestlers from the state could hit the mat at Carver.

Four of those wrestlers are Hawkeyes: Spencer Lee, Austin DeSanto, Kaleb Young, and Michael Kemerer. Max Murin is also from Pennsylvania, but he will not participate in the dual.

“[Recruiting in Pennsylvania] is not part of the plan unless they’re the right guys,” Iowa head coach Tom Brands said. “Kaleb Young was the first to commit [to Iowa] as a junior. Mike Kemerer was a year older than him, and he was the first one to sign a letter of intent. That started it going. The important thing there is that if those guys aren’t fits and it doesn’t make sense, then we’re not just recruiting those guys because they’re from Pennsylvania. We’re recruiting those guys because they’re the best in the country and they fit our needs.”

One of the most notable Pennsylvania products on the Nittany Lions’ roster is Vincenzo Joseph. Joseph is ranked first in the nation at 165 pounds. The reigning NCAA runner-up is 7-0 on the season.

Joseph will likely see No. 2 Alex Marinelli. The reigning 165-pound Midlands Champion is 14-0 this season, winning seven of his matches by fall. Marinelli is 16-0 at Carver and 2-0 all-time against Vincenzo Joseph.

No. 2 Michael Kemerer and No. 1 Mark Hall will also engage in a showdown for the right to be ranked first at 174-pounds. Hall and Kemerer are both undefeated this season.

“This is one versus two in NCAA wrestling with a sold-out crowd” Kemerer said. “This is what it’s all about. To be able to perform in that, and compete in that environment, it’s a blessing, and we’re excited for it.”

Anticipation has been building for tonight’s dual since Dec. 6 when the Hawkeyes announced that the meet was sold out.

Tonight, the dual the entire wrestling community will be watching has finally arrived.

“[Fans] want to see great wrestling, and we’re entertainers,” Marinelli said. “The fans are going to want to come to a dual that’s number one Iowa versus number two Penn State. They love Iowa wrestling. If you’re not an Iowa Hawkeye or an Iowa Hawkeye fan, then you’re still going to watch the Iowa Hawkeyes because you love hard wrestling and fighters. [Tonight] is going to be awesome.”