The president and his campaign’s behavior at a Thursday rally was glaringly incompetent, especially given the administration's record of attacking the free press. 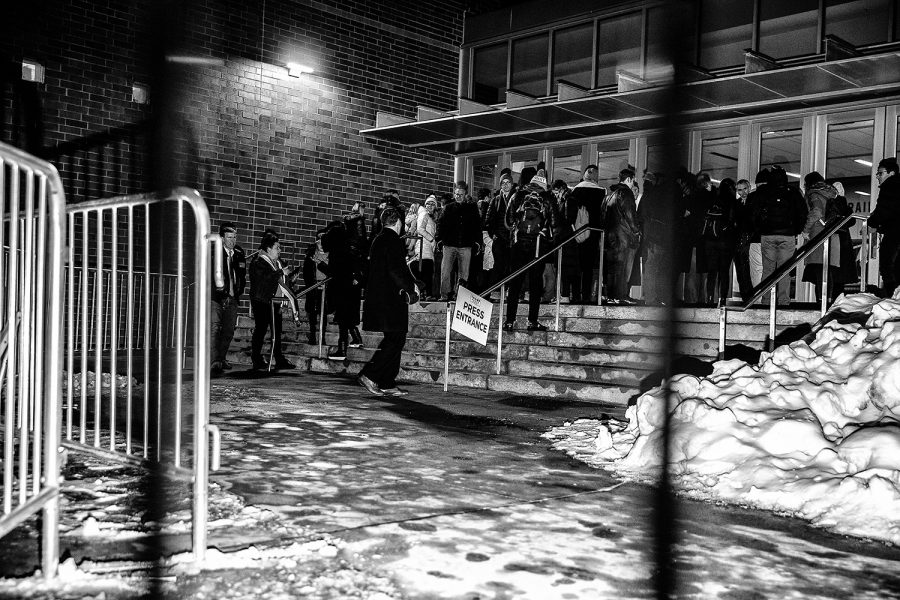 Media members stand outside the press entrance for a rally for President Donald Trump at the Knapp Center on Thursday, January 30, 2020. Hundreds of individuals including supporters, protestors, and members of the press were left outside after the event reached maximum capacity.

President Trump likes to brag about the crowds at his campaign rallies, with many supporters supposedly kept outside because of capacity concerns. At his Thursday event in Des Moines, it was members of the press who were left out in the cold, along with ticketed guests.

Even though photos The Daily Iowan reviewed from reporters present showed empty seats in the press room after the 6:30 p.m. cutoff time for media access, and even though the DI was credentialed days in advance, the DI was one of several news outlets barred from entering the venue.

Other outlets with correspondents shut out from the rally included NPR, New York Magazine, The Daily Beast, and Carroll Times Herald. Security officials told members of the media waiting outside that the venue was at capacity, so the fire marshal wasn’t permitting more people to enter.

Accurate. We were yelled at several times by a Trump press staffer. At one point we were herded by said Trump press staff to line up down a sidewalk only to be yelled at minutes later by Secret Service bc we were in their way. Totally unnecessary. No communication. https://t.co/eyb2qEFQn7

While this exclusion could have been a legitimate capacity problem, it seems unlikely given what is known about the president and his campaign organization.

The most conspicuous reason for conclusions about wrongdoing is Trump’s behavior toward the press, especially coverage he judges as unfavorable to him. During his rally, the president repeatedly railed against the “fake news” while pointing to the sparse press that was allowed to attend.

And it’s not as if the Trump campaign meant to keep his Des Moines speech secret. We know about the comments on the “fake news” and other topics because the event was streamed online. This isn’t primarily about obstructing the flow of information.

This is about intimidating the free press, and it cannot stand in America. Journalists are more than a campaign-rally prop and a target for Trump’s jeers. The right to a free press is enshrined in our nation’s Constitution — listed after free speech, which the president thoroughly exercised Thursday night.

The second reason it appears unlikely that an honest mistake was made is because of the press’ history with the Trump campaign machine. In the past, members of the Trump team have insulted, yelled at, and physically confronted reporters doing their job. It would not be inaccurate to say Trump’s misgivings about the free press extend to those he employs to help him win elections.

The DI asked the Trump campaign for comment on the processes that lead to our exclusion from the event.

Did the campaign plan for overflow press? Why did they approve credentials for reporters for whom there apparently wasn’t space? What was their rationale?

A Republican communications staffer answered a phone call, requested to be emailed instead, and did not respond to questions sent via email Thursday night.

As members of the free press, we are obligated to report on important events such as Thursday’s rally. We have traveled before from Iowa City to Des Moines to cover the president. We will continue to do everything we can to seek truth and report about any relevant cross section of our government’s leader and our Hawkeye State.