The University of Iowa Faculty Council discussed how to structure a model to allocate proceeds from the UI’s utility system public/private partnership. 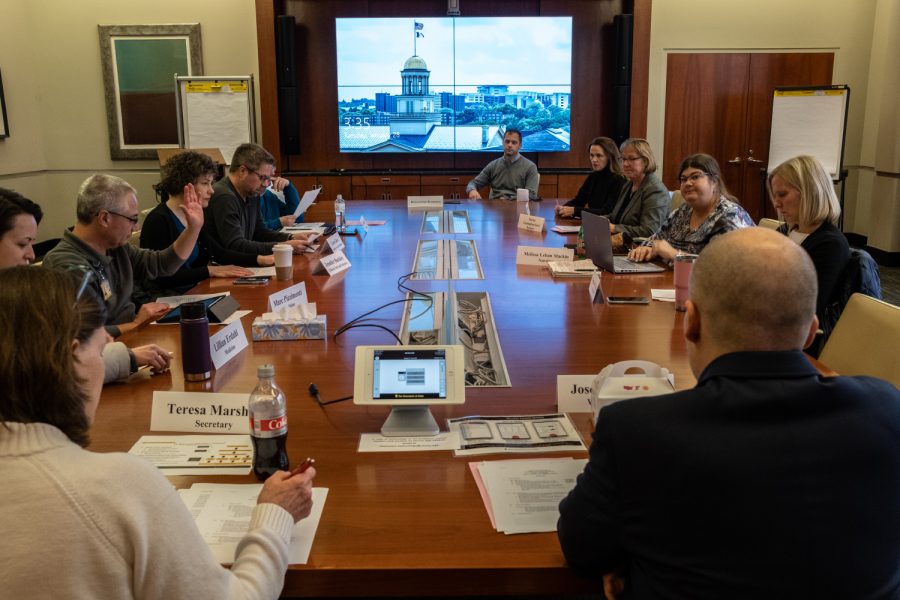 The University of Iowa Faculty Council on Tuesday discussed how to structure the task force responsible for allocating the proceeds from the UI’s utility system public/private partnership — an agreement with a private entity that is expected to generate $3 billion in a new endowment over the course of the 50-year deal.

Faculty present at Tuesday’s meeting raised questions about how the resource-allocation model would be structured in a way that ensures those resources would be equitably distributed among the colleges.

“The true goal of this is that the good ideas do not emanate only from Jessup Hall or from the dean’s office,” Vice President Peter Matthes said during a presentation about the proposed model. “In fact, they rarely do — especially from Jessup Hall — so we need to find a way to get those out into the rest of campus for everybody to work together to build those ideas going forward. You all are closer to the issues that we need to solve.”

Matthes told The Daily Iowan the proposal will not go through a formal voting process with shared governance, though administrators are engaging with them to establish the allocation process.

Under the proposed process, anyone may submit ideas for a one- to five-year grant impacting the university’s strategic plan. Then, the Path Forward work groups — which help execute certain pillars of the strategic plan — prioritize proposals, the Path Forward Steering Committee determines if proposals are eligible, and the university Budget Review Board makes final decisions on requests.

Matthes told the Faculty Council the UI has currently not provided directions to the deans within each college, as the “rules of the road” have not yet been determined. He said the goal is to determine the rules for the grant process by April and receive the first round of proposals in fall of 2020.

The UI receives the partnership proceeds after financial close March 10. French firms ENGIE and Meridiam, forming concessionaire Hawkeye Energy Collaborative, provide the UI an upfront lump sum of $1.1 billion. After that step, the UI will invest the net proceeds — around $999 million after paying utility system bond debt and consultant fees — into a new endowment where it will grow over 50 years to an estimated $3 billion.

In fiscal 2021, the budget year beginning July 1, the UI plans to distribute $7.5 million of the partnership proceeds. Beginning fiscal 2022 and every year after, the UI expects to distribute $15 million annually from the endowment.

Allocations will not be distributed based on college size, Matthes told the Faculty Council, but the strategy to distribute grants has not yet been determined.

The Path Forward Work Groups contain a mix of campus faculty, staff, and administrators. The College of Nursing dean sits on the Diversity, Equity, Inclusion, and Collaboration work group, and the College of Public Health dean serves on the Engagement work group.

Asked about the advantages that those deans would have over deans who are not on the Path Forward work groups or the steering committee, such as the College of Liberal Arts and Sciences, Matthes told the DI: “That gets to the way in which this task force working to set up the rules of the road — they will be able to work to find ways to ensure fair, equitable distribution, based on the merits of the proposals.”

Other peer institutions — notably Ohio State University with its own energy system — have implemented public/private partnerships, and UI faculty discussed how practices at other universities may compare with the UI’s own model and measures.

Matthes said OSU’s partnership is comparable to the UI’s, though its process of spending dollars differs greatly from the UI. He said OSU allocated a percentage of its deal to sustainability concerns at the institution and faculty matters, leaving a portion of the dollar amount to the university to decide where to dedicate funds.

The UI plans to stay open and specific in how it plans to implement the deal, Matthes said.

“The more transparent, open we can be about that … the more credibility we have with our constituents,” he said. “… Not only the constituents on campus, but our constituents across the state our alumni, our students, our parents — all of these folks need to understand how we’re utilizing the university’s assets of the utility plant to receive these additional dollars, and then what are we doing with that in order to impact the future.”