Under the rules for the 2020 Democratic caucuses, caucusgoers in viable groups will not be able to move after the first alignment, including the uncommitted group. Some campaign operatives are using this to encourage Iowans to commit to their candidate, but some organizers say uncommitted viability shouldn't be a concern. 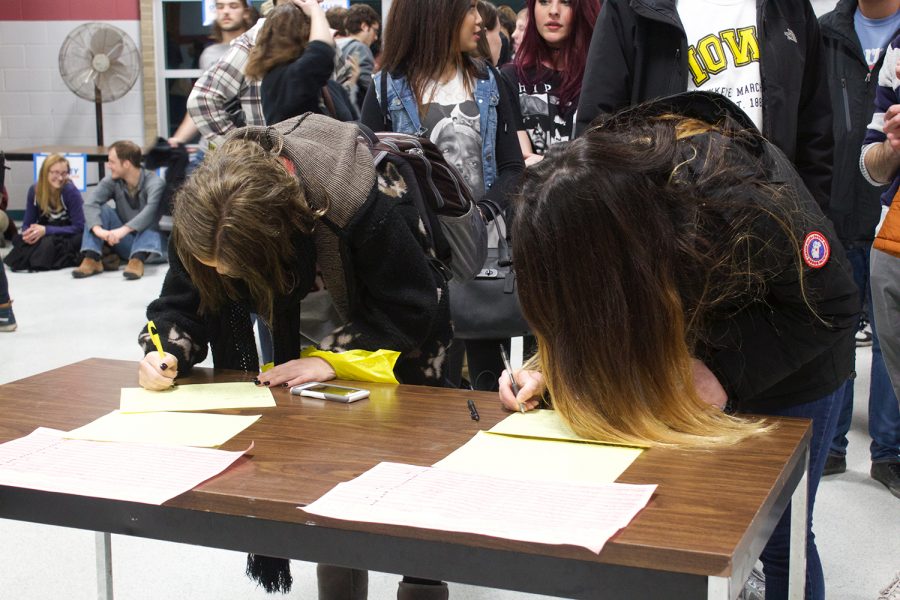 Students and members of the community sign in to caucus for the Democrat Party in the Robert Lee Rec Center on February 1, 2016.

The Democratic caucuses serve as a place for Iowans to have an open discussion with their neighbors and fellow Democrats to try and convince them to support a given candidate. This long-standing tradition could have an unexpected wrinkle this year, Democratic campaigners say, because of a rule change that could leave undecided caucusgoers stuck in a viable group.

Democratic operatives are encouraging Iowa caucusgoers to declare support for a candidate in the beginning of the caucus-night process — even if they may not intend to see that candidate through to the end — to prevent the uncommitted group from securing viability.

At a Democratic caucus, Iowans begin by breaking up into groups based on their candidate preference. Due to a new rule change outlined in the Iowa Democratic Party’s 74-page Delegate Selection Plan, if a group gains viability — reaches 15 percent of attendees’ support and earns a delegate for the county convention — those caucusgoers are locked in and unable to switch to another group.

Speaking to a small group of campaign volunteers on Jan. 12, U.S. Rep. Katie Porter, D-Calif., a co-chair of the Elizabeth Warren campaign and former faculty member at the University of Iowa College of Law, said she met with a number of long-time caucusgoers who were unaware of the new changes.

“Most of them were very surprised to learn about the new rule about being undecided, and if you’re a viable group of undecided, then there you stay,” Porter said. “So, I think the message really is, both to you as organizers and volunteers … the time is now for people to be making up their minds.”

In an October interview with The Daily Iowan, Iowa Democratic Party Chair Troy Price said the change was made to eliminate confusion, cut down on time, and prevent caucusgoers in viable groups from switching to a nonviable group in order to take a delegate away from an opponent.

He saw this play out in 2016 when groups for Sen. Bernie Sanders, I-Vt., and former Secretary of State Hillary Clinton were fairly equal in many precincts. Former Maryland Gov. Martin O’Malley was the Democratic candidate struggling to gain viability, and Price said supporters for Sanders and Clinton in various precincts would sacrifice people to O’Malley’s group to make him viable, taking a delegate from the other group while not losing any themselves.

John Deeth, a Democratic caucus organizer in Johnson County, said people will often caucus uncommitted initially in order to see how the caucus is shaping up, and then switch on the realignment. Under the new rules, Deeth said caucusgoers have to be careful to not let the uncommitted group get too large.

“You’ve gotta keep track of, okay, is uncommitted going to be viable or not?” Deeth said. “And if it’s getting late in the first alignment and uncommitted is viable, you might have to make your move sooner than you wanted to.”

Deeth has expressed on social media that he doesn’t see the potential of an uncommitted group gaining viability being a large complication in the caucus process.

Things caucus chairs should be thinking about:
1) recruiting volunteers
2) checking in at location
…
725) counting guests
726) what if Uncommitted is accidentally viable

The number of Democrats who caucus uncommitted has fallen throughout the history of the caucuses. In 1972, when the Iowa caucuses first moved to the front of the national nominating process, uncommitted won the most delegates with 36 percent, edging out then-Senator Ed Muskie. By 2008, that number had fallen to just 0.1 percent.

UI political-science Associate Professor Timothy Hagle, who wrote a book about the 2012 Republican caucuses, said the popularity of uncommitted has fallen as Iowa has gained more attention in the national campaign process.

“The reason that undecided has dropped off is that we in Iowa are getting much more attention, and we have many more opportunities to actually evaluate the candidates,” he said. “So, what we decide is a bigger deal.”

Linn County Democratic chair Bret Nilles noted that people who want to avoid choosing a candidate could still do so without caucusing uncommitted, if they’re worried about reaching viability.

Because a caucus has no formal ballot access process, caucusgoers can caucus for anyone. Nilles said people who are undecided could caucus for someone who isn’t running to avoid being in a viable group.

“Those people who really can’t decide and want to see what happens, their best bet might be to be uncommitted for somebody who’s really out of the picture, like Tim Ryan,” Nilles said, referring to the U.S. Representative from Ohio who dropped his bid for the presidency in October. “… He won’t have a viable group, so you’re not in danger of being in an uncommitted group that is viable.”