In the launch of its MediaWise Voter Project at the University of Iowa Friday, the Poynter Institute encouraged students to approach media by performing fact-checks, listening to opposing viewpoints, and questioning each image, caption, or meme. 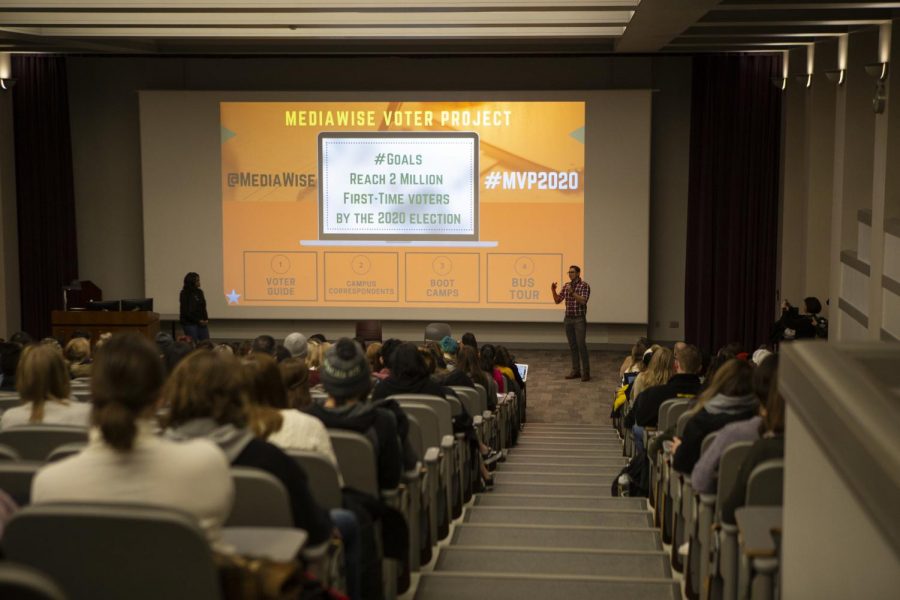 The Poynter Institute’s MediaWise Voter Project kicked off its national media literacy program at the University of Iowa on Friday, where staff members and social media celebrity Tyler Oakley encouraged attendees to perform media fact-checks as they prepare to vote in the 2020 presidential election.

The project stems from Poynter’s digital literacy program MediaWise, which teaches middle and high school students how to discern what’s real from what’s fake in media, according to a press release. Funded by Facebook, the newly-launched program aims to reach 2 million first-time voters by the 2020 election, said MediaWise senior multimedia reporter Alex Mahadevan.

According to a study by New York University, Mahadevan said, there were over 187 million engagements on Instagram from “Russian troll farms” that disinformed the voting public between 2015 and 2018.

“That plays into this election because we have what looks like 7 or more million first-time voters who are going to be scrolling through their Instagram feeds, seeing probably way more engagements than we saw in previous elections,” Mahadevan said.

More than half of college students don’t fact-check information before they share it online, he said, so the voting project hopes to stamp out “weaponized” sharing on social media, referring to the power of retweeting false information.

Oakley opened the main event, fielding questions from MediaWise staff about his experience with misinformation in the media. Since the outcome of the 2016 election, he said, there seems to be much more information circulating “every single hour of every single day.”

Although he felt confident campaigning in the last presidential election, Oakley said he’s taken on a different mindset for 2020.

“One thing that I think I’ve found is the more people know, the more people are educated, the more people understand the difference between fact and fiction, the better we’re all going to be,” Oakley said. “Especially when we’re thinking about our friends and our family.”

He emphasized how a variety of factors can influence an individual’s number one motive for voting someone — a passion of theirs that a candidate reciprocates. Oakley cited his own support for LGBTQ+ rights, such as work discrimination, adoption rights, and more, and how it impacts his vote.

“I think it gets challenging when everyone has their own number-one thing,” Oakley said. “You don’t have to necessarily agree with everyone on what your number-one thing is, as long as you get involved in whatever way you can.”

For example, he said, voters can locate a nonprofit or organization that advocates for their number one political issue, and see how those groups feel about certain candidates, local legislation, and more.

The MediaWise Voter Project presentation continued by acknowledging what the program called the “biggest threats” in the 2020 election, such as miscaptioned memes or images, fake news sites, and manipulated videos.

“These things are shared so quickly and easily just like that, and we don’t take the time to fact-check it,” said MediaWise multimedia reporter Heaven Taylor-Wynn.

Other activities included tutorials on how to easily fact-check social media, how to spot native advertising, and the development and permeation of artificial intelligence and disinformation in media today.

Taylor-Wynn and Mahadevan both emphasized the need for the audience to approach all media with the same three questions, suggested by the Stanford History Education Group: Who’s behind the information? What’s the evidence? What are other sources saying?

The pair added a question asking whether the media an individual is consuming makes them angry, emotional, or anxious. Taylor-Wynn brought the event to a close by also encouraging the audience to ask if the media they are consuming simply confirms their preexisting world view.

“Chances are you’re not going to think twice about it, you’re going to immediately share it because it’s something you agree with,” Taylor-Wynn said. “But that’s a lot of times what drives us to share things that may or may not be true.”

Oakley affirmed this approach, stating that the 2016 election is proof that voters need to hear information outside of what reaffirms their preexisting beliefs. He suggested that the audience consider following people on social media who may provide an opposing viewpoint to their own.

“Spending some time listening to the other side helps me at least prepare to have those difficult and challenging conversations that are just sometimes an eye roll, but to know where they’re coming from — it helps me to formulate my own perspective,” Oakley said. “I find it a lot more helpful to listen to actual dialogue between people that maybe don’t agree.”