The University of Iowa will relocate the Student Disability Services temporarily to the Old Capitol Mall in response to student advocacy for a more accessible location. 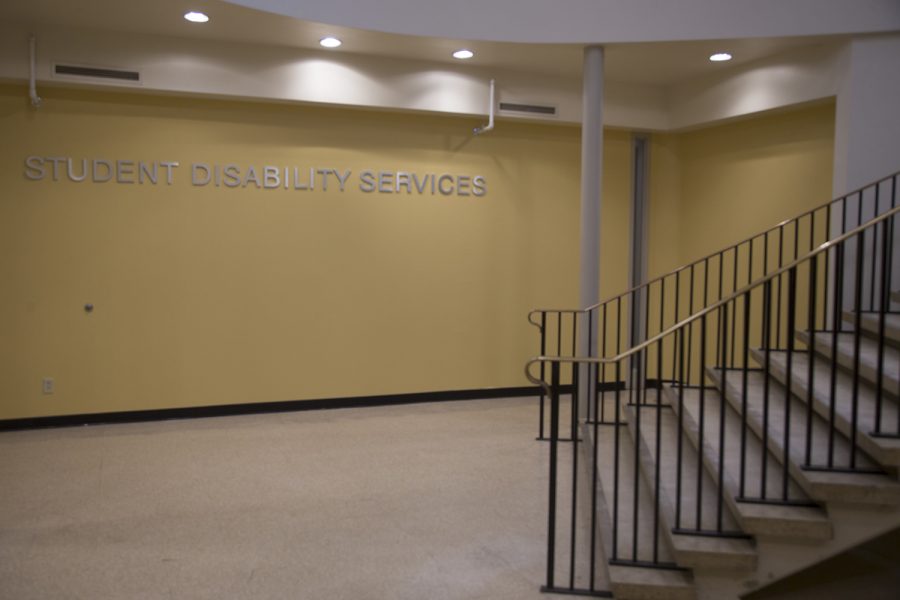 The outside of the UI Student Disability Services office is seen on Wednesday, June 5, 2019. The office is located in the basement of Burge Hall.

The University of Iowa shared plans on Wednesday to temporarily move the Student Disability Services office by fall 2020 after nearly two years of conversations about providing a more accessible location to students with disabilities.

UI Provost Montserrat Fuentes discussed the plans at the annual Diversity Equity and Inclusion update Wednesday evening. She told The Daily Iowan Tuesday that the temporary office will cost around $50,000 to relocate to the first floor of the University Capitol Center, occupying nearly 5,600 square-feet across from Panera Bread.

The current office is located near the foot of a staircase leading down to the basement of Burge Hall, accessible by an out-of-sight elevator.

“We want to make sure that the space has all the accommodations for the students,” Fuentes told the DI.

Data from the Provost’s Office and the Division of Diversity, Equity, and Inclusion shared Wednesday showed that in 2015, 742 individuals with disabilities were enrolled at the UI. That number grew to 1,293 individuals in the fall of 2019.

Fuentes said the project is suspected to be a three- to five-year solution while UI officials discuss a long-term location.

In October 2018, UI students urged the administration to relocate the office out of the Burge Hall basement through a petition circulated around the UI. That petition gained more than 3,000 signatures from the UI community, the DI previously reported.

“It’s pretty thrilling to see something that a few years ago seemed almost unachievable, actually come to life, almost within the time that I’ve been here at Iowa,” said Kaydee Ecker, UI Students for Disability Advocacy and Awareness president.

“We want to take that approach because what we know is that we are getting ready to make a decision that will be a 50- to 75-year decision, and a lot of the students who are currently here will graduate and may not see this facility or this relocation come to be,” Shivers told the DI in October 2019.

“But, what we want to do is make sure that we are memorializing for the campus that we had a campus discussion about this topic, that we had decided that this is something that we really need to pay a lot of attention to, to find a location, a suitable location, for our student disabilities services,” she said.

The Division of Student Life held a town hall in November 2019 to address concerns surrounding the current location in Burge Hall and develop ideas for a new potential location.

“It’s been a long time coming,” Ecker said. “I am really excited for all the students that are going to be able to benefit for the new location in the temporary space.”

Fuentes also mentioned the UI is moving forward in responding to a Student Disability Services review to enhance academic support for students with disabilities.

According to data from MAUI with the Office of Assessment, the share of students who use disability services who returned for their second year of college dropped in the last four years. Of the 2014 cohort, 92.8 percent returned for a second year, while 87 percent of the 2018 cohort returned.

“We have seen a decrease over the last few years in the retention as well as the graduation rates [of students with disabilities], so [we are] also enhancing the academic support for this,” Fuentes said.