Painting the town purple: The Color Purple comes to Hancher

Members of the touring cast of The Color Purple share their experiences bringing a literary classic to stages across the nation. 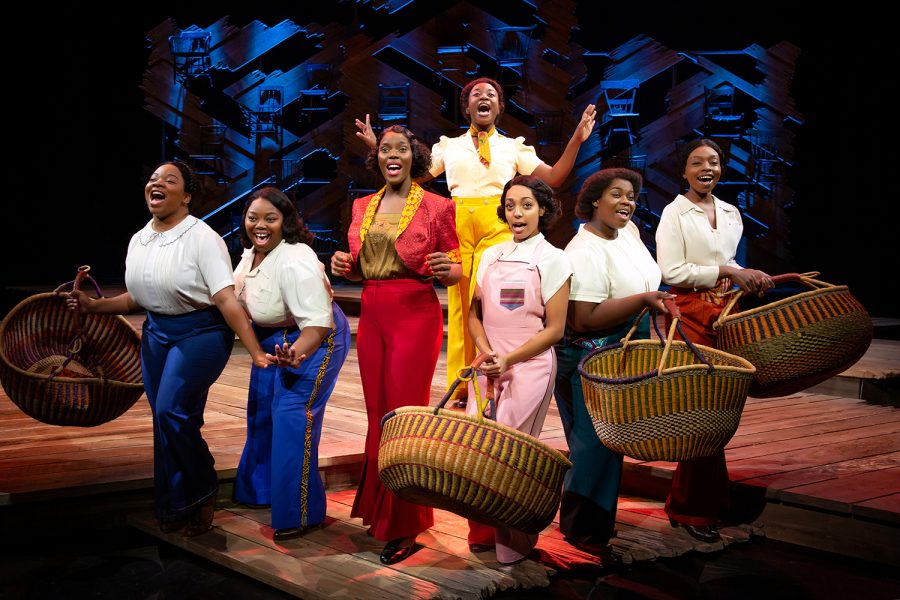 The Color Purple has gained massive popularity since its literary début in 1982. Whether the story is on the page, screen, or stage, it has resonated with audiences for decades. Now, the fourth national tour of its musical adaptation is currently making its way to Iowa City for performances on Jan. 24-25.

The Color Purple details the 40-year struggle of Celie, an African-American woman who must discover her inner strength to overcome years of abuse and self-doubt.

The show will have no problem finding success in the community, said Rob Cline, Hancher director of marketing and communications.

“We like to present several Broadway shows a year…” Cline said. “But we’re also presenting it because we think this story will resonate with a lot of people. We especially like that this show is based on a beloved novel. That’s a great fit for a community that cares about reading and writing as much as Iowa City does.”

Before coming to the stage, The Color Purple received several literary accolades, including the Pulitzer Prize. The book, written by Alice Walker in the early ‘80s, was quickly adapted in a screenplay that was directed by Steven Spielberg in 1985.

Spielberg received an Outstanding Directing award from The Director’s Guild of America for his work on the film, but he was far from the only big name involved with the project. The star-studded cast included Whoopi Goldberg, Oprah Winfrey, and Danny Glover. Goldberg received an NAACP Image Award for Outstanding Actress in a Motion Picture for her role as Celie.

Even 35 years after the film’s release, the story remained relevant.

Brandon A. Wright, who plays Sofia’s husband Harpo, said the show has the potential to resonate with anyone because of its core themes.

“It’s a timeless story,” Wright said. “It has messages that transcend time. Messages of hope, and faith, and love, and triumph. I think those are things that will always be relevant to the human experience.”

“As long as you bring truth and passion to the role, it relates to everyone, no matter the time period,” Arielle said.

Wright said that ensuring that each audience member leaves feeling uplifted is key.

Although the show’s themes are universal, The Color Purple is especially relevant to people of color. For Wright, the opportunity to tell an iconic story with performers of color is unparalleled.

“It’s important as an actor of color to be surrounded by other people of color who share a passion for art,” Wright said. “The icing on the cake was being able to travel to all these beautiful cities to tell this beautiful story.”

Another aspect Wright enjoys about touring is meeting audience members in each city they visit, but he recalled one interaction with an audience member that was particularly memorable.

After the show, a woman asked for a photo with Wright. As he went to stand next to her, the woman said, “No Harpo, no. I want to be like Sofia.”

She proceeded to push Wright into a chair so she could take a photo on his lap. Wright said it was one of his favorite moments from the tour.

Arielle had an equally memorable moment with some young fans.

“These little kids came up to me after the show and told me that Sofia was their favorite and they wanted to be like her,” Arielle said. “They looked 7, 8, 9 years old. I’ll never forget those kids because I used to be like those kids.”

Growing up, Arielle watched the 1985 film adaption of The Color Purple with her older cousin. In the film, Oprah Winfrey played Sofia.

“I’d rewind Oprah’s big monologue over and over again until I memorized it,” Arielle said. “My cousin used to get so mad at me, but I didn’t care.”

Soon after that, Arielle fell in love with theatre, and The Color Purple was set to be her school’s play. Arielle wanted to audition but ended up backing out because of stage fright.

Instead, she became the props manager for the show and watched it from backstage each night. Now, Arielle finally gets to play her childhood dream role.

There are a few key messages that Arielle hopes the audience will take away from her performance as Sofia, as well as from the production as a whole.