In an effort to advance academic engagement, mentoring, and connection on campus among first-generation students, the University of Iowa is implementing a new Hawkeye First-Generation Initiative. 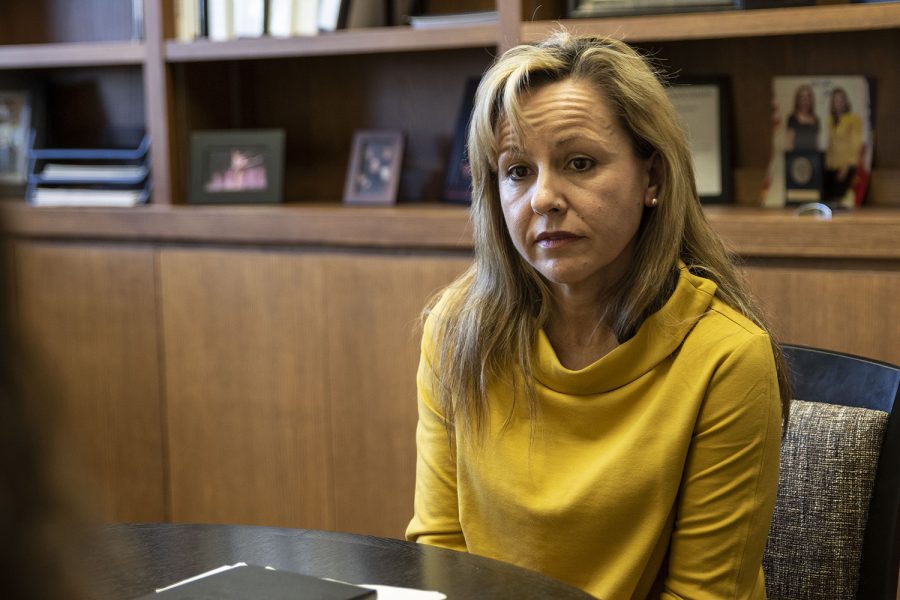 Provost Montse Fuentes speaks in an interview with The Daily Iowan in Jessup Hall on Tuesday, Jan. 21, 2020. Fuentes sat down to discuss new plans to improve support for first-generation students.

The University of Iowa Provost’s Office on Tuesday unveiled an initiative to help retain Hawkeyes who identify as the first in their families to attend college.

The Hawkeye First-Generation Initiative will launch in summer 2020, in time for the 2020-21 academic year. It was developed in response to data showing that many low-income students who identify as first-generation are at higher risk in academic achievement and social skills than their peers on campus.

UI Provost Montserrat Fuentes told The Daily Iowan on Jan. 21 that the UI will randomly select approximately 200 incoming first-generation students to participate in the program to avoid any bias. An assessment will be conducted at the end of the year.

“The metrics that we want to look at closely is retention, sense of belonging, and graduation rates,” she said.

“When [first-generation] students arrive here, they come with the same pre-college achievement as their peers,” Fuentes said. “However, they don’t have the benefit of family experience that all their peers have, and they tend to encounter more difficulty in getting the support that they need.”

Fuentes said the UI defines first-generation students as being without parents or legal guardians who have completed a four-year education. Within the incoming class, she said, 22 percent of students are first-generation.

Among group retention between students’ first and second years at the university, Fuentes said these retention rates have continued to decline even from fall 2018 to fall 2019, she added.

Retention rates for returning first-gen students in fall 2019 was at 76 percent, Fuentes said, while the overall return rate for the class was 86 percent.

“It’s a very significant gap, and that requires a call for action to make sure that we are here to do what is expected from us …” Fuentes said.

UI Academic Support and Retention Director Mirra Anson said research is promising and shows that once the university integrates multiple evidence-based initiatives, the share of first-gen students who return for a second year will grow.

Powerful factors of the initiative include peer mentoring, coaching in various forms, close connections with faculty, and more, Anson said. An implementation team is currently under construction, she added, and will be comprised of faculty and staff.

“I think first-gen student success really has been part of a national discussion for … years, as it should be, so I’m hoping that this initiative can evolve into a model,” Anson said. “But I’m also hoping that we can strengthen the model by looking at what other institutions are doing and adopting that practice.”

Based on data from surveys within her office, Anson said there are certain factors correlated with a student’s probability in continuing their university education, such as grade point average, a sense of belonging, and engagement with peers. First-generation students specifically are less likely to say they feel like they belong, she added.

When students say these things matter to them, it’s important to make sure the university responds with a “We hear you,” Anson said. Once student voices are heard, the UI must consider how to change the system accordingly to better serve them, she added.

“We’re excited to learn areas where we can improve and celebrate their success,” Anson said. “I think it represents a real institutional commitment — particularly to support our first-gen population.”

In an interview with the DI in September 2019, UI President Bruce Harreld said the university aims for at least 20 percent of students on campus to be first-generation.

“We welcome first-generation students,” Harreld said. “… We’re going to put the support systems in place so that students and their families know what comes with it.”

The Hawkeye First-Generation Initiative will place a heavy emphasis on engagement not only with first-generation students but also their families by building relationships between the latter and the UI before the beginning of classes and over the summer, Fuentes said.

There will also be additional support from faculty, exposing incoming first-generation students to high-impact practices — opportunities that make the university more marketable but also help with academic engagement, she said. This will include research, mentoring, campus, employment, as well as service-learning courses.

While the new initiative will not replace existing first-gen programs on campus, Fuentes said each of these initiatives, old and new, will work together to be more intentional.

“This campus is so proud to welcome so many first-generation students,” Fuentes said. “… We believe they have great potential when they arrive here. We don’t see a difference between this group and their peers.”