Six contenders for the Democratic presidential nomination met in Des Moines on Tuesday in the final debate before the Iowa caucuses. Candidates and moderators keyed in on Iowa, mentioning the state 28 times throughout the night in questions and responses. 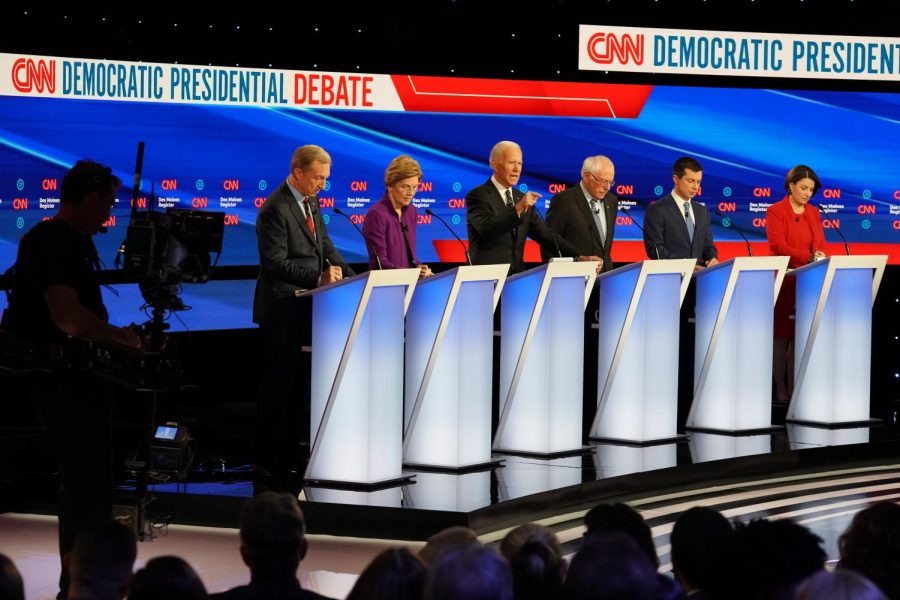 Six candidates made their final pitches to Iowans while together on a single stage Jan. 14, 2020 at the January Democratic debates hosted by CNN and the Des Moines Register. Photo available to The Daily Iowan from CNN.

Produced by CNN in partnership with the Des Moines Register, candidates and moderators mentioned Iowa a combined 28 times throughout the debate, making a personal appeal to caucusgoers in the state.

The candidates hashed out disagreements over issues that are on caucusgoers’ minds, as Register Iowa Polls show, including foreign policy, health care, and climate change.

Iowa Sen. Joe Bolkcom, D-Iowa City, who has endorsed Elizabeth Warren, said he thought the debate was the best one yet, and the candidates covered a lot of key issues that are important to Iowans. Chief among them, Bolkcom said, was which candidate had the ability to beat President Trump.

“One of the big issues on people’s minds is who can beat Trump,” Bolkcom said. “Iowa voters are going to make that decision in the next three weeks.”

“Iowa’s health-care system, like the rest of the country, is kind of in shambles,” Bolkcom said.

Democratic presidential hopefuls have floodedIowa for over a year, hoping to gain the coveted top spot in the first nominating contest on the road to the Democratic nomination. Six candidates qualified for Tuesday’s debate at Drake University:

The debate kicked off with the candidates debating who is best fit to handle international conflict with Iran, giving some candidates a platform to tout their foreign policy experiences.

Tensions with Iran have been escalating after Trump authorized the assassination of Iranian Gen. Qassem Soleimani in response to an Iranian attack on U.S. forces in Iraq that killed a U.S. contractor and wounded four servicemen.

Biden said his vote for the Iraq war in 2007 as a senator from Delaware was a mistake, but said he led the effort as vice president to bring troops home from Iraq and Afghanistan. He has focused much of his campaign on his foreign policy experience from serving as the vice president for eight years, and often says in his campaign advertisements that he knows the world’s foreign leaders by name.

Sanders said he lead the effort against the Iraq war, saying it was the worst foreign policy blunder in modern U.S. history.

Buttigieg used his position being the only veteran on stage to his advantage, having been deployed to Afghanistan. He said the U.S. can continue to be engaged in the Middle East without sending additional troops.

Steyer said he can provide an outside perspective to international tensions.

Warren said the only time she would use military action in another country without congressional approval would be if the U.S. was in imminent danger.

Trump has  justified the attack by saying the country faced an “imminent” threat from Iran, though in recent days news outlets have reported he has downplayed that claim. Some Democrats in Congress have scrutinized Trump for carrying out the assasination of Soleimani without telling members of Congress, questioning whether the move violated their powers to declare wars.

Sanders said he would not vote for the U.S.-Mexico-Canada agreement, a trade deal between the three North American countries that has yet to go into effect, because it does not address climate change. He said he will not vote for a deal that does not have strong provisions reducing fossil-fuel emissions. Steyer agreed, saying he will not sign a trade bill that does not tackle climate change.

Klobuchar, a member of the Senate Agriculture Committee, as well as Warren and Buttigieg, support the USMCA.

Iowa farmers have faced the brunt of Trump’s ongoing trade negotiations with China, with soybean exports from the U.S. dropping 75 percent between 2017 and 2018 according to CNBC, which cited data from the USDA. In Iowa, agriculture exports support 86,500 jobs.

China, Mexico, and Canada are some of Iowa’s leading trade partners on the agriculture front. According to the U.S. Agriculture Department, the USMCA would give preferential access for U.S. agricultural exporters.

Health care is a top issue for Iowa Democrats, and according to the latest Des Moines Register/CNN/Mediacom Iowa Poll, a majority of likely caucusgoers prefer a public-option plan.

Sanders, who led the most recent Iowa Poll and supports a Medicare for All plan, was asked a question about what would happen to insurance employees under a single-payer plan.

Sanders said the next president will have to stand up to greedy health-insurance companies, and cited the high costs of prescription drugs and health services.

According to the AARP, 30 percent of Iowans stopped taking medication as prescribed due to cost. It also reported that name brand drug prices increased 58 percent between 2012 and 2017 in Iowa.

The topic of health care has consumed much of the other Democratic presidential debates, and the candidates on stage Tuesday night stuck to their familiar messages and plans.

Warren said she would make reducing prescription drug prices a day-one priority, and Klobuchar is working with Iowa’s Republican U.S. Sen. Chuck Grassley on a bipartisan bill that would make it easier for generic drugs to enter the market.

Another issue high on Iowa’s priority list, climate change was a key part of the debate, and moderators made sure to make reference to Iowa floods that affected many communities and farms last spring.

Candidates stressed the urgency of taking immediate action on climate, saying the country is already seeing the adverse effects of climate change.

Buttigieg said he would devote more federal dollars to people whose livelihoods are affected by climate change, including Iowa farms that were impacted by floods.

“We are going to have to use federal funds to make sure that we are supporting those whose lives will inevitably be impacted further by the increased severity and the increased frequency,” Buttigieg said.

The U.S. House of Representatives approved more than $4 billion in flood relief for the Midwest in May 2019 following widespread flooding along the Missouri River.

Steyer repeatedly said that he was the only candidate who calls climate change his No. 1 priority, saying he would declare a climate crisis on day one of his presidency.

Sanders, who has made climate action a central plank of his campaign, said the proposals of some of his opponents were not aggressive enough to combat climate change.

“If we as a nation do not transform our energy system away from fossil fuel, not by 2050, not by 2040, but unless we lead the world right now … the planet we are leaving our kids will be uninhabitable and unhealthy,” Sanders said.

Democrats in the presidential race are split on college funding. Sanders and Warren have proposed universal tuition-free college, while the other candidates on the stage questioned the feasibility of those plans.

Buttigieg, whose plan involves tuition-free college for families making up to $100,000, said the government shouldn’t be using federal money to be paying for the children of wealthy families.

“We’ve got to be making sure that we target our tax dollars where they will make the biggest difference,” he said. “And I don’t think subsidizing the children of millionaires and billionaires to pay absolutely zero in tuition at public colleges is the best use of those scarce taxpayer dollars.”

Klobuchar, who opposes tuition-free college, said Democrats should direct their focus from college to apprenticeship programs and one- and two-year degrees.

“I think what we have to look at is how we connect our education system with our economy,” Klobuchar said. “Where are our job openings? And what do we need? We are going to have over a million openings for home health-care workers that we don’t know how to fill in the next 10 years.”

Not a single candidate of color qualified for Tuesday night’s debate. The only non-white candidates left in the race are entrepreneur Andrew Yang and Hawaii Rep. Tulsi Gabbard. New Jersey Sen. Cory Booker and former Housing and Urban Development Secretary Julian Castro, both people of color, dropped out of the race shortly before the debate.

Castro endorsed Warren after he dropped his bid. He returned this week to campaign for her, and applauded Warren for highlighting marginalized communities in her closing statement.

“I sat here in the break and just made notes about many of the things we didn’t get to talk about tonight: How the disability community is struggling for true equality… How trans women, particularly trans women of color, are at risk. Black infant mortality, climate change that particularly hits black and brown communities…” Warren said in her closing statement.

Castro told reporters after the debate that he hoped the moderators would bring in the topics of immigration, affordable housing, and police reform.

“[Warren] acknowledged that we didn’t get to a lot of critical issues that we could have been should have gotten to,” Castro said. “It shows that she has a heart and a mind for the people that too often get left behind in our country.”